Canada Day in the Country. 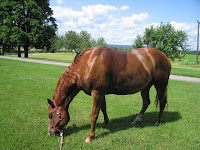 I must have been the only person heading OUT of town yesterday. I had the day off work, so I took the opportunity to go to the farm and work with Cherokee. My brother-in law, his wife and kids were visiting from TO so I was unable to ride on the weekend (the weekend was a blast though, enjoyed it entirely!)

It was a good day, not quite as hot as last week and, best of all, I had a newly mowed hay field to ride in. This is a big deal since little dude is barefoot and a little sensitive on gravel and the only place I've had to ride are the trails through the sugar bush. Great trails, but not great for really working on things. Plus, I felt I had donated enough blood to flies and mosquitos for one month. So, I got to pay attention to my form, dude's form, and work in eights, circles etc. Very useful. I didn't realize before that riding straight was an issue with him since on trails there isn't much choice. More to work on :-/

I wish I could upgrade this guy. Not that he's got it bad at all, but there are quite a few issues that I am just not able to deal with. I've tried, and I'm learning all the time, but working with him at most once a week is just not enough. Sigh. It's a shame because he really could be quite a nice little pleasure horse. Instead his owner is afraid to ride him and I'm the only other person making him think/work etc.

Last night Sasha was a bit exasperated with all my worrying and finally blurted out that he didn't understand why I felt so bad about all these animals that are not mine, nor my responsibility. It's just not about that, you know? It's about the animal. He knows that, he just hates to see me get all worked up about things I can't change.

Plus side? I know at very least little dude has a forever home as a pasture pet. He has plenty to eat, semi-decent pasture (supplemented with hay). I know he will never end up anywhere that would treat him badly or anything. The worst "crime" here is being under-used and hence not very marketable, which would be bad, except that he will never be sold.

Oh, and the standing-for-mounting is going much better. Not perfect, but much better. For the record, smack to the chest worked WAY better than all the longeing in the world. Still, it is very hard to do even basic stuff with no arena of any kind, no round pen or indeed anywhere "safe" to work. Just big wide open farm and lots of cows :)

Enjoy the pics of lil dude after a good workout and shower. 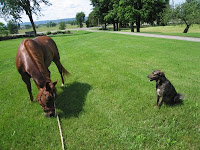 With Hazel, who had an even better workout since she ran beside us the whole time. I W-T about 97% of the time, but that translates to a lot of running for a dog! Hazel still thinks Cherokee is just a big dog. The horse doesn't know what to think, but I can say Hazel has been the best trainer when it comes to de-spooking this crazy horse. 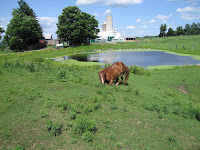 After cool-out, a shower and some "luxury grazing" (i.e., grazing on lawn that isn't pasture for anyone), set free to roll away. He often rolls while I'm still holding him, but he gets distracted by new patches of grass easily! I've noticed he prefers rolling on hills. What's up with that?? 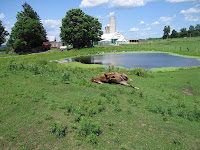 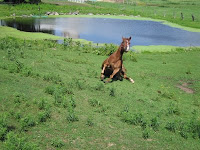 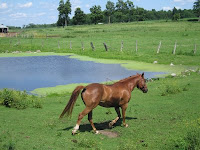 And now for more food! 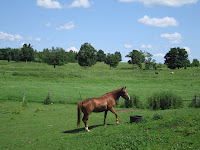 Hastily scribbled by RuckusButt at 9:50 PM