For the Love of Food

There is nothing like fresh produce. A feast for all the senses. Over the years, I've been trying to make smarter choices when it comes to the produce I buy. It started by trying to purchase more organic produce, as finances would allow.  As it happened, organic bananas are what really impressed me (try them sometime, the difference is incredible...not that

bananas are the most responsible choice out there anyway...)  Aside from finances, I didn't go too crazy because the certification and oversight just wasn't there, so you could be paying more but not really know what you are getting. It is still not perfect but there have been improvements.


Then, about three years ago, as my awareness grew and I started looking into things further, I started thinking: do I really need red peppers that were grown in Chile? So I began to pay attention to where things were grown and tried to choose produce that was  either (in order of preference): grown locally, in my province (or neighbouring province, I am close to the border), or in my country. I still purchased limes from Mexico and yes, peppers from Chile or Holland. Don't even ask me about the wine (oh alright, usually Italy).

Ontario is an amazing province for its agriculture but even the southern parts have a fairly short growing season. So I didn't get fanatical, I just tried to make informed decisions. I bought more turnips, beets, celeriac, and carrots during the winter and passed by the peppers more often. The citrus fruit, I rationalized, at least came from the same continent. I still use that rationalization; I really think I need my oranges! And when you think about it, I AM closer to some states than I am to some provinces within Canada.

All this to say that I'm not perfect and, truthfully, I don't aim to be. Our distribution system and, I admit, sense of entitlement do not make perfection a realistic target. But I try. I make conscious decisions

Things get complicated.  Consider, what has less environmental impact, what is more sustainable:
1) produce grown locally, in the "off" season, in a greenhouse, with the watering systems and fertilizers that need to go along with such an operation, or
2) produce grown further away, in the dirt, likely with less need for 'artificial' irrigation but will need to be transported.

Hmm. Also consider the respective sales agents for these two "products". One is likely a farmers market, the other a big-chain supermarket. And many countries depend on the export of certain products, including us.  Ugh. You can't win sometimes.

And because you can't win, I decided I would just always try to do the best I can. I love food and believe strongly in supporting local farmers for many reasons. I've accepted that these two are sometimes at odds with one another. I made the BEST pad thai a couple weeks ago. There is no way I could do that without tamarind, lime, fish sauce, or palm sugar. Not sure I could give that kind of thing up.

One step in the right direction has been to get regular produce deliveries from a local organic farmer, Bryson Farms. These guys have a great system down. They deliver to your door year round. I've been wanting to get on "the list" for over a year but they had some issues a little over a year ago. Since we were looking to buy a house I put off following up with it until we moved. I've been on a waiting list since July and last week we got our first delivery. Yesterday was our second delivery and I was so excited to get home to see what goodies we had.

garlic, squash, and full circle with kale beside the parsnips.

There is also a bag of mixed greens between the mini potatoes and pea shoots. 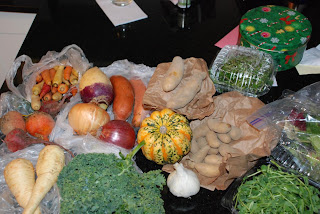 Yum! And we get to do it all again next week!
Hastily scribbled by RuckusButt at 9:34 PM

We're members of our local organic farm - which is about 200 yards from our front door, and get a box of wonderful produce every week from May through December - it's fun to learn about new vegetables and to work with the beautiful ingredients. I agree, it's important to think about these things.

Thank you for supporting local agriculture - an issue near and dear to Jason and to me.

Your pondering is very familiar to me! I choose to look at it the way you do as well, I just do the best I can. We try and buy from a local market, and we just got a share from a local organic farm where we get a bag of veggies every week. So yum!
Glad to hear there will still be some options for me possibly if I move to Canada.

It's so neat to hear other people doing this kind of thing! Another neat thing is they have an arrangement with some natural beef farmers so I will be able to get local beef too (Ok Kate, so that might not impress you much).

I love farmers markets and my husband and I are pretty sure we were meant to be farmers :) There is nothing like walking up to a favorite stand and having the farmer recognize you and exclaim, "Wait til you see what I've got for you!" as he digs around in a special box. So much fun!

What farmers market do you go to?
The selection of vegetables being delivered to your door is amazing.
What are you going to make with it all?
Jess

Hey Jess! We go to Parkdale market almost exclusively. Last winter we went to an indoor market a few times but now the produce comes to us!

Let's see...I did a mixed bean dish that I served on top of the kale. The kale was simply chopped and pan fried with onion and garlic. The mixed greens and most of the pea shoots/mustard micro greens went on salads or sandwiches. I'm saving the parsnips for Christmas dinner (there should be enough with tomorrow's batch). We are having the squash tonight but no definite plans for it yet.

Most of the stuff I am cooking quite simply to enjoy their goodness. In a few months when I'm sick of them I'll get creative!

What a lovely post and a feast for the eyes. I have a small allotment plot where I try to grow my own, and thoroughly love it.

sounds delicious. i agree that using the veggies as simply as possible is the best way. it's nice to actually tast the vegetable!
jess