If it Ain't Broke, Don't Fix it. Simply Adapt it.

I was expecting to be applying for a job tonight. Or at least that’s what I knew I should be doing. I re-read the essential requirements and it turns out I don’t quite qualify, woot woot! Ok, so it’s weird to be happy about that but I have so few nights off from riding that I wasn’t looking forward to spending it putting an application together.

Since I now have some time for myself, I thought I’d do a quick update post (or I will at least try to make it quick!).

I met up with Laura at Littlekeebler today and we caught up on our work and horse lives. We’ve been having some parallel realizations, I think, in terms of how we want to approach our horses and deal with certain behaviours. Just about everything she said struck a chord with me, so much that I couldn’t help but relate her experiences to my own. Hopefully it didn’t come across as rude, it’s just so interesting to have someone to relate to. I find most people don’t spend much time thinking, or maybe just talking, about these things.

With respect to the nudging – I have found that my approach to prevent it from happening in the first place is making a difference. I am always aware when I lead him and just as he starts to reach his head out to me, I correct him right then. Depending on timing, I do this by either giving a quick, firm tug on the lead away from me and to his outside (so the pressure is on my side of his halter) or I will tap his muzzle. Neither approach needs to be particularly harsh or dramatic to be effective; I interrupt the behaviour and we move on. I think this is effective because it corrects the actual behaviour while it’s happening.

Essentially I’ve gone back to the way I handled him before I realized he was moving me – that is firm but calm, not big and loud. I just began doubting myself but there was no reason to change my approach; all I had to do was incorporate my new realization into the mix. Instead, I felt like I needed other ideas but those led me astray for a couple weeks, I think.

I have also spoken to a couple of the barn staff. One night while a few of us were chatting, one woman described how “funny” he is about “nuzzling” while leading. I was able to tell her in a friendly, non-confrontational, way how he was likely not so cute in those moments but rather was moving us and exerting a form of dominance. It’s tough sometimes to tell any horse person how to handle your (or any) horse, so I was glad it went over well. I had already told one of the barn staff about this idea since her and I are good barn friends. This helped since she told the other employee all about leading him.

Well, since that conversation, I can tell he is being handled better by more of the barn staff.
In the last week, I’ve received positive comments from 4 different people about Willy’s behaviour. I take these as good signs that the consistent handling is generalizing to other people and that I’ve sorted out the remaining issues I was unsure of.

On a sad note, we are losing the *best* staff member, the one I consider a friend. She is heading to Florida for the winter with a dressage troop which will be fantastic experience for her. She is soooo young yet so responsible, thorough, and mature. She’s also a lot of fun to be around. Good barn staff like her are very hard to find, I’ve learned. It’ll be a long winter around the barn without her!

I was looking for a photo I could post and came across the three photos from the Per Meisner clinic I participated in back in October. Per is back this week (I'm not riding), so I figured I'd post a couple now. The only other one is blurry and bad, so this is it!

Will and I schooling in a clinic with Per Meisner. 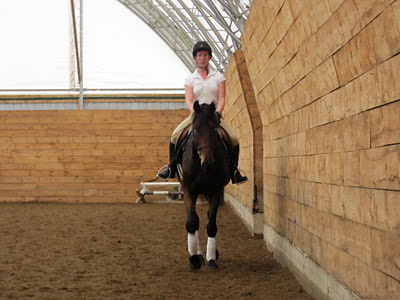 Willy is smart - taking a minute to scratch while we listen to Per.
Apparently my posture was taking a break too! 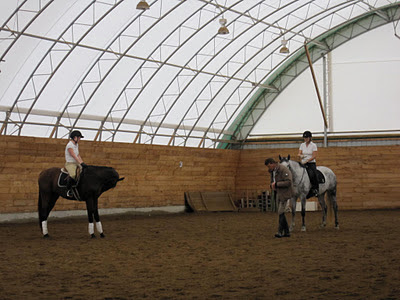 Hastily scribbled by RuckusButt at 10:18 PM

Not rude at all! It is so nice to have someone to talk about this stuff with who doesn't think I'm crazy! :-) Interesting that we are having similar issues... This sentence that you wrote really struck a chord: “I just began doubting myself but there was no reason to change my approach; all I had to do was incorporate my new realization into the mix. Instead, I felt like I needed other ideas but those led me astray for a couple weeks, I think.”

I feel like I led myself astray for the past 2 months! I just hope I can undo the damage I’ve caused with Dolly... I’m still working on my post and trying to sort out feelings and words. Although the situation isn’t great, I feel like I’ve grown or progressed in my horse knowledge in some way. Whether I can get over my nerves enough to ride a more sensitive horse or not remains to be seen, but I at least feel that I know how to try – if that makes any sense!

Good that the barn staff are noticing the improvements in leading Willy – sometimes it surprises me that “horse people” don’t always catch on to that stuff. Too bad you are losing the one responsible person, it seems that those types are few and far between!

Oh – are you going to tell us more about the Per Meisner clinic??? 

I tend to think most horses are pretty forgiving and, barring major trauma, are happy to work in the moment. I bet if you are different she will respond in turn (and tell you if she approves!).

Re: clinic. I can but...the post kind of got away from me (as in, I didn't start it!) and then so much time passed...and now I've shared the only 2 semi-decent photos...I will work it in somewhere :)