Coming up for air…

As promised, work has been rather insane this month. I’ve worked 18 out of the last 20 days and many of those days were 12-16 hour days. This included work travel which was almost 24/7 work for 5 days. I can honestly say I haven’t worked that long/hard since grad school. Dislike!

This was the bed I had to sleep in on my work trip last week.
The food wasn’t much better. 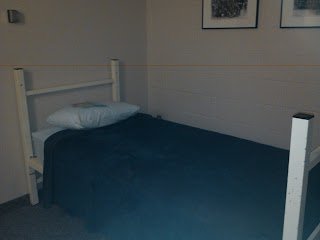 On a positive note, I have 3 days off before starting the next stretch of almost no time off. I started last night by catching up on some email. I’ve dropped the ball on a couple things but I’m trying to pick them up again. I’m not used to making mistakes, so it’s been a hard go in that respect.

The issues I’ve had with Willy and his bit sensitivity/mouth issues have, unfortunately, not been resolved. I’ve tried just about everything with limited success. I have thought for a while now that there is something else going on and his owners agree. The question is, what? At first we were reluctant to have the vet out again since there wasn’t anything obvious or acute to report. I did manage to catch my vet while he was out for someone else and fit in a couple words about Willy (somewhat of a no-no, but I did it anyway). I said he was displaying new, worse behaviour (the head tossing, etc) and planned to try bitless for a couple weeks. He thought that was a good idea. But it has been several weeks with no change (without and with bits) so a vet will be out to see him Sunday.

Right before I left for my trip last week, I noticed a lump on his cheek/jowl area a little smaller than a golf ball. It seems superficial but was not there the day before, so I was very worried to be going away. I returned to a horse that ignored and even walked away from me when I went to get him. Will never does this. He always watches me, even if he doesn’t come to me, and he never walks away. He was also missing both hind shoes and was covered in sweat head-to-toe with just a rainsheet. The temperature was an uncharacteristic 15-16 degrees, so it was understandable, but I still felt like a horrible horse mom.

The next day, I was told that after I left Willy stood in his turnout pawing the air, often with his head cocked to the side, for about 3 hours. The owner went out to check on him a couple times and he stopped while she was there. Nothing seemed amiss and he wasn’t even digging! He would start up again soon after she left.

The riding has remained pretty much the same – not normal with his head/mouth but he seems to be trying. He doesn’t really head-toss under saddle anymore but he will do it on the crossties, in his stall, and in turnout. His temperature has been normal and he is eating well and playing like normal.

I will not divulge my secrets! 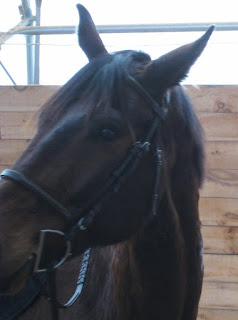 Today he had his feet trimmed and reset. I wasn’t there until a bit later and was told upon arrival that both his cheeks are now swollen. So it seems that the swelling isn’t directly related to that lump on his right cheek (which is still there and possibly bigger than a couple days ago). I couldn’t bear to ride – I just felt too guilty even thinking about it. So I free lunged instead. Although neither of us have ever done it, he was brilliant. He mostly acted like he was on a lunge line and responded well to my verbal and body cues. Good boy!

All I can say is that I really, really hope the vet can find some answers for me.
Hastily scribbled by RuckusButt at 10:08 PM