My vet check on the grey was yesterday. All started well enough with the physical exam, things looked fantastic, actually. Then we went outside to watch him go, do flexions, etc. We started in the round pen and he was quite obviously off on his right front. It was subtle and likely only evident on a circle, but it was consistent.

I'm not a superstitious person but I'm begining to feel jinxed. I finally find a horse where every little detail fits perfectly with what I want and he presents with a lameness at vet check! I know, I know, better that it happens now, yada yada. While I know that to be true, it doesn't make it any easier. 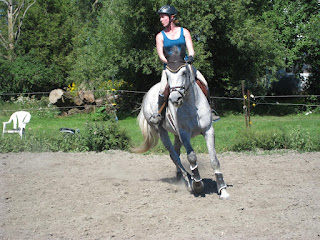 I decided not to proceed any further that day. As my vet pointed out in private, it's not up to me to diagnose a lameness if one shows up, that's the owner's job. Also, even if I did do the flexions and xrays, it's possible nothing would show up and we'd be in the same position, or the discomfort in that leg could mask if there are issues in any others. Ugh.

So I will go back to the farm and watch him again on Sunday. If he shows absolute soundness, I have the vet lined up to re-assess and continue on Tuesday. Obviously if he is still off I will cancel the vet call and have some poutine and beer. And then some candy. Probably all while crying. My gosh that's an attractive image, isn't it?

I shouldn't feel as hurt and upset as I am, it's just not rational!  I seem to fall in love too quickly with a good match. I have to say that even though it hurts, I'd still rather love hard and hurt than be more indifferent. It's just not me.

My biggest concern is is this:

Let's say he looks to be perfectly sound on Sunday. Then I have the vet out and everything goes fine, xrays are good etc. So if I had happened to do the vetting that day, I would have never known about the day when he was slightly off. What then? Do I assume he is fine and go ahead with the purchase? I worry about soft tissue stuff because it can come and go...and come back again. I've dealt with this with Hazel most of her life. I know it's not in his hoof because he was amazing through the hoof testers and my vet was very thorough. He was also fine the two previous occasions I've seen him, which were a couple weeks apart themselves.

I have no idea what I'll do. This horse is so perfect for me in every way, it feels silly to write him off for being ever so slightly off one day. But then again, why take the chance. I just don't know what the right thing to do is. I guess I will take it one day at a time.


I want to kiss that nose for years and years to come.
Is that such an impossible thing to want? 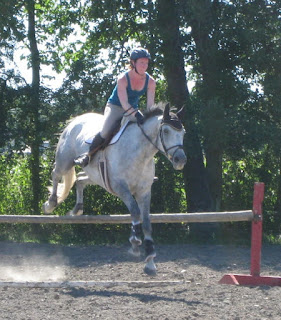 Hastily scribbled by RuckusButt at 8:53 PM

that is a total bummer... :-( I don't know what I'd do either. I don't even have any good advice or suggestions. I'm sorry you are going through this - I had really hoped this would all work out for you.

I would be following your plan. Watch the horse in a few days and if all looks good another prepurchase. I've seen horses bang their leg in the field and be off for a day or two and then just fine. Not every lameness is THE lameness if you know what I mean.

I also agree with the vet 100% - it is not your job to diagnose lameness - it is the owner's job.

Well, that's somewhat encouraging since I thought the only feedback would be "run".

My coach is thinking I should let him go but then she wasn't present for the vet check and didn't see how subtle it was. Well, it was slight but we all saw it.

We will see what tomorrow brings!