That's right, I found my horse!  I was prepared for the pre-purchase exam to yeild a deal-breaker since it's happened twice before, but everything in my mind was quiet and calm leading up to the day.

That day was last Wednesday.

My previous experiences prepared me for the worst. This time, I was able to think about the rest of the things that can come up in a pre-purchase and I didn't have to worry about plain old presenting lameness. Good thing about this process taking so long is that when we did get into some of the finer details, I was fairly educated in determing what I was and was not comfortable with.

In a fairly quick whirlwind of organizing, I brought him home Saturday!


Meet Armani!
Hmm, I was going to mention at some point
that Armani toes-in a little - it appears I toe-in a LOT! 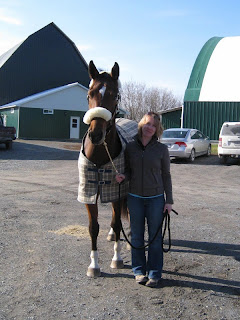 Armani is a 3 year old registered Canadian Sport Horse. His sire is Apiro, a Bulgarian Warmblood with lots of Hanoverian and Westphalian in his pedigree. His dam is by Popeye K, a Dutch WB (KWPN approved) with Hanoverian, Dutch WB & Holsteiner in his pedigree. He is younger than I was aiming for but I'm okay with taking things nice and easy. He was started under saddle in August and did a few shows in the hack division, in the ribbons every time and winning the show hack. He actually ended up 7th overall in the hack division with only four shows.

He loaded great and trailered the short 30 minutes to my barn. Yeah, that's right, I put halter fuzzies on for a short trailer ride that wasn't to a show.  I'm living my dream so I figured if I wanted fuzzies, I would have fuzzies, no matter how silly. The really silly part is that the halter I bought for him is padded leather with a raised, also padded, noseband. You know how hard it was to get fuzzies on an already padded leather halter? I gave the task over to my incredibly patient husband.

Armani settled in well with his new herd. I was expecting some drama but they were fairly boring. Perfect! He seems to be a middle-of-the-herd horse so he stands up for himself and therefore doesn't get bullied badly but also doesn't challenge leadership, either.


I was a little worried about the introductions! 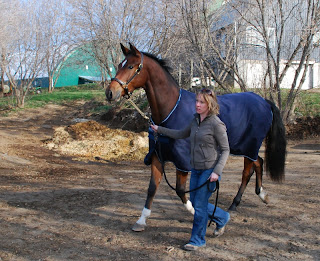 He is still a little unsure of himself around the farm but is taking in all the new stuff well. I'm taking it pretty slow but did do a sight-seeing tour under saddle on Sunday and he was super going through all the fields, the galloping track, and the front jump and dressage rings. It was almost all at the walk, with a tiny bit of trot, just to let the tension out.

On Monday night, I handwalked him in the arena so he could check it out before being tacked up. To me, once he's tacked up it's work time, so I wanted him to be able to explore without any mixed-messages. He is every bit the baby he is when it comes to ground work. It just doesn't occur to him that he can't just walk off whenever he wants. He isn't rude though, just clueless and a bit impatient.

Well, that's all of an intro I can manage! Hopefully things will settle into a routine of sorts soon. 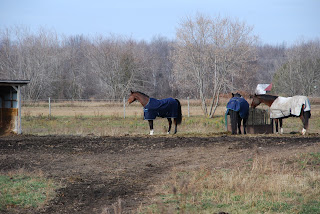 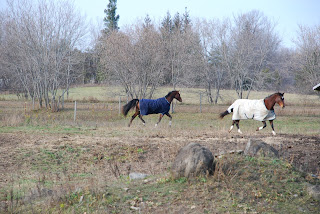 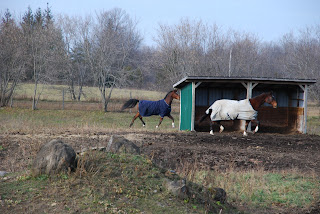 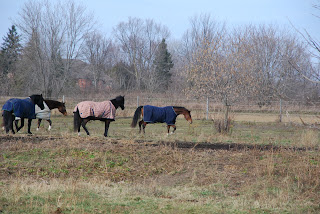 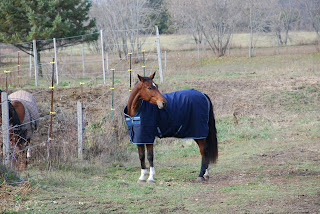 Congratulations! He looks just plain beautiful! And a happy Thanksgiving to you and yours.

Congrats! He is sooo handsome. I love his head and eyes. And he is a lovely bay - can't beat that!

Can't wait to come and meet him and see some pics of you guys working under saddle.

Thank you Kate! He really is gorgeous - I just stare at him and can't believe he's mine :-) At the same time it feels incredibly normal, like this is how it's supposed to be!

Laura - funny how I ended up with a bay...it was inevitable, I think!

I'm not sure when or how frequently I'll be able to get under saddle pics but Alex keeps referring to Armani as his horse, so maybe he will want to come along sometimes and make sure I’m not hurting his investment ;-)