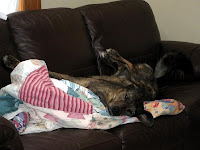 It was another really hard day around here ;)

Hazel was clearly feeling the stress. 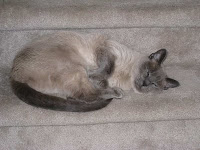 Tonka also needed a "time out". He is our chameleon kitty, it's weird how well he matches the carpet, isn't it? We used to have taupe walls in one apartment and when the light was right, Tonka looked identical.

Now, it's been way too long since I've done a food post! Tonight's dinner was Roasted duck served with plum sauce and green beans (aka haricots vert). 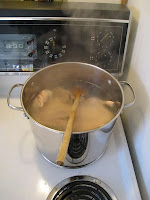 First, to eliminate some of the fat from the duck, I boiled it for about 15-20 minutes. You can do it longer if you like. This also helps shorten the roasting time. Of course, ducks float, so it's useful to weigh it down with something!

We prepared root vegetables (carrots, turnips & onions) and put the duck on top. Inside the duck cavity, I placed many garlic cloves and several wedges of lemon. It was then roasted at 350F for about 1 hour. It could have roasted longer. 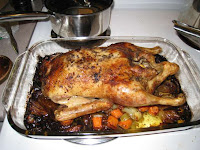 Unfortunately, it was too much for the vegetables and they were not very good. It is rare that I mess up so badly that it's inedible. Oh well! Next time I would add them to the roasting pan about 30 minutes before the end of cooking time.

The duck itself was very delicious. 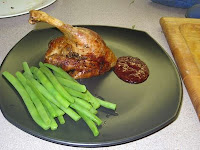 I then warmed up some homemade plum jam and added a small amount of Chinese 5 spice and a splash or two of apple cider vinegar. This was served on the side.

Paired with simple steamed green beans, it was a very nice meal!
Hastily scribbled by RuckusButt at 6:25 PM

Oh, RuckusButt - I understand it was hard not to keep Mattie!
It must be a really tough job to be a foster "parent".
I would probably get too attached and keep too many - and as you say, that is not the task if you are to be a foster home.
You (and other foster homes) are doing a marvellous job, cudos to you!

The duck look delicious.
Duck is one of our favourites.
The spiced up plum jam sounds really good, I'll try that next time!

Thanks horseofcourse. I knew it would be hard, but this one was especially so. Mattie was so adoptable, she really deserved her own family. It also helps knowing how carefully our shelter chooses new families!

I know myself enough to realize it will always be hard but I'm hoping it will get a little easier with time. The humane society is smart, they wait just long enough between fosters that you forget a little of the pain!