Meal Fit for a Queen.

Well, not quite the Queen, but I had the pleasure of having my mom stay over Friday night, so close enough. The plan was that my mom would come over in the early afternoon (I took the day off).  We would do some gardening, since I've really been wishing for some company to combat the creepy-crawlies (more on this in another post!). Then we would have an early dinner and go to my riding lesson. It would have been the first time my mom has seen me ride, outside of photos and video, since I was a kid. I was pretty excited about it!

Of course, weather did not cooperate and it was still hot & humid as hell. So, my lesson was rescheduled for Sunday. Therefore, instead of showing off my riding for my mom, I figured I'd show off my cooking :)  We took Hazel for a swim and then I got to work. 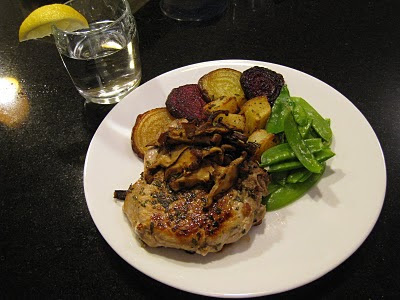 We picked up a couple of bone-in pork chops and went from there. I decided that everything would have a herb theme since I have many readily available in the garden. I chose a mix of rosemary, thyme, and some mystery herb that came with my produce delivery.

Pork Chops
These were simply lightly oiled and rubbed with the herbs and pepper. A gave them a sprinkle of kosher salt just before pan frying. I would have grilled them but it was raining at the time.

Shitake Mushrooms
These were to garnish the top of the pork chops. I removed the stems and sliced the mushrooms and finely chopped some red onion. I don't know why I didn't add garlic, I think I had too much going on! The mushrooms & onions were sauted in a bit of butter and olive oil. I will salt lightly once they get some colour, if you salt mushrooms too early they lose some of their "meatiness" or firmness. Shitakes are fairly dry, so I like to add a liquid towards the end, they absorb it and it helps deglaze the pan. First, I sprinkled in some of the herb mixture and let that heat enough to release the herb-y goodness. Then, I added a splash of sherry. You could use white wine or a herb-flavoured vinegar.  Once that was reduced, I removed it from heat.

Beets - Just before I dinner, I harvested a couple nice beets from the garden. A very exciting moment for me!  I sliced these in big "coins" tossed with olive oil and herbs. They were roasted in the oven.

Potatoes - also tossed with olive oil and herbs and roasted in the oven.

Snow Peas - steamed on the stove top. I wait until the pork is done and set to rest, then throw them in a small pot of boiling water (have the water ready) for 2 minutes.

It was SO good to have someone to cook for. We were stuffed!
Hastily scribbled by RuckusButt at 10:10 PM

God that food looks good. I'm licking my chops all the way down here in Tennessee !