I'm sure you all agree, there is just about nothing worse than a sick pet. Unfortunately, that's exactly what I have on my hands. Hazel has pretty bad diarrhea and I was up on and off all night last night with her.

I have 2 theories as to what's going on. One is food related. Without going into a lot of history, Hazel has a tendency to being sensitive to some foods. I've found a lot of the higher-end dog foods are too rich for her...blueberries, apples, and salmon, oh my! This goes back to when she was a puppy. But I've suspected lately that some of the wet food isn't working for her.

What I think is more likely, given the severity of the situation, is that it is something she ate last night. You see, I have this neighbour.  I've seen this woman regularly for several years while walking Hazel. She has two Golden Retrievers. It took her two years to remember our names and sometimes still asks. When we moved into our house, we soon discovered she lived one street over. This woman is very nice, although eccentric.

I often walk Hazel at night by myself, especially on weekends. A few times, I've run into this neighbour and taken the walk with her. It always ends up WAY longer than I wanted or needed but she really seems to need the company. I've been invited to her cottage several times :)

Last night, I was walking Hazel pretty late since I had been at the barn and had today off. Hazel had been at daycare all day and really only needed a walk around the block to relieve herself. I ran into this neighbour and we started to talk. I had NO intention of going on her crazy walk with her. Somehow, I couldn't just continue. She clearly needs some company and, quite frankly, so did I. But I didn't need over an hour! I went with her to a park nearby to wait for her dogs to do their business. One of them never did, which meant we walked for a long time!

Since it was late and her dogs were off-leash, I let Hazel go. I don't worry about her, she is very well trained and really never wants to get too far from me. She also doesn't eat stuff when out for walks. It's just never been an issue, she seems to know I have to give it to her.

However, I think she ate something last night. I was distracted by eccentric neighbour obsessing over beer bottles in the park. Ok, seriously, I admire anyone who picks up other people's trash, I've done it myself several times. And if you can make a couple dollars by doing so, great! When it gets to the point of worrying about whether someone else will take 6 bottles before you come back with a big enough bag, well, that's a little strange to me. It's not like that dollar (if that) is really needed, trust me.

But I digress. While we were stashing beer bottles, Hazel wandered onto a playground where I think she got into something yummy. I suspect this because I had to call her twice and she just seemed like she had been eating something.

I got home from this epic walk after midnight and had a glass of wine to unwind. This was harsh since I had to get up early to watch my 4 year old neice in her first horse show. I'm used to not getting enough sleep, so I wasn't too worried. I woke up at about 2:30am to pee - I drink a lot of Gatorade/water while at the barn and I had 1 beer after the barn and that glass of wine. As I sat up I realized Hazel was sitting beside the bed, staring at me. Uh-oh.

My wonderful, stupidly stoic, dog will not make any noise or indication when she wants to go out. Not even when she needs to go out. So I knew this silent presence by my bed meant something wasn't right. "Hazel, do you want outside?" I asked. She shot to the back door, panting. Poor girl. We repeated this the rest of the night. I was too worried to sleep, so every time she shuffled in discomfort, I got up to let her out. She was so uncomfortable that she would pace and pace before being able to do anything. I gave her space but after each "episode" I was out with a flashlight to make sure nothing critical was going on.


Come morning, I took Hazel for a walk with much the same result. I didn't feed her for several reasons. In situations like this, I usually like to give her system time to relax without trying to digest anything. I like to do 24 hrs, if possible, but usually give in after 12 or so. Also, I had to be away for several hours in the morning and it wasn't going to help if I added load to her system without being there to let her out. I know her enough to know she won't "go" in the house, though I wish she would when she is that desperate. I also wanted to make her some very bland food to help her out and help determine if I was dealing with something more serious.


I was away at the show for 3 hours and then I knew I had to get home. I stopped to get rice because my dear husband bought brown rice when I asked him to pick up some emergency stock for Hazel. I don't think brown rice is the best because it is harder to digest and the higher fibre can complicate things. It was more difficult to find a store open since today is Canada Day.  Hazel was in quite a rush to get out to do her thing when I got there. I observed her stretching down in front and passing gel-like stools. Talk about guilt! I felt so bad for leaving Hazel and also for leaving the show. Can't win.


I made up some ground meat and rice for her. I like a ration of 1/3 meat to 2/3 rice to start. After 2 days I will either start adding in some of her food or a bit more meat, depending on how she is. It had been about 16 hours since her last meal and she was begging for food, so I started with a very small portion. Then we both had a nap!


On our walk later I could tell she wasn't quite herself but she was still inquisitive, though slightly less energetic than I would have expected for such a cool, breezy day. I've been checking her hydration as best I can. I don't have much faith in the skin tent method, I believe they have to be very dehydrated before you will see anything with this approach. I also check gums and monitor drinking behaviour. I want to see her drinking regularly, perhaps a bit more than normal, but not excessively. Excessive drinking would mean we were heading to the vet.

The next real problem was that it is Canada Day and it seems that every park nearby has small fireworks. Hazel hates loud noises and was shaking most of the night. It's the last thing a dog with digestive upset needs! I turned up the TV, sang and did silly light-hearted stuff but I didn't fool her much. I want to look into calming herbs, or even drugs, in the future. I might not use them, but I definitely want to see if there is something that could help that I'm ok with.

I was able to take her for a relaxing walk eventually and now she is sleeping and seems relaxed. I'm very glad that I started her heartworm late this year, otherwise I'd have to stress her system with dewormer on top of everything. As it is, I get to wait a couple days before giving it to her. Hopefully her gut will have settled by then.


I want my happy, healthy hound back!

What's up Mum? Why ya worried? 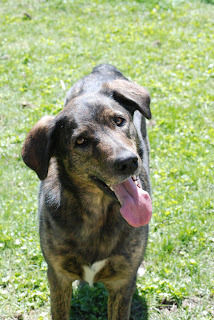 Hastily scribbled by RuckusButt at 12:43 AM