I've been riding Willie all over the place. The vet instructed us to work in straight lines, work often, and not to do arena work for as long as possible, so that's what we've done. For the first while, it was pretty easy going. I could point him anywhere and he would go without a second thought, it seemed. Yes, there were times when his head would come up and he'd look intently at something in the distance. And especially spook-worthy things would elicit more of a reaction, like a leap sideways, but overall I was very impressed with him. So I'd say he can be a rather sensitive horse and although I wouldn't describe him as overly spooky, he is definitely "looky" and fairly reactive.

In the beginning, I always let him look until I felt him relax, then I would ask for forward. I worried a little that I needed to make him work through these moments but it felt important to me that I learn when he needed that minute and when I should push him on. I think I've got that now. Sometimes he just needs to look and I can't help but feel it's better if he works out for himself that everything is ok, rather than forcing him in all situations.

We'd had weeks of field and trail rides under our belt when things started to change. It got cooler, the fields were harvested or turned golden, the tree lines were no longer solid walls but had spook-worthy gaps appearing between the leaves. These gaps leave just enough space to see that there is something beyond but not what that something might be. Definitely cause for giraffe neck and wonder leaps.

Aside from learning how to stick with a horse that is leaner, faster, and more agile than Brumby (though thankfully he's less powerful at this stage), I've learned a few things about Willie's personality. One of the most interesting to me is his apparent sense of curiosity.

For example, when he stops to look hard at something he's not sure about, he will stare for awhile and then offer to approach the object. Sometimes I feel him relax and so give a squeeze with my legs and that sends him off, but there is no real direction from me. Other times, he starts forward without any encouragement. If the subject of his interest is within reasonable distance, he approaches more often than not.


One time, there was some kind of furry creature in the trees that neither of us saw until we rounded the corner of the field at a canter. That was the biggest spook I'd ever experienced with him - all he did was take a huge leap sideways and give a little buck but it was super fast. In fact, I was left behind as he leap sideways. I landed on my feet, as if the horse disappeared from under me! I got back on and continued our ride, though I didn't force him back into that corner we did work a little ways from it. The very next ride, as we approached that area, he clearly "asked" to go toward that corner. I let him and after brief investigation he moved on.

This kind of behaviour is typical of WIllie - he always wants to investigate the scary stuff.  I think maybe "George" should be in the running for Willie's new barn name. He is such a curious boy, it would be fitting.

Yesterday was a particularly good example. 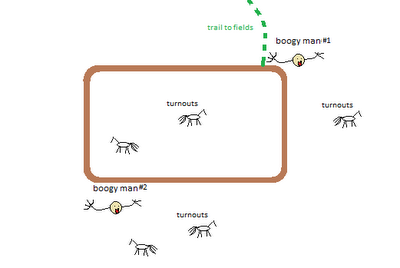 Well, Willie's is fine with the boogey man #1 area and usually asks to go up to the fields (Aside: I love this about him. He often lets me know he prefers to go a certain way. Sometimes I make him conform to my agenda and then let him explore where he wanted and other times I just let him take me to the fields/trails. I don't mind fostering his desire to go off the beaten path. I love it!). Anyway, boogey man #2 is much more frightening. Most horses think so, to varying degrees.

There is a path in that back corner that goes through tall grass and sparse trees with the track on one side for awhile and fields on the other. It can be hard to see and I only learned of it this year, having not been able to hack Brumby all that much. Willie and I explored that trail some while hacking with others but we always came from the fields to the trail and then the track, never the other way. 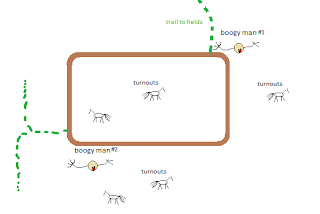 We headed down the track. 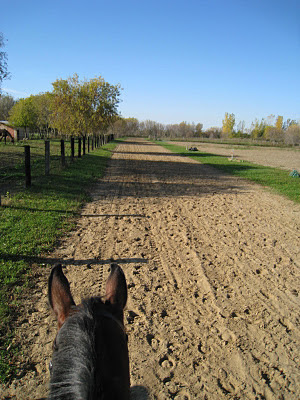 Said "hi" to the mare Mini.
Willie quite likes Mini, I suspect it's
their similar lack of a round butt. 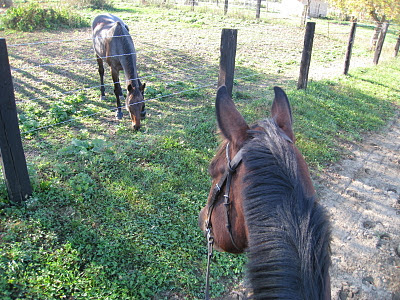 Then we come to Panda, a fine Canadian horse.
I'm not sure why Willie has donkey ears -
probably not used to me fiddling with a camera during a ride! 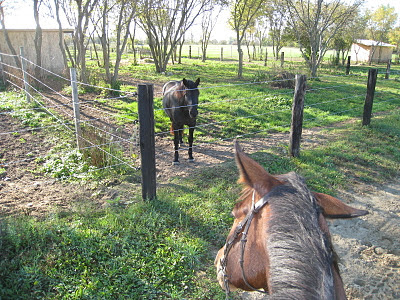 When we got to the path off the track, he clearly asked to go that way. This was new and since this is a scary corner I figured the more he explored the better. 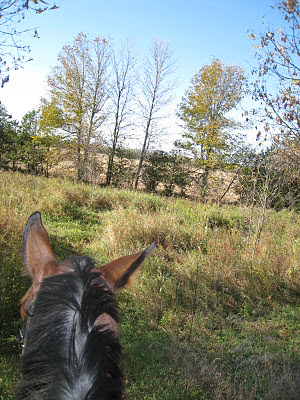 So we went. He actually even asked to go in a direction I had never been with him before (perhaps my coach has? If she has, it would have been months ago, at least). 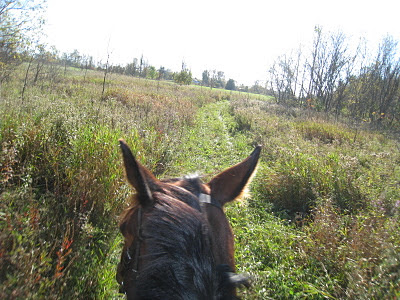 We rode a loop back towards the start of the track and then met up with another rider and headed down the same path in the other direction.

This was an "accident" picture but I think it's funny
because it looks like Willie is only 2 or 3 fists wide.
I assure you this isn't the case ;-) 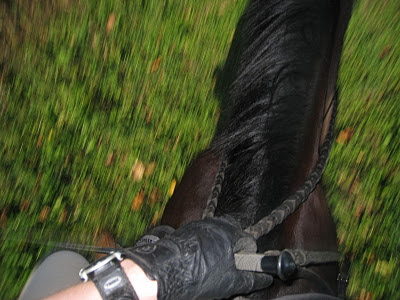 I'm afraid I'm in love with my curious little monkey.
Hastily scribbled by RuckusButt at 10:18 PM

Fun pictures. I'm glad things are going so well. I like the accidental picture too.

One day I'm going to get you to send me one of your diagrams which I will frame and hang on the wall because I think they are awesome ! :)

Glad the rides are going well and that you're liking/loving your new ride.

Jason, you should see the one I did back when you solicited ideas for your second hay shed/barn. I don't know why I never posted it...I have it around here somewhere - stay tuned ;)

Thanks Once Upon, it's been great in so many ways, even though his stifles aren't "fixed" yet.