This post is to catch up on the last few months of my horse life without feeling obligated to discuss every detail. I am hoping this will get me back on track so that I can get into the deeper topics I want without being stifled by so much time passing (pun intended). It's not that I won't cover issues from that period of time but rather the posts will be centered around the topic rather than strictly chronological, which I think will be much more interesting, at least until I catch up fully.

SO! I've been riding a TON. I really took the vet's recommendation seriously and have been doing my best to work Willie (who I've been calling Bear - still working on a new barn name) 6 days a week. My initial plan was 3 days on, one day off. While I managed this for a brief time, I soon learned that I wouldn't be successful with that kind of rigidity. Of course, being there for my family certainly changed things, but it wasn't sustainable regardless. It didn't mean that I couldn't ride just as frequently overall, but I did realize that I had to allow for some variation in the schedule.


My main goals are to ride as much as possible and to try not to give more than one day in a row off completely. Of course I also vary the intensity and type of ride, depending on previous rides, anticipated next rides, days off etc. I have been very fortunate to have had great weather (up until tonight) that has allowed me to work outside.

Willie's stifles have been great. They would occasionally lock up again until about 2 weeks ago but it was more like sticking than locking and would only happen before warm-up. His shape is changing a lot too and he's looking better and better all the time. Of course, he's feeling better too which can be...interesting ;-) Especially with the cooler weather!

Overall he's been such a good boy and I'm having more fun than I ever have before with any other horse. Yes, I sometimes miss the level I was riding at with Brumby but I don't for a second regret the decision. This has been an entirely different experience and process for me and I'm enjoying the journey so much.


Here are a couple pictures from August.
It was a day off riding but I took Willie for
a long walk with Hazel. 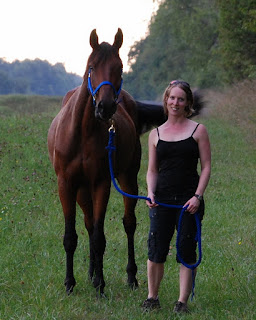 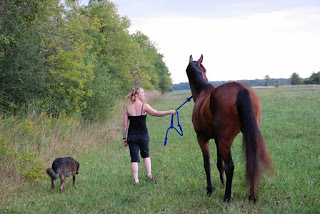 Hastily scribbled by RuckusButt at 10:46 PM

I just had to say that I love both of those pictures!

Thanks Melissa! I have to say they make me smile every time I look at them.