How to Carve a 30lb Frozen Turkey. 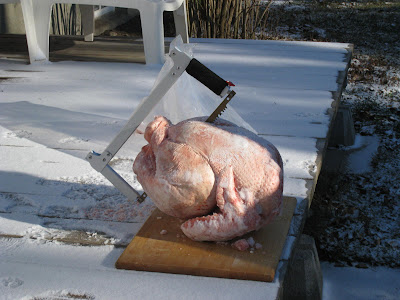 We missed out on our local chickens this year as the farmer had sold out by the time I got around to ordering. So I decided to get a couple extra turkeys. They mentioned having a lot of really big ones - 30lbs or more, so I said sure, throw one of those in.

One of the suggestions from the farmer was to bring it to a butcher and ask them to saw it in half or quarters, if I just wanted a chicken-sized quantity of food at one time. We thought we'd just try cooking that one for Christmas dinner instead of the more reasonably sized 18-pounder I had originally planned on.

Well, not only would the big bird not fit in my Calphalon roaster, it barely fit in my oven! It would have been much too close to the elements to cook properly, even with convection. I was starting to consider which butcher to try bribing first.

Then this morning, Alex asked me to get the saw in the garage next to the back door. He was doing dishes at the time, so it was an odd request, but I felt sure it was going to be Alex vs.Turkey day. What I didn't say out loud was that my bets were on the turkey!


As you can see, I was gladly mistaken. 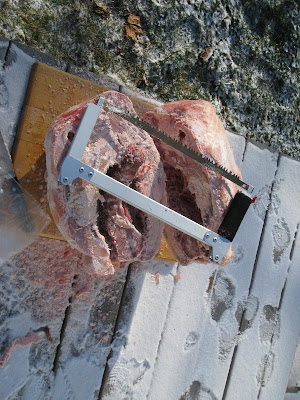 It didn't take all that long and only involved me for a few minutes to help stabilize the bird. It's not pretty and it won't be the bird for Christmas dinner but it's practical.  I still don't know exactly how we will roast that up when the time comes, but at least now it's a possibility!

Of course, saws create sawdust. In this case, turkey sawdust which resembled turkey-granita. We cleaned up most of it but Hazel enjoyed the bits of icy treat left behind. We are hoping we don't have racoons fighting in the yard tonight!

Lastly, how do you spoil your cat who is frustrated with the cold weather? 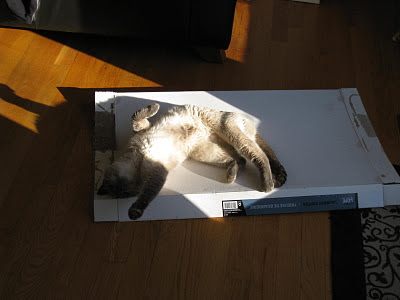 Hastily scribbled by RuckusButt at 5:35 PM

There is a picture of me sawing up a 10 lb lump of frozen hamburger in our college yearbook so I think the whole idea is simply awesome ! Made me laugh out loud and remember some pretty good times !