I had the pleasure of going on a hack outside on Tuesday. It was perfect - there was finally enough snow to provide a bit of a cushion from the frozen ground and since I had the day off, I was able to get out while there was daylight. On top of that, I had arranged a hack date the day before, so everything was perfectly in place. 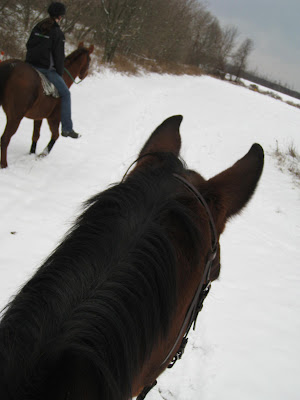 It was right around 0°C, so it was also a perfect temperature. I didn't start getting cold until almost an hour had passed which is pretty impressive given that the ride was all at the walk.

Despite being at the walk, I think it was a great ride as it wasn't in an indoor and the deep-ish snow plus uneven terrain was great to get Will picking up his feet and therefore exercising those stifles.

Me trying to make funny noises to get Will's ears up. 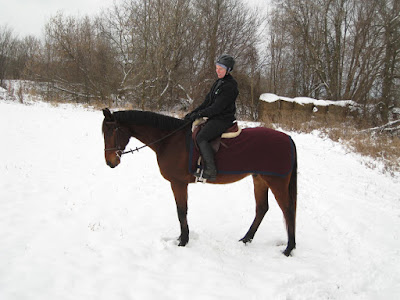 I appreciate the ride that much more since the temperature plummeted yesterday and we are currently hovering around -20°C. Hard to imagine we are supposed to be back in the positive by Saturday. This year just can't get itself straight.

Now, for your dose of cuteness. The following pics are our two new-ish barn kittens. They are now big enough to start venturing out more and more...which means they are getting in more and more trouble! One night I was grooming when Willy scooted ahead suddenly. I saw the grey tabby scrambling up his back from the opposite side. Kitty got bucked off :-/ (Willy was a pretty good boy though - he bucked a couple times on the cross-ties but didn't pull on the ties and he settled down quickly after).

Ok, so we are fostering potentially bad habits here. ;-) 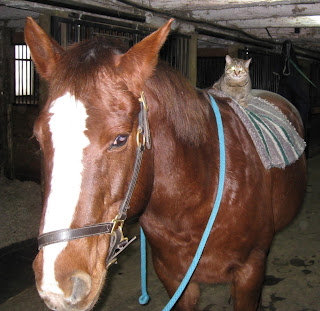 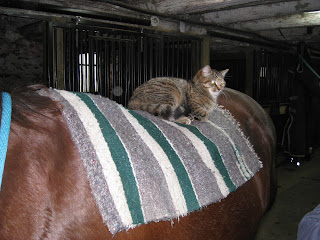 This girl was born to be a horsie back-warmer! 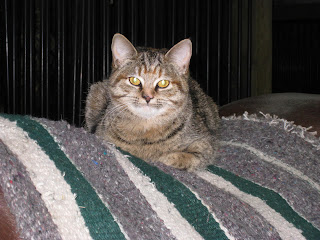 A much safer option for a warm place to sleep. 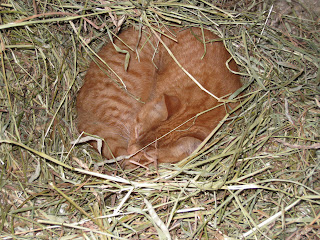 Hastily scribbled by RuckusButt at 1:02 AM

How nice that you got out for a ride in the snow. The barn cats are adorable.

They are full of beans, that's for sure!

In case it's not clear from the post - the horse pictured with kitty on board is not Willy! It's a mature, very calm mare.

The barn kitties are just adorable and the ride sounded like a lot of fun. Even I think riding in the snow is fun (about once every 5 years or so!).

It's nice to get to ride outside in the winter, even if just for a walk!

Awww! The kitty cuteness was great!

Good for you getting out in the snow to ride. I should do that, too, but I'm such a col weather riding wimp.