This is a gross post. Just warning you up front!

Armani's abscess has continued to look like it's on the verg of opening up more every day...but stubbornly has yet to do so. Friday it started oozing that liquidy yellow translucent puss and I was excited that the big moment would happen this weekend. This reaction is normal, right??

Well, it's still holding it's ground. The worst part is last night Armani decided he has had enough of my compresses. I tried a bunch of tricks (since I've been doing this every day for 2 weeks, I've developed a few) but he was FED UP.

There is no worse feeling than not being able to help your horse.

The only good thing is Armani has stayed otherwise completely normal. As my vet assured me, "you don't have a sick horse." Well, no, he's not sick but not exactly well, either. As our 2-month anniversary passed this week, I had to feel a little sorry for both of us to be dealing with this.

Tonight it looks even more disgusting and is dripping. At this point, I would be satisfied with just cleaning it up, let alone actually doing the warm compress like I'm supposed to. My horse had other ideas.


Prior to cleaning. Nice eh? 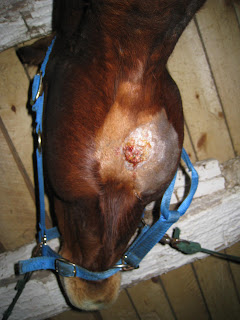 I was standing there in the stall trying to decide what to do, since it feels horrible to give up but I also didn't want to die trying, lol. Mani came and stood next to me. After a few minutes of petting him, I realized he was staring out the bars of his stall. Just outside, I had his empty grain pail and the pail with warm water and facecloth.

Somewhat absent mindedly, I grabbed his grain bucket and the cloth. I let him lick the grain pail and gently put the cloth on the area with my other hand. Success! He let me rest it there. So the new trick is to hold his feed bucket rather than dumping it in his stall feeder. Of course, since the bucket was empty it didn't last long but it did help me get some of the dried gunk off. Since he only gets a tiny amount of ration balancer, I decided to prepare another cup in hopes of cleaning it better. Since I have his grain dampened, it puffs up and takes longer to eat which helps buy me some time.

It worked and I got it cleaned up quite well. Hopefully that will help the drainage continue! Now we prepare for a deep freeze (around -25C/-13F) and I feel so, so bad since the area was shaved for the ultra-sound and even if it wasn't, that can't feel great in the cold. My poor guy!
Hastily scribbled by RuckusButt at 11:35 PM

It's good that it's draining. Any possibility it's related to a lower jaw tooth abscess on that side? Hope it resolves well and quickly. That he's feeling fine is a very good sign.

Yes, all good things are happening, as strange as that is to say given what it looks like.

It does not appear to be related to anything. He has been very thoroughly checked (3x in the last 2 weeks), including his mouth/teeth. The best we can figure is he never completely cleared the cold that a few horses had a little over a month ago and he walled off whatever infection was hanging around.

just found you guys! will look forward to seeing how your adventures go!