What I did this weekend 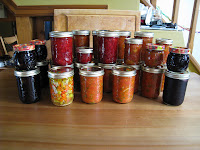 Friday after work, hubby and I went to the farmer's market and picked up tomatoes, blueberries, strawberries, and chili peppers. We made a batch of blueberry jam, two batches of strawberry jam, and chipotle salsa. We had a lot of fun! Saturday morning, we were back at the market for red peppers, potatoes, carrots, and beets. Then we needed to go back to Canadian Tire for more jars :) We made another batch of salsa (tomato-peach), tomato sauce and pickled hot peppers. I swear we were meant to be farmers, it was so satisfying to watch the jars pile up! 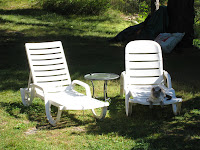 After all that hot work, we took off to the cottage. This picture of the cat pretty much sums up the nice relaxing time we had. My only regret is that we couldn't stay another night, we were due at the farm early Monday. We drove back to town Sunday late afternoon and had a nice dinner at my Mom's.

Monday, labour day, was full of labour all right! We went to the farm and picked, husked, blanched, cut and bagged 70 gallons worth of corn! It was absolutely insane but extremely satisfying work. I am sure Maureen is thrilled she recruited Sasha and I for the job.

In the afternoon I excused myself to go exercise Cherokee. We had done most of the work by that point and I am loath to drive there without working that horse. So, I cleaned him up, tacked up and went out to my favorite field. We were having an excellent ride, he was responsive as hell. I really just had to think about what I wanted and he would do it, except for anything lateral, which he was unsure about, but I wasn't surprised by that since it's been more than a month since I've worked on it. We were doing a nice relaxing extended trot when Cher tripped. Bad. You know those times when things happen fast and slow at the same time? Ya, it was like that. It's somewhat funny that for a buck-y horse, I come off when he trips! To be fair, he went down himself pretty hard, so there is no way I could have "stuck it". We both came out ok, I landed pretty easy, Cherokee was a little stiff after but clearly nothing serious. My first fall in about 15 years, it was kind of interesting. And scary :)
Hastily scribbled by RuckusButt at 8:02 PM No comments: