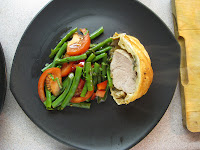 Served with a green bean-tomato salad. This is a very simple dish that seems to wow guests. I saute mushrooms in butter/olive oil until lightly browned, add a splash or three of sherry or white wine, some fresh thyme and s&p. Take off heat and stir in some heavy cream (half and half will do ok). Roll out one sheet of puff pastry, spoon some of the mushrooms down the centre. Lay pork tenderloin on top of mushrooms - season the tenderloin! - top with remaining mushrooms, fold up pastry and bake. Great, now I'm hungry.
Hastily scribbled by RuckusButt at 7:25 PM No comments:

Hello, October? We need to have a talk. 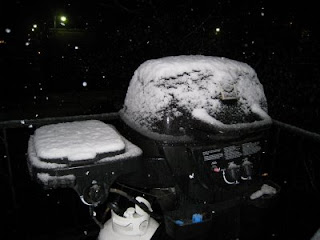 They say pink is the new black, and 30 the new 20. Now, apparently, October is the new January.

I actually like snow and prefer it greatly to the muddy-brown of late fall/early winter. But really, October? This picture was taken earlier in the week and I wish I had taken a picture the next morning as it was pretty incredible. Hazel was thrilled! Today was around 13 C so the snow is mostly gone, leaving a mucky mess behind. And so it begins.


Hastily scribbled by RuckusButt at 7:01 PM No comments: