If anyone out there has heard of these patches and has some experience - whether it's first or second-hand, positive or negative - I'd like to hear about it! Please!!

A couple weeks ago, Willy took a huge leap backwards in terms of his headshaking after 4 good weeks. It was sudden - one day he was awesome, one day off, next day shaking as bad or worse than ever. I had the chiropractor back out and she didn't find anything to explain the sudden regression but we had some ideas like backing off the soft tissue work I was doing just a bit, in case he is ultra sensitive and she also showed me another TMJ adjustment technique. It hasn't helped, though he definitely gets something out of it.

That lead me to start going through the bookmarks I've accumulated on headshaking, just deperately looking for, well, anything really. That's when I re-discovered a link (http://www.signal-health.com) to this Equiwinner product that claims to help with headshaking, anhydrosis, EIPH bleeding, tying up and a few other things. There is some science there but it's hard to assess the logic as I'm not a biologist. Further, even if the science is sound, I don't know if this patch actually is effective at producing the effect they describe. Yes, I would probably be better spending my time searching journal articles rather than posting but let's call this the public opinion phase of my research!

To give a brief summary, the idea with respect to headshaking is that electrolytes don't always function as they should in the body, regardless of overall levels. The cells don't uptake the ions properly or in the correct proportions. We know many ions are vital for the proper functioning and repair of soft tissue. The claim is that this leads to an increase in blood pressure at rest (apparently high blood pressure in resting horses is rare) and therefore blood pressure increases well beyond normal levels with exercise. This increase in blood pressure can lead to cellular damage.

Now we need to consider the fly response in horses (bare with me!). Over the horse's body, they have panniculus muscles which are the ones responsible for that fast twitch reaction to rid flies off the body. The head and neck of the horse do not have these muscles and, as we've all witnessed, the horse shakes it's head to rid flies in that area.

Back to the cell damage.  When the damage occurs around the hair bulbs, the sensation to the horse is like that of flies irritating them, eliciting the headshaking response. As stress (exercise, and hence blood pressure) increases, the sensations likewise increase, eliciting more headshaking.

Still with me? So this patch apparently is designed so the body recognizes the ions more effectively (some dude won a nobel prize for the discovery that the cells recognize the molecules around the ion, not the ion itself, therefore mode of delivery can effect whether or not the cell allows the ions to pass through.

I know enough biology, especially cell biology, to know that it sounds reasonable. I'd prefer to see come clinical trials assessing effectiveness of this particular product. They might be out there, that's my next step.

In the meantime...anyone?? Your thoughts would be greatly appreciated.

Hastily scribbled by RuckusButt at 11:20 PM No comments:

I have been quite negligent about posting anything related to food or the garden. I'm short on time but thought I'd do a picture post by way of catching you up on where things are. Most of these photos are a few days old and already it looks completely different out there.

I need to do a seperate "insects/pests" post because we've been inundated this year. So in this post I'm only including the beneficial or non-harmful bugs.


Horsehair worm on hydrangea. Horsehair worms are parasitic
to other bugs and cause no damage to plants themselves. Here,
it parasatises the hydrangea leftier and helps us out a bit. 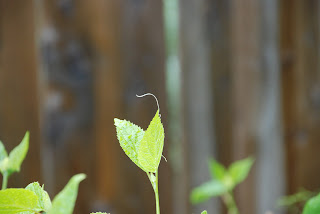 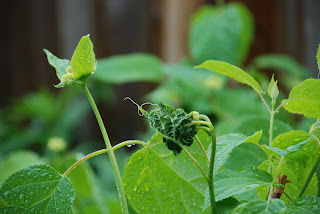 The theme this year seems to be "suckers."  The tomato suckers are out of control - normally I only pinch the very early ones and then leave the plant alone. Last year I went completely au-natural and regretted it as I had tomato plants that extended horizontally from one side of the 10' bed to the other. Yeild was great but harvesting was difficult and, in a less forgiving year, the lack of air circulation could have encouraged fungal or other problems.

The strangest thing. Even the peppers have suckers! I've honestly never seen them produce such huge suckers. By the time I realized it, many were too thick to remove. And they're flowering like crazy. I guess we'll see what transpires. At least the peppers don't vine out like the tomatoes! 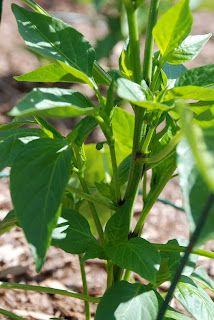 Ok, these next ones are supposed to be a sheppard pepper ("Carmen"). The visual distinguishing feature between them and my Crimson Red peppers is that the blossom end of the Carmen are rounded, whereas the Crimson are very pointy and the overall pepper is narrow and pointy. Hmmm. Either we messed up or we are inadvertently cross breeding a lot more readily than last year. While this cross seems a match made in heaven, I would like to have some peppers with no heat. You know, for guests. ;-)


This kind of fruit set in June??
They are now about 6" long! 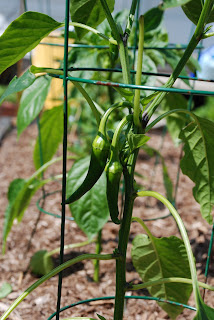 They are already much larger than this and could be harvested soon. I don't think the temps will be warm enough for the next few weeks to ripen them but I'm hoping to at least get a blush before I pull them. They are tasty even when green, but you know... 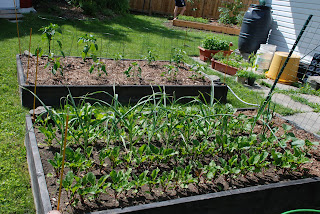 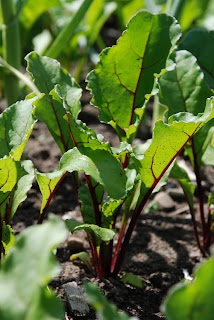 Raised bed: Carrots and some tomatoes.
In behind are two first-year grape vines. 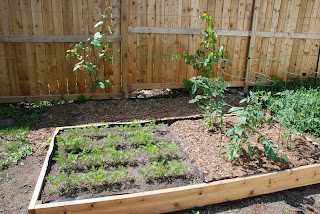 Little lovely, destined for my salad. I can almost taste it. 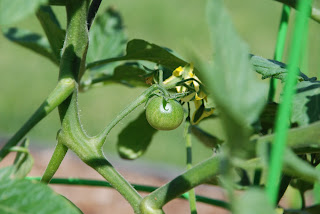 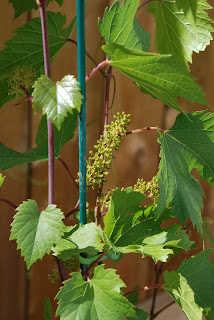 Zucchini have started up. Mostly female flowers to start,
the males are now waking up. Not sure yet if this lovely has
been fertilized or not - we should know within the next day. 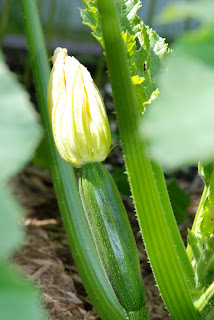 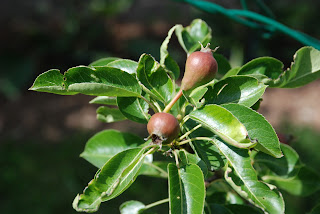 Mystery Stuff! These were on our apple tree.
They look like a cluster or seeds or eggs.
Weird little fringe around them, any ideas? 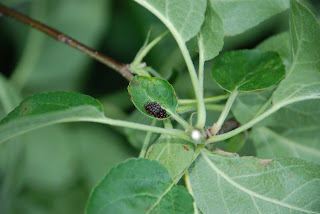 Close-up. Resolution isn't great but does
anyone have any ideas of what these could be? 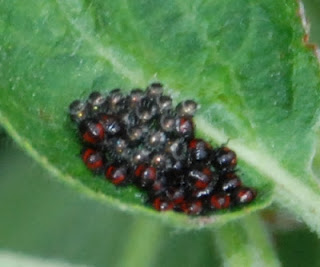