I wish I had something exciting to report like, say, a new horse. But no. No. Nope. Nada. No horse for me.  In case you too, dear readers, think surely I must be being picky, allow me to give you a rundown of the last few "prospects."

After canceling my trip out of town to see the wonder-winger and son from my previous post, I immediately set up a viewing with a more local possibility. This was through a girl (and yes, I do mean girl - she was surprisingly young!) who runs an equine sales website and organizes viewings and marketing for sellers. I could find no one that knew anything about her and was hesitant as it was to do business with that type of arrangement. But I'm willing to see how it goes.

So out we go to see a 3 year old gelding last Friday. I'm ok with young and green as long as it's got a good brain. This is roughly how the visit plays out. He's about 16.2/16.3 right now, has been started slowly, is barefoot, lives outside but is also ok coming in at night, appears sound, clean legs. All good, plus he's cute and well mannered. A bit bum-high but he's big and 3, so no biggie. Oh, and he got kicked in the face as a baby so you can see a very slight dent in his face (barely noticeable) and they had to have some teeth pulled on one side cause they were crushed and also when the adults came in we pulled those because they were coming in crowded. Ok, not great news, certainly something to ask the vet about if we get that far. Under saddle, horse is soft and relaxed. Lovely, really. A bit of a push ride but I'm sure with some fitness and a bit of waking up he will be fine. I like him quite a lot. Feel hopeful. 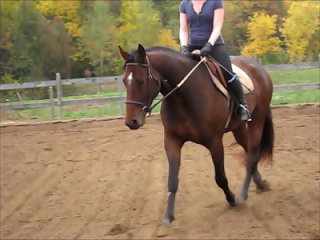 Oh, and seller was Brumby's owner's former coach. She asked me to say "hi" for her. So, I sent a message later on. I got a reply saying this person is a liar and a thief, has been sued for fraud, etc,etc. Hmm, she seemed so nice! Then, as I'm describing this to another friend later that night (my birthday, incidentally), we realize it's the same woman that sold my friend her first horse who, as it turned out, had navicular. Granted, my friend should have gotten xrays but it was her first horse and it seemed sound.

Anyway, not exacly the kind of person I'd like to give my business to. 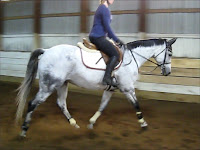 Then I go see a mare who is 10 and has shown hunters and jumpers successfully, including in Florida. The more I watch the video, the more I like her but I didn't feel anything special for her. They jumped her 1.15m and I was just like "meh" about it. Not that it isn't impressive, and it's certainly more than I need right now, I just didn't feel it for her. They stuff her ears for every ride, which seems odd but I guess is really only a minor thing. What really bugs me is she has tiny feet. Now, she's not a big mare, either (maybe 16hh) but her heels were also crazy long and she had egg bars in front. They tell me that they've never had them on her before but she started developing a quarter crack in Florida last winter so they are supposed to help that grow out. I'm told the farrier isn't worried (he's a well respected farrier in our area, who also travels to and from Florida for his clients in the winter). I'm told she's never been lame a day in her life. My coach says we will need to "extensively" vet anything we buy from these particular sellers. This warning comes on top of our understanding that I will fully vet anything I want to buy, including x-rays, so it's an extra big warning.

Next up - two well-bred mares from someone who drives me crazy and is trying to steal my business in terms of board/coaching/training despite the fact I clearly said I was horse shopping only. I'm only going because the horses are nice.

I am NOT cut out for the business side of the horse world..
Hastily scribbled by RuckusButt at 10:02 PM 6 comments:

The No-Man's Land of Horse Buying.

Honestly, that's what it feels like.  Someone asked me how it's possible that I haven't found a horse yet in this abysmal market. The truth is, I have no idea! On the surface, it seems like they should be easy pickin's but the reality is finding the right one is incredibly hard.

There are plenty of horses within my budget, to be sure. If I was looking for a green (but not necessarily young!) Thoroughbred it would be easy...as long as I didn't care about brain, potential, or how it was started or ridden. I quite like TBs but it would have to be the right one. The other group falls into the super-nice-but-broken category. Or at least needing what I consider significant maintainance. There is the stunning mare who injured her superficial digital flexor tendon or the 9yo gelding who needs adequan injections in his hock. While both might be reasonably fine, I am just not in a place for risk-taking. Perfectly healthy horses are a big enough risk.

So those are the horses well under my budget. Then there is the group that starts at about double my budget! The ones in my range tend to be an odd mix. That, and maybe I'm picky. I don't think I'm too picky though.

I did find two potential options a little ways out of town.  First is an 8 year old, Dutch Warmblood/TB by Tricolore. I'm interested in hearing thoughts on him. I will withhold my thoughts on him for now so I don't bias the few comments I might get, lol.


Then there is a 4 year old who appears to be quite green but I think he has better movement than the older horse (who is, incidentally, the sire). Not sure if he was an oops baby or if they thought of keeping the above guy a stallion or what. I guess we'll see. This guy is recovering from an abscess, so he might not be rideable by Friday.

Can't seem to embed it here, so here's the link if you are so inclined.
http://www.youtube.com/watch?v=RKxGUFYjSfs&feature=share&list=ULRKxGUFYjSfs