Last weekend I met the Fjords and their family. Everything was still icy so this was just to meet them and check the place out etc. The family is very nice and the horses are well cared for, so I was happy to agree to try out an arrangement where I exercise at least one of their horses, Edgar. Edgar is only 5 years old and he spent last summer in training but he still needs some experience and miles. Edgar's owner is just not able to do that right now. For inquiring minds, I feel it is not my place to discuss other people's lives on my blog, so you will just have to trust me when I say that the need for help is due to an entirely honourable situation.

This is Edgar. I wish I didn't cut off
the tip of his nose in the photo! 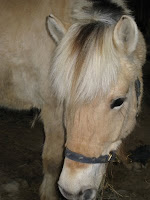 Today I went up for my first real "session" with him. Of course, spring is just begining here so the horses are all furry, furry beasts. Actually, make that furry and muddy. So I started the process of getting to know him with a good, thorough grooming. Edgar is very people oriented. He is kind and interested in what you are doing. He is also smart and clearly tested me the first little while. At one point, I turned my back and went to get something (a sip of tea, in fact) I turned around and he had undone his lead rope and strewn grooming tools all over the place! I honestly have no idea how he could manage to do it so quickly and silently. Little bugger. The good thing is that he is smart so he learns what he can and can't get away with quite quickly. I am sure he will stay a trouble-maker though.

Edgar is wondering when I am going to be done with all the
fussing. Look at the fur on the ground - I had just started!
Man, Fjords are fuzzy! The chunk out of his mane was my
marker for where to trim to.
(He is not as "nesty" as he looks here, honest) 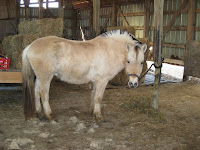 I took a break and decided it was time for a ride. I saddled him up and he acted like he did that every day. He was a little more annoyed at the bridle but I am pretty sure that is because it got in the way of the almighty hay pile. Very food motivated! Edgar is pretty green and he hasn't been ridden in months (Fall, maybe?). I was told he will take advantage of a rider who isn't capable of controling him. He did very well; we had no real issues, just him testing me a little now and then. I can tell he's had some training but he is pretty wiggly, for lack of a better word. Straight lines were a pretty big challenge...more like a series of little zig-zags. He did spook a couple times, but he didn't move more than 6 inches either way - basically spooked in place. Nice. I am certain he was just feeling good and not used to being out under saddle in a big field like that.

He really carried himself nicely when he wanted to. Hopefully I can make that more frequent in time. I really felt like I was riding a much bigger horse! So far, so good. I wasn't looking for this type of project but I think it's a good match.

Crazy owner told me to go ahead and trim his mane. It was starting to get heavy and flop a little. I have never done this before AND was given kitchen shears to do it with!! Surprisingly, they worked very well. I would still love a pair of clippers but totally understand not wanting to pay the crazy $ for them.

Here is the mane after the first few cuts. Oh my, I was so scared!
HorseOfCourse, I apologize for massacring your native breed.
I promise I will make it better next week! 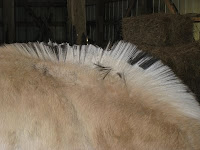 I forgot to take an "after" photo but it ended up ok. Not perfectly smooth across the top, but I think you need to do it over a couple days anyway. Oddly enough, Edgar seemed fairly sensitive to having his mane combed. Most horses don't even notice it...wonder if that's usual or not.

All in all a great day off work! More to come.


Hastily scribbled by RuckusButt at 6:27 PM

Hi Ruckusbutt!
I've been away for the weekend, and here I see you finally visited the Fjords!

Your Edgar sounds like a real Fjord to me.
Pony smart, yepp.

And congrats to you to cut away on that mane!
Even a sharp pair of scissors turn dull on a Fjord's mane, not to speak of the fingers on the hair dresser, lol!

You bet, pony mischief all the way! Not a mean bone in his body though. I think he will be pretty fun.

I was honestly so afraid to cut his mane! The shears his owner has are really good, they cut the mane and my hands were not sore after. She told me "go ahead and do piano keys or whatever you want" Um, yeah ok, right...let's just get through a basic cut first :)

On another note HorseOfCourse, I really wish your blog would let me comment! I've tried so many ways. I AM reading though and enjoying it. I always wish I could read Irene's comments!!

Thanks Ruckusbutt!
How sad it won't let you comment, I'd love to hear from you.
What happens?
It doesn't help if you "reload"?
(I wonder what I can do about it?)

Thanks for visiting my blog!! I LOVE Fjords!!! How lucky you are. This guy sounds like my girl ;) She spooks in place, usually, if it's nothing too big. Think giraff and splayed legs everywhere. She constantly tests me too.

And I had the same problem with comments that you are probably having (I'm being nosey and read the above comments). I wish I could tell you why, but while our tech guy was here at my office, he worked his magic and now I can comment on everyone's. It's so frusteraing, isn't it?? It has to do with the security and cookie settings or something. If I can ever find out, I'll let you know!

Ruckusbutt, I've set the comment field in another modus.
Maybe it helps.
Would you be so kind and check at any time convenient for you?

Hey Ezra, thanks for stopping by. I enjoy your blog. Be as nosey as you like, it is a blog after all. HorseofCourse fixed her comment issue and I am very happy about it.