Lessons of Another Kind

It was an absolutely glorious day today. The sky was clear; it was warm but low humidity. There was enough wind blowing to keep you cool while working and to keep the bugs away. Perfect.

Sasha and I went up to the farm to help out and for me to work with Cherokee. I decided I wanted to hit the trails today. Cherokee was in great form, he was actually very forward and wanted to go. No spook and no growing roots. This is BIG because last year at this time he spooked at everything and it took some convincing for him to start down the trail. We ride through the farm’s maple sugar bush which has 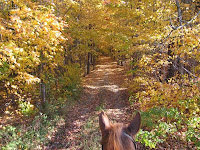 really nicely broken trail all through it.

I don’t have many pictures of our trail(s) but here is the entrance of one route, taken last fall. 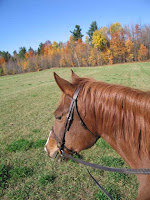 After some time, we come to an open field which is fantastic for doing a little schooling or just letting loose.

Sometimes I let Cherokee choose his own gait/pace after I’ve done a few transitions to make sure he knows who calls the shots. Usually, he really likes to trot and it’s a nice one…like a touring trot! Today, he wanted to canter, canter, canter. This was also a pleasant surprise since he is historically quite lazy about cantering. I interrupted him several times to take trot and walk breaks and he was good about that but I could tell he would go if I let him. I think he was excited to get to “the field”. Once there, I let him go for a bit. As long as he was straight and not crazy, I was fine with him having a little fun. Well ok, it was fun for us both!

Now, here’s the lesson. We were cantering along happily and I started thinking how lucky I was to be doing what I was doing at that moment. And then Cherokee bucked. I was so relaxed and he was so good it was completely unexpected. Except I should have expected it because he was a bucking, spooking fool when I first started with him last year. He was so much better by mid-summer last year and has been great this year (yeah…all two times he’s been ridden, I know!!).

So in that split second when it seems like time has slowed I thought about whether to “stick it” or not. I am very good at sticking bucks, I think it’s because I grew up in and always watched the stampede :) In any case, this time I decided to bail. Since I was unprepared for it I think it would have been potentially more dangerous to try to stay on. So off I came, no problem.

Cherokee thought about hanging around for about one second, maybe two. I think he might have if it wasn’t for the little pony waiting back in the field! Of course, we were at the farthest point too. I started to run. Not to catch the horse, I’m not that optimistic. No, it was because I could imagine what my husband would think when he saw the horse return without me.

Turns out Sasha didn’t hear Cherokee approach. He did notice that Hazel wasn’t beside him anymore so he walked around the side of the house and saw the horse grazing next to the pasture fence. His first thought was that I must be back already, until he saw the bridle was still on and I was no where in sight. Clearly not how I would leave a horse!

Long story short (or shorter), I was fine except for some blisters on my heels (riding boots are NOT good running shoes!). I met up with Sasha who asked me about 10 times if I was okay.

Then I got Cherokee and explained to him that he just won 30 extra schooling minutes :-)

Here we are, right after I got back on. 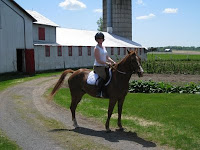 It was, after all, a really good schooling session. For both of us!

Hastily scribbled by RuckusButt at 7:08 PM

I have found out the hard way that I am most prone to fall off at those occations when my mind is elsewhere and I am going with the flow, lol!
And, as you say, those split seconds when you have to take a decision to try and stay on, or letting go...
Glad you are all right!
And walking in riding boots? Hopeless.

Too bad you came off but at least you weren't seriously hurt except for the blisters.
Glad to hear he got some extra schooling for his antics.

Yes, I was lucky not to be hurt, although I am a little stiff today :-/

I really should have known better than to be in la-la land. It was just so fun! I do think it is good to be humbled with a wake-up call once in awhile. Not to make you worried or afraid, just more mindful, you know?

HorseofCourse - I think this will be my first treat-training exercise - when the rider comes off quickly I stand still and voila! Carrots!

Grey horse - we worked on picking up the correct lead, his favorite, lol. He is bad about his right lead and I'm pretty sure he must have used his left the whole way home. I say that because he readily picked up his right lead every time so I figure his left leg was tired :) That, or he knew he better behave!