I finally got the chance to ride a horse I've been longing to ride for a very long time at my lesson barn. He is an OTTB that I've been secretly wanting to ride for at least 6 months. Last week, I made my desire known to my instructor. It paid off this week. His "usual" rider does well with him but tends to hold him in too tight, a fairly natural reaction to his fast, fast, fast, approach. I was both nervous and excited for this opportunity as I love his build and his expression.

I mostly worked on getting him to relax and soften. The usual "release as reward". I quickly realized that it worked best to give him a fairly strong correction/half-halt and release as opposed to a softer correction more frequently. He is used to being held fairly tightly most of the ride, from what I've seen.

Our warm-up and trot work was very good. He was relaxed and most of the time soft and on the bit. He would occasionally be reactive, fast and high-headed but since I was able to be consistent and calm he would settle fairly quickly. Until the canter work.

He was fast and not all that well under control at the canter. He wasn't super crazy but I had a hard time balancing the aids. It is difficult to simultaneously not hold too tight, keep him from running all out AND prevent him from breaking. It might sound strange that he would break, but he is so used to being "held up" by the mouth that when you try to have 2lbs versus 10+lbs of pressure, his balance is off and he subsequently breaks gait.

There are a lot of issues going on here, for sure. But what I am most interested in right now is whether verbal praise is enough. The idea is that every time he relaxes and softens, I want to reward him. This horse did give me several opportunities during our hour of schooling, which is great. The release is the main reward, but I think it would help to have an additional reinforcement. Do you agree?

Giving treats at this time would be impossible, at least for me. I would not be able to keep the action I want and then give a treat. I would have to stop or walk him first and then I think I would be rewarding the stop/transition, not the soft, on the bit, forward motion. Also, since I ride with 3-4 other people, stopping for treat rewards would be disruptive, I think. This whole issue is compounded by the fact that I will only ride this horse once or twice a week (unless I lease him for the fall/winter...) and I am not his only rider. He is not ridden by inexperienced riders, but there is still variation in approach, no doubt.

Do you think verbal praise is enough of a reward, in combination with the release? Any thoughts on how to approach this situation? He has already shown me that he is responsive to the way he is ridden in the moment. For example, I wondered how he would react to not being held in death-grip because I knew I would not be doing that. He quickly adjusted to my level of contact and improved greatly in his trot work. I am not being arrogant here, it comes from my instructor's feedback. It also just makes sense that helping the horse carry himself will be better in the long run.
I want to go from this 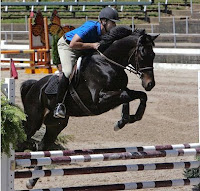 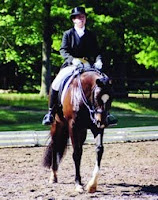 I definitely want some improvement in our canter work if I don't want to resort to holding tight. I just don't think that is a long-term solution, though it might look better in the short term. We did have awesome moments at the canter where I had exactly what I wanted. I want the best way to communicate to him that he has it right, as soon as he's doing it!
Any thoughts?
Hastily scribbled by RuckusButt at 11:16 PM

Just an idea but you know how with clicker training you make the clicking sound then reward the behavior? They start to associate the click with the treat? Well, you could train him on the ground to recognize...let's say a squeeze on the crest above his wither...or a specific clucking sound as a cue that he is about to get a treat or praise... and then when you are riding you can touch that spot or make that sound and he will associate it with the praise...just an idea.

It is always difficult to give some input when you haven’t seen a horse in reality, so these are just some general thoughts, ok?

I think I can relate a bit to your problem as there are 6 active racehorses in the stable where we have our horses. My hubby owns 1.5 of them.
Race horses are ridden with a strong contact when doing canter work, pretty much on the forehand.
As a consequence of his earlier work an OTTB needs to rebuild his muscles to be a “normal” riding horse. Normally that will take between 6mths to a year of dedicated work. In addition he is often stiff and lopsided unfortunately.

From your description I would guess that he is not ready to work without contact in the canter yet. I believe he needs some “transitional time” to be able to find a new balance under rider, and that you need to approach this step by step.
Another thing that you might have to take into consideration is that if you take increased contact on the reins that equals “more gas” in a race horse, so it is might affect how he reacts when the rider is to reduce speed, doing halfhalts or transitions.
I don’t know how much work that has been done with him since he became a riding horse, but from your description it sounds as if the canter work is pretty much how it is when they come off the track.

Coming back to your main question.
I believe the strategy how to move forward is depending on how involved you are going to be with this horse.

If you are contemplating to lease him, I would introduce canter work in the longe line, with side reins.
This will help him find his balance without rider, and you can help him to move weight off the forehand, engage the hind more and get a more balanced canter.

You know I use treats when I train, so personally I believe it is a good help.
You will probably get quicker results by using treats (or read clicker training). Once your horse has understood the “reward sound”, you are not depending on giving the treat immediately; he will understand from your sound that this was the desired behaviour.
But to get there, you need some time to make him understand the connection between the click/sound/action and the treat. And that might be difficult if you only are to ride him once or twice a week, and together with other riders?

If you have the possibility, I would consider to lease him as this probably would be the best way to get some progress and good riding experiences on him.

You know what I really need? My own horse so that I can work on things properly! One day...

Until then, all I can do is improve, learn and try to help the horses do the same.

Horse crazed - that is along the lines I was thinking. I'm very proficient at clicker training...with dogs! I like your ideas for cues, it would need to be unique so that other people don't accidentally confuse him.

horseofcourse - I completely understand about not knowing the horse. I would never think internet advice is necessarily appropriate for all horses and riders. That being said, I found your comments helpful and they gave me some things to think about.

You are right, he is not ready for no contact but I don't want to be holding him up, either. From what I've seen, that's what others tend to do. In my opinion, he will never learn to carry himself that way. He gets the concept at the trot and has great moments at the canter too. I just want to make sure to reward those great moments so that they increase in frequency and duration.

He has been retrained enough that he no longer gives more gas with increased contact. I do think he might "forget" sometimes still. I haven't ridden him enough to be sure.

There are so many different opinions about the use of side reins, I don't know what to think any more!

I am still not sure how well it will work to use a treat type system in a lesson. It would be ideal to be able to work him alone.

I'm very happy you finally got to ride the TB that has caught your eye. I love TBs.

I don't know much about retraining OTTBs, so can't add anything specific from experience. At the horsemanship clinic I just attended, one of the students had an OTTB. The clinician has been giving her private lessons for quite awhile and mentioned that they had done a lot of work on his canter transitions. Early on, when he was asked to canter, he would explode into his canter as if he were jumping out the gate at the track. I imagine that is an issue with most OTTBs. I think they practiced transitions from canter to trot and trot to canter a lot.

I hope you decide to lease him. Sounds like he needs a consistent rider and trainer(who are not afraid and won't ride with a death grip on him) to get him over this.

And of course...start with the ground work first.

RuckusButt - if you open up for a question, I talk too much!
And in particular if it is something that lies close to heart...
Sorry for ranting.
I guess I just wanted to say that there are no quick fixes.
I hope you can lease him - it sounded as if it was a horse that spoke to your heart? and that is important, if you ask me.
Just look at Fame, lol!
But I am grateful for that every day ;)

Horse of Course, you can talk as much as you want here! I did not think you were ranting -I love your thoughtful and experienced comments and I'm thrilled you took the time to write them. I should have thanked you more enthusiastically, I was very tired last night when I commented!

OnceUpon, he definitly needs the consistency and regular work.

He does speak to my heart. I'll post more about him when I get some pictures, next week.

I think verbal reward works. Understandable that you can't give a treat while riding. With my mare, I always give her a little scratch with my knuckles on her withers where my hands are. She has always relaxed when I do that. The trainer figured it out. He used to use the reins to scratch her withers when she did something good and he could feel her just start to relax, so we've always gone with that.

Good luck in any case and I hope it all gets figured out and he progresses with you :)