Have you ridden a Fjord lately?

I haven't been up to ride Edgar since just before I broke my arm at the beginning of June. After the arm was ok to ride again, I was hesitant to continue riding Edgar at first. It was my closest experience with "fear" and riding. I wasn't really afraid but I WAS reluctant to risk getting hurt again soon after my month off. Time off is HARD. I hate being limited in what I can do.

While I was recovering, Edgar's owner tried to find another exercise rider. It didn't go so well. Many clearly weren't experienced enough and she didn't let them try him. A couple were ok, but couldn't handle him. One girl seemed to be a good enough rider but when he bolted on her, she couldn't control him. His owner was considering selling him to a home that could actually make use of him. She just couldn't do it though.

My wrist got better but I was still reluctant to get back into working with Edgar. It is very slow going when the work is so far between. It is also difficult since there is no indoor arena or outdoor ring to ride in. I ride in a hay field. 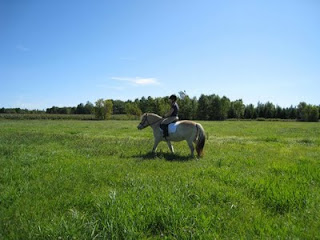 I felt like all the responsibility for his riding was up to me. To be honest, I wasn't up for that task. It is selfish to say but there just wasn't enough in it for me. I had to drive 30-40 minutes to walk-trot around a hay field?? It was hard to motivate myself to go.

On the other hand, Edgar's owner is an amazing person. I really like her and she could really use some help. I've said it before but it bears repeating - life threw some curve balls to this family that resulted in delaying her plans with the horses that she had waited so long to purchase. I'm not going into details out of respect for her privacy but trust me, society owes her a debt of gratitude. I also really like working with Edgar. He is such a people horse, even if he is a trouble-maker :)

I had a nice long talk with Edgar's owner. I discussed with her my dilemma about wanting to work with him but also my commitment to improving my riding and wanting to move up in that respect (hence leasing a Hanoverian :) ). She can't bring herself to sell him just yet. It just isn't "safe" enough. I agreed. She has been longing him and doing other groundwork, so at least he's getting something. She decided to just let him be a lawn ornament for the next few years until she can dedicate herself to him. We also said that I would come up whenever I can, no pressure as to how often. Something is always better than nothing (as long as that something isn't making him worse, of course!)

So I went up to ride Edgar today. The last time anyone has been on him was me, back at the very begining of June. I expected some protest and bucks, maybe even bolts. But I approached getting ready as if he and I did it every day. His ground manners are so much better than in the spring! He was still playful and knocked everything off the ledge in front of him BUT he wasn't pushy with me at all.

Under saddle, he was awesome! Not one single step wrong. I was amazed. I also forgot how nice his trot feels. I could sit to it all day. 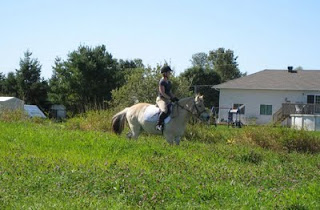 I've figured out what the main "blow-up" issue is, I think. I realized it long ago but never really put it into words, I just rode and adjusted accordingly. Now, I feel I have to be able to describe it to others. Stay tuned for my revelation, I am just too tired tonight to type! 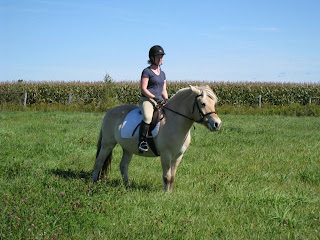 Why am I so tired? We did a lot of stuff around the house this weekend. Along with battling grape vines that have taken over, I painted the shed.
Notice the rust. It looked worse in real life.
Also, the roof was almost completely bare of paint. 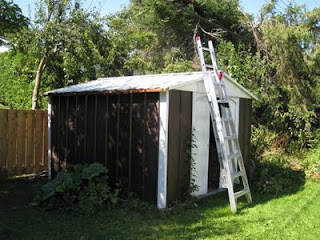 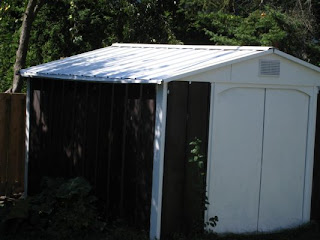 The (almost) finished product. I have to say
I love this shed now. All I need are the ponies :) 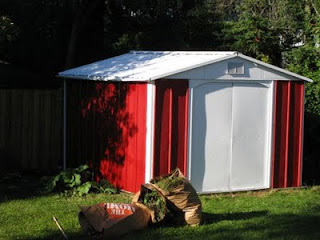 Hastily scribbled by RuckusButt at 8:35 PM

WOW, what a makeover on the shed! It came out as new!
I can understand that you were tired...

Nice to see Edgar again.
I am looking forward to hear about your revelations. Glad you had a nice ride on him!

What a cutie! I used to ride a few greenie Fjord fillies, they were a lot of fun! Sometimes those draft ponies can be a lot of trouble especially when they get someone's number. With those little wedge necks they can be hard to control when they get going. Good luck with Edgar I look forward to reading more about it.

Hope to hear more about Edgar and your adventures with him. His owner sounds like a thoughtful and considerate person, who cares for the well-being of her horse.

Thanks for your comments!

It was great to see Edgar again and I am still amazed at what a good boy he was! It gives me more confidence that he will retain information even with a sporadic schedule. We will make a nice trail horse out of him yet!

Oh and HoC, I chose the colour to brighten things up a little and to get a barn-like look. But when I took the photo it reminded me of those traditional red houses in Sweden you blogged about. If I can't actually have a house that colour, at least I can have an "out building" in red, even if it is tiny!

Edgar is built like Marley. They are soooo strong, these draft, stout, stocky Fjords.

I'm so glad you had a good ride on him, and after all this time.

Looking forward to hearing more about it.

Yes, RB - it was quite the Scandinavian red!
But red is a lovely colour. It brightens up and makes you happy, doesn't it?

RB you transformed that shed. Wanna come visit and do some projects around here? I'm sure you would have the farm looking amazing in no time. :)

BTW I like the looks of the guy you are planning to lease, a very handsome boy.

HoC - It really does make me happy! I sip my coffee on the porch and look at it every morning.

Hey Melissa, thanks for coming by. I would LOVE to put in some good hard labour on your farm! I do think you guys do a great job of keeping the farm amazing without me though! And that big boy is pretty special. I can't wait to get on him again! Lease starts October 1st...