I had pretty much decided not to lease the big boy I talked about in my previous post on lease-hunting. His owner was looking for a more advanced rider and basically a co-trainer. I know I didn't ride all that well that day for a number of reasons but I am sure I wouldn't disappoint her if she watched me a few more times. It was worrying me so much...what should I do??...and finally, after my lesson on Monday, I came to a decision. I was talking to a couple other women I ride with about my dilemma. One made it clear - if you are that stressed and worried, move on! It's clearly not the right situation. It really could be that simple! I made up my mind to keep looking. I felt so relieved. 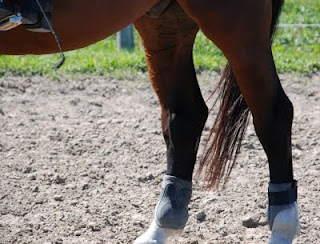 I didn't have a chance to email the owner right away, so I waited until the next day. I got home from work, walked the dog, and made dinner. I finally sat down in front of the laptop with the sole purpose of emailing the owner to say I was going to pass due to different wants/needs.

But there was an email from my instructor waiting for me. Turns out, the horse's owner just figured out in the last week that her boy was reacting to the saddle! Turns out he's been progressively getting worse in some ways with respect to behaviour but she thought it was a combination of the current leaser and having new people try him out. I've read enough about saddle fit issues to know that they can be incredibly subtle, yet serious, but very hard to identify as the saddle. This saddle "fit" by all reasonable standards but still was pinching him. It took some time before the owner was able to see real evidence pointing to the saddle. Of course, she feels terrible but is happy that she can now do something! I like this owner :)

So, we've agreed to try things out for October and then re-assess. I feel 100% better about the situation and am very excited for the opportunity. It looks like my riding is about to change considerably!

Alright, you guys with nice horses --- any tips, stories or anything really, that you can tell me about the transition from school horses to privately owned, nice horses? I'm told it will help my riding immensely. I have a hard time seeing how it's different, in a way. I know the horse will likely respond better, but people seem to tell me a fairly big transformation occurs.

I hope to update on Edgar (the Fjord I haven't really talked about since I broke my arm in June) soon. I've been putting off blogging about him! I am hoping to see him on the weekend so I might even have new pictures.
Hastily scribbled by RuckusButt at 10:07 PM

That is good news. A month with the new horse will give you a very good idea if you want to continue with him.

I really missed some posts, sorry. I didn't catch that you broke your arm and I'm very sorry to hear that. I will look at your previous posts, but do want to hear what has happened with Edgar.

No worries, OnceUpon! I often have catch-up days on blogs I haven't visited in awhile.

I got very lucky with the arm and had a fairly quick recovery. It is almost as good as new, the limitations I have don't effect riding which is great.

I don't know whether I have any tips apart from checking with the owner what possibilities you have to ride for a good instructor.
If the horse is well educated, I bet you will have some very nice sessions ahead!

I wish you good luck with your project!

Oh - I must have forgotten to mention the instruction part. One of the BEST things is my current instructor will give me private lessons on this new guy (I will name him once I get the owner's permission! Or make one up). The owner is now going to be coached by my instructor too. This will be excellent for consistency and learning and the instructor will be able to tell better what is the horse and what is the rider -she can usually see that anyway, but you know what I mean.

I am giddy with excitement.