This recipe comes from Maria at Horse of Course blog and you can find her post on this recipe here. As soon as she mentioned it I knew I wanted to try it.

I noticed that the anchovies in her recipe looked different from what I was used to. The ones I get are very small and don't usually have any skin left at all.

Whereas the ones in the Janssons recipe looked wider and had skin. So naturally, I did some research. And I'm glad I did!  It turns out that Swedish anchovies are pickled in a brine that is also somewhat sweet and has different spices. Our typical ones are just in a salt brine.

In fact, it seems that they aren't really anchovies at all, but rather sprats, which are a small sardine-like fish. However, sprats in brine like this are called 'ansjovis' in Sweden and this might explain the confusion in translation.  I am sure that this dish would taste pretty good with regular anchovies, but I think it would be missing something that the distinctive flavour of the Swedish brine brings.

Lucky for me, I have a source of Swedish foods in the local

Ikea store so I was able to try a more authentic version. 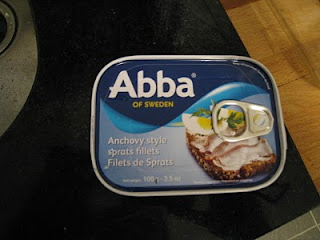 My collection of ingredients for the recipe. I used Yukon Gold potatoes simply because I already had them. I also used red onion instead of yellow because I had a large one already partly used. I am hoping these little changes won't interrupt the authenticity of the dish. 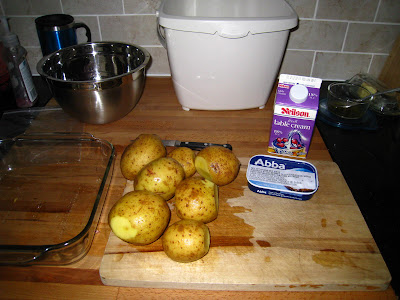 I used a mandoline to cut the potatoes. Well ok, I asked

my husband to cut them, I hate using the mandoline! 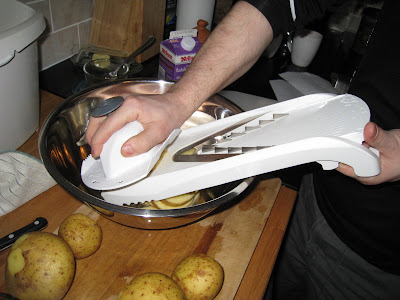 Here is the assembled dish. 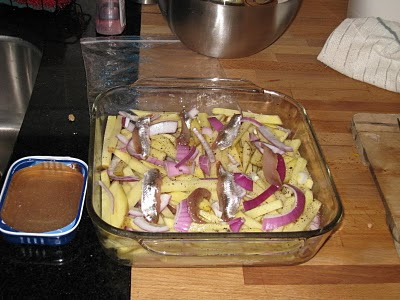 After this, I added a final layer of potato and the brine from the tin as well as a generous amount of cream, I baked it at 375F/190C for about 40 min. I covered it with foil for the first 15 minutes or so.

I served it with slow-cooked pork and root vegetables and a big dollop of sour cream. I didn't get a final picture - too hungry! I really liked this dish. There are three things I think didn't work perfectly for me.

1) The cream curdled during baking and although it didn't hurt the taste it certainly didn't look as nice as it should. I'm not sure if this is because I used 18% milk fat cream instead of 35% or if I shouldn't have added all the brine. Not sure, but it would have been nicer if that didn't happen.

2) I think the dish was improved by serving it with something else. The dish on it's own was very salty for my taste. Next time, I think I would not use all of the brine, maybe half. Serving it with sour cream and other dishes really helps with this, you can appreciate the delicious saltiness. And it IS delicious!

3) Really would have been great with beer! Sadly, I had none :(

All in all, a great dish and I'm glad I tried it. I picked up 2 tins of the sprats/anchovies so I will be making use of them in some other recipe, no doubt.
Hastily scribbled by RuckusButt at 8:26 PM

I was drooling over the stuffed squash and now this. Would you like to move to Tennessee? I wouldn't ask you to do any farm work, just cook, in exchange for living with some handsome retired horses!

Lol, I'd do it in a heartbeat! Live-in chef :) But I'd want to bring a horse (not yet purchased, hee hee) and husband (there must be some good Geology in TN, right?). And I'd do all the farm work you could throw at me, until it was time to prepare dinner that is!

Hey, you tried it! How fun!

Good you thought about the anchovies, and how nice that IKEA is situated around the world too!!

I believe the salty flavour has to do with the fat content of the cream. You need the 35% to balance the anchovies taste.
Another factor is the size of the potatoes and onions. Peel the potatoes and cut them thinner next time. Chop the onions in smaller pieces too, so you can distrubute it evenly over the whole surface.

But you def need beer!
(Pssst. And a small aquavite too!)

You're right, a higher fat content would have helped balance things out. I was trying to make it slightly healthier. That is why you should make during the holidays, not after! Good thing I had sour cream!

I thought I'd get a comment about the onion, lol. I sliced them instead of chopped so the size and shape mirror that of the potatoes. I admit the last layer looks like they are sliced very big, I was being lazy. The layer below they were more finely sliced.

I never peel my potatoes anymore, I love having the peel for taste and nutrients. I thought they looked like the same size as yours (?)

You know, healthy has nothing to do with traditional food, lol!

You can do it anyway you want of course, RB.
I just thought I'd give you some feedback with regard to the traditional way of doing it...and it is a bit difficult to see sizes on photos. I just compared to the box of anchovies.

You are so right! But spring is right around the corner (at least that's what I tell myself) and my breeches are feeling snug!

And I am very glad for feedback on the traditional way of making it! I think it is so fun to see how other people do things, try it out, get feedback etc. I will change things up for my own preferences sometimes, but then next time I'll try it slightly different. Good thinking comparing to the anchovy box, I'll have to go back and compare.