but I'm laughing all the same. What else are you gonna do?

Well, the attic of my house, for one. And Friday night, after a great dinner and lovely walk with my husband and Hazel, right before leaving for the barn, another thing was up there too. 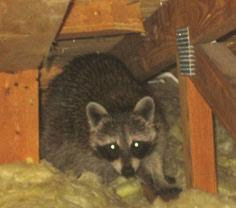 Photo credit: www.raccoonatticguide.com
Yep. A raccoon had  made it's way into the attic and was frantically trying to chew it's way back out. Since we only have one car the barn was out of the question and we spent the next couple hours literally driving ALL over the city looking for a live trap in the size we needed. As I drove, I started just giggling my head off. My husband was not so amused since he's the one who would be crawling around the attic. When I wouldn't stop he asked me if I was ok. Oh, yeah. Just peachy! Three minutes before the last option closed, we found our trap. Of course, she was gone by the time we returned home but we set the trap up there.

Of course, any time you go into the attic, little bits of fiberglass insulation end up on the floor. So, I went to the basement to get the vacuum cleaner.

Guess what I found down there? 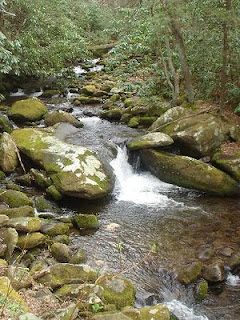 You're thinking raccoon, aren't you??  Thankfully, no. The hot water tank was leaking out the bottom and there was a nice stream from the tank to the drain. All I can say is I am very happy the drain is only about 4 feet away!

We now have a new water tank. I asked to have a smaller 40 gallon one put in instead of the 60 gallon we had. There is just no need for such a large tank with two people.Turns out our tank was really old and was so heavy they are pretty sure it was full of sediment. Joy. So overall this is a good thing, at least until we can replace it with a gas hot water on-demand system.

As for the coon, it seems the poor thing crawled in a vent that isn't in use and then had a heck of a time getting out. It scratched and chewed and made itself bleed a little in the process trying to scratch/chew metal. The good news is it got out and there is no evidence that she had been in there very long. This makes me very happy because I was ready to turn the attic upside down searching for babies.

Instead, we get to remedy the situation that left that vent open in the first place. When we moved in, the kitchen fan was set to just filter and recirculate the air. We knew we would want to have it vent to the outdoors and we got everything we needed but have been putting it off. So now that's getting done. We will, of course, put some wire mesh around the opening outside too. Oh, and if we almost started a fire when the stove knob was accidentally turned on during installation, setting alight the drop cloth on top, with us racing around the house trying to figure out where the smell is coming from...well, I would just keep that part to myself. It would just be too crazy to believe anyway.

Some weekends (or winters!) were just not meant to be relaxing.
Hastily scribbled by RuckusButt at 9:03 PM

LOL, RB, that was quite a story - or stories!
Not any dreary one-day-similar-to an-another though.

Felt like I was reading about a day in MY life, LOL!

Oh, so true HoC, at least I'm not bored!

I, for one, am ready for life to be boring for a bit!