Horses and Riding Update (it's about time!)

I uploaded a video to a draft post awhile ago and now can finally actually try to post it. I don't know about anyone else, but I haven't been able to comment or post for a couple days due to Blogger being "unavailable".

This particular day in the video (below) was one where we were working on much smaller jumps but working on responsiveness of the horse. I had a couple tough weeks with Brumby once we started riding outside again - he was doing a lot of this: 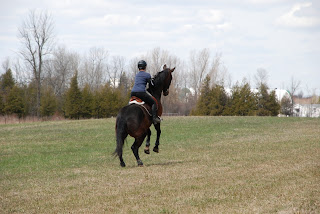 The time I typically have to work on these issues is when I'm alone. When I'm alone, I have less gumption for gettin' er done because I've never really been sure that he would, in fact, give up at some point. I envisioned starting a fight I would never win. One week, instead of working on more technical stuff, I asked my instructor to help me fight Brumby's boogey men. So we would work a gymnastic, set up on the galloping track, and then I would continue around the whole track, working through his tantrums. I changed what we were doing a lot. Tucking in and not looking where he was going? Fine, we did a series of 6 trot poles. Running off after gymnastic? Turn into the sand ring and do some figures, trot poles etc. Not wanting to go straight beyond the boogey man spot? Ok, we're going around the whole track. It helped immeasurably to have eyes on the ground. It gave me the confidence I needed to work him through it and learn that he does have a give-up point.

While I do think there is an element of fear in Brumby's behaviour at his boogey man locations, he is not the kind of horse that will get over it in a soft, gentle manner. I've worked horses like that; those who just need a bit of extra time and reassurance to go forward. That has not worked for us AT ALL. What works for him is to be confident and firm about where you want him to go. I am still sensitive to his worries but am much more determined in telling him that there is nothing to worry about. In the beginning, I got after him pretty hard until I got forward.

The beauty is that by making him go he reacts less and less each time out. When I gave him tons of time to look, etc, he just got more and more worked up about it. Now, most of the time, the resistance can be overcome just with my seat.

Where was I? Oh yes! So after a couple months of fabulous work indoors and begining to overcome some outdoor issues, we've been back to serious work.

In this video, the jumps are pretty small but we were working on rhythm and getting the right lead at the end of the line. Gumby's right lead is always an issue and I really wish his owner would agree to a chiro visit or massage.

So here is an example from that lesson.
I wish I could get pictures and/or video more often but my husband comes to the barn rarely and he's out of town all summer so it doesn't happen. One of these days someone will gift me the Flip I've been wanting forever and I will get more with or without him! Tonight would have been an awesome night for video - we did some pretty tight roll-backs and lots of fun stuff. Last year, I never would have thought any of this was possible.

I can't wait until our grass jumping course opens!
Hastily scribbled by RuckusButt at 1:26 AM

You're right....it IS about time for an update ! I am sure you'll work through your challenges as the weather improves this spring, slow though that may be.

You and Brumby looked nice in the video, and it sounds like you are making real progress on his boogy man. I think my favorite post of yours is the one where you made the diagram that included his boogey men in it!

Sounds like you guys are back to making progress again! I think his owner is damn lucky to have you as the person leasing him! :-)

I'm happy to come over and take some video for you - just let me know when. I'm out at the barn enough that I'm sure we could work something out.

At the rate we are going, the grass ring might be open in July! lol The rain is really delaying things...

Aw, thanks Laura! I like to think I'm a pretty good leaser...but then I'm biased ;-) I hear ya about the rain! My first show is supposed to be June 11th and the grass jumping field hasn't been set up yet. I'd like to do a few full courses before then! And there are more boogey men in that tree line that need conquering!

That's a very nice offer to take some photos. I'd feel a little vain taking you up on it though! My lessons these days are Fridays at either 6 or 6:30. You want to arrange a hack together soon? We can feed the bugs, lol.

I'm happy to take some videos/photos for you - think of it as a training tool - doesn't sound so vain that way! ;-p

I would like to go for a hack - looks like it is supposed to rain tomorrow though. Boo! Let's keep an eye on the weather and work something out in the next week or so!!