Yes, you read that right, I harvested produce from my garden. Today. October 15th. And I'm not talking squash or anything, either. 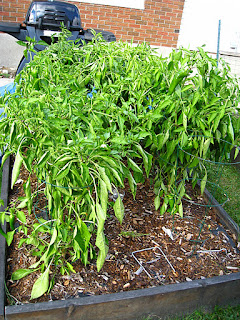 That is my main pepper bed as of this morning. It has been going strong and providing us with more peppers than we know what to do with. Well, that's not exactly true, I have been finding things to do with every one of them but it's getting to be a challenge.


Still so many gorgeous peppers. Most of them have
been ripening just fine, even if taken green. It makes
me giddy to see this in mid-October! 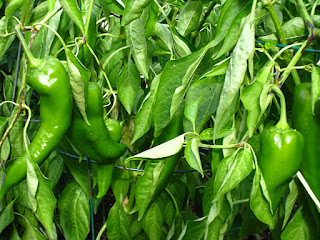 Also have plenty of tomatoes coming still. I broke down and decided that I would pull all but the cherry tomato plants. Those seem to still be actively producing so I can't bear to pull them but if we lose some to frost it won't be a big deal.

Yes, there is a bit of bacterial speck/spot on the plants.
The fruit of the cherry plants haven't been affected yet (although the
regular plants were).  It's kind of inevitable with tomatoes this late
in the year. Next year I am rotating growing spaces anyway. 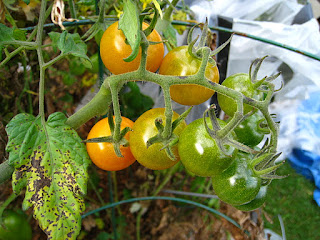 I decided the other tomatoes were a lot of work to maintain and had finally far gone enough to just harvest anything of decent size and condition. They have only survived so well because whenever the overnight low is too low, Alex lights tea light candles in the tomato and pepper beds before covering them with tarps for the night.

Or they are mutant plants. Whichever. 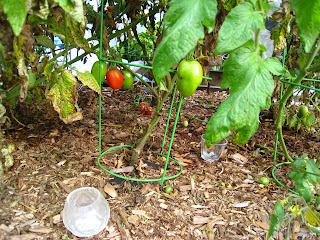 That stands for "fooled you" weather, of course.

Right, so, I took all the green tomatoes off as I pulled the plants. I figure if they ripen they will still taste better than grocery store options. I am really going to miss tomatoes :-(   Anyway, it ended up being a fair bit of produce!


This wasn't everything, either. I had at least one more
overflowing bowl of green tomatoes and some cherry toms too.
That bag of pepper is FULL! 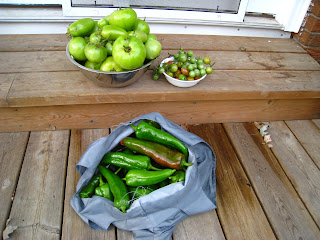 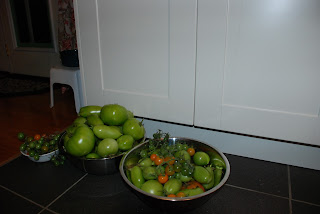 As far as peppers go, we decided to go ahead and pick the ones that were of a good size or were clearly not likely to ripen but left some promising ones on the plants since temps seem ok for the next few days. We ended up with this.

Not nearly as impressive as in person, 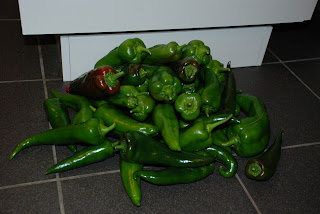 Hastily scribbled by RuckusButt at 11:54 PM

I laughed so hard at the "fooled you" weather comment that I blew cookie crumbs all over my computer screen and had to explain to Melissa what was going on ! She just went out the door to ride on this 85 degree Sunday afternoon !

nice harvest! I think it is cute (and smart) that you guys put a tarp over the garden and light little tea lights! Now that is some serious gardeing!

Wow! Your garden gave you enough to feed an army! I am jealous of your tomatoes. Our were done a while ago and we are back to the grocery version - yuck! I also love the "fooled you" comment.

Beautiful harvest. Those peppers are so shiny and pretty. The only thing missing is some soft music to go with the tarp and tea lights.