I have several other posts that I've been trying to finish so I can post them. But life is what happens while you're trying to finish blog posts! So instead, I feel like telling you about our vet visit today. Stay tuned though because I have some important changes to update you on! I plan to get all those posts out this week.

I had Will on the vet list today so he could be checked for whether he needed his teeth floated. It took a bit longer to get the right vet, Dr. B, out but it was worth so I could talk to him about Will's stifles while he worked :-D  Willy's teeth were done about 7 months ago but things have been increasingly pointing to the need for a float since just before Christmas. Or so I thought.

Dr.B felt around inside Willy's mouth for a bit and then asks me what kind of bit I'm using. I was a bit taken aback (no pun intended!) simply because I thought he was going to comment on the harshness of the bit. Because I know the bit isn't harsh, that would mean I am. Those thoughts instantly went through my head as I stammered, "Uh, a D-ring snaffle...uh, double-jointed...with a copper oval peanut..." 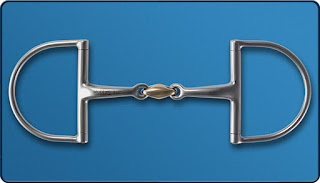 As it happens, my poor beast has developed a sensitivity to the metal in the bit. I honestly never even thought about anything other than his teeth! Dr. B said his gums were completely inflamed and there was so much swelling he could fold the swollen tissue from the sides of his gums over the top!

I am still paranoid that somehow it's my riding but I've been assured that although it's not excessively common, metal sensitivities do happen and they can take time to develop into a problem. He also pointed out that I've been riding Willy for 7 months and switched his bit ~4 months ago; he asked if I thought for a second it would take that long for crappy hands to hurt his mouth. I had to admit that was highly unlikely since the onset of Willy's mouthy troubles came on toward the end of December and have stayed about the same since.

With that issue more or less put to rest (time will tell!), my task is now to find a new bit. Dr. B suggested I could wrap my bit in vetwrap too. Obviously I think the best long-term solution is to find a new bit and besides, wouldn't vetwrap be kinda scratchy in the mouth?

Anyone else out there think this might be the excuse I need to try a Herm Sprenger bit?  The slightly more reasonable option would be rubber but I suspect that selection is limited (although I haven't really looked for rubber before).

All other news is good. Willy's stifles have absolutely no signs of problems, the ligament is gliding where it should. We discussed long-term prognosis and although of course he can't give exact answers with respect to timeline he could say that the majority of horses like him are absolutely fine and confirmed that "conditioning" isn't something you do in a month or two (like most people at my barn seem to think) but rather lifelong. At the same time, that doesn't mean he will always need this intensity of work.

I also asked what Dr.B thought of Willy's condition and weight. He said he is looking nice and fit and thinks his weight is good. That was nice to hear but I have to keep in mind this man vets a lot of racehorses, so he's used to the racing physique. I don't like fat horses but Will could still use some coverage. But I have progress on that front too, coming soon!
Hastily scribbled by RuckusButt at 7:27 PM

who never heard of that before! I am glad it is a simple fix though Does the vet think it is the copper or what metal? You could try sweet iron. I have always heard horses really like it.

I know, I kept asking if he was sure! It is one of the metals they use in the steel, the vet recommended going all copper or rubber. Typically nickel causes problems but I can't find the exact composition of the steel part of this particular bit, they just give the composition of the peanut. Not terribly useful.

At this point, I'm afraid to go with another metal unless it's full copper. Or unless I can find out the composition of the current bit. It is not fair that Willy has to bear the brunt of experimentation so I won't even try metal again for awhile.

I like Sprenger bits and much to Jason's chagrin (when he looks at the price tag "that much money for a bit??"). You could also try happy mouth bits maybe? What type of metal does the vet think he is reacting to? The joint in the jointed happy mouths are of course metal. And copper is not legal for dressage bits, correct? Obviously if you plan to stick to h/j that doesn't matter, but if dressage or eventing is in the back of your mind then you might want to explore non-copper bits.

I plan to stick with hunters for his first show season and go from there. I have no idea what is legal or not for dressage (and should probably make sure I know all the hunter rules, lol).

Vet didn't specify a metal. And he didn't mention anything about the exposed metal in the centre or at the corners of his mouth. I only thought of it later. Perhaps the gums (bars) tend to be more sensitive to metals that the tongue and mouth corners are able to tolerate?

Naturally I thought of happy mouth bits too. I went to a tack store after work, not my favorite one but it is directly between work and home. They had a couple of single-jointed snaffle bits with rubber and a wider selection of plastic bits (happy mouth and similar). I feel like the rubber bits are too fat (fat is only comfortable to a point, right?) and they also stink like rubber. Not sure how yummy that would be for a horse.

The plastic ones are, well, plastic. I'm not trying to be diva about it but I don't use plastics for things I put in my mouth, and I'm not sucking on them for an hour at a time!

I have found a few other people forums who mention metal sensitivity, so I'm not completely alone...though I feel that way on this issue!

that should read "people IN forums"! They were definitely horse forums, not people forums, lol.

For hunters as long as it has a D ring or similar it really doesn't matter what is actually in the mouth. Of course "non standard" bits such as elevator bits are not going to fly in the hunters but otherwise there really are no limits. For jumpers you can use any bit at all.

I've had a couple of horses really love happy mouth bits. They are apple scented or flavored or something and I had one horse in particular that just loved happy mouth bits and abhorred all other bits so you just never know!

Oh, and yes fat is only comfortable in their mouths up to a point. I agree with you that a lot of the black rubber bits just seem way to fat to be comfortable but a lot of horses seem to like them so who knows.