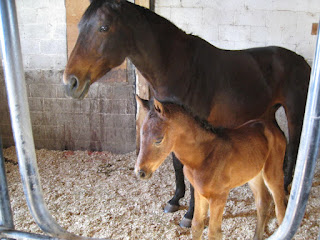 Hastily scribbled by RuckusButt at 12:00 AM

I sincerely hope that you manage to solve the headshakes. Has been some discussions over here about photo sensitivity and neurological causes.

It's easy to feel for the BO in this case. We've sure been down the road of unexpected death a number of times and it doesn't get easier just because it's somewhat familiar.

Hope the month turns around for both the barn owner and, of course, for you and Willy too.

I'm so sorry about the mare. What a sad thing. What will they do with the orphaned foal?

I've been thinking about all these things since you told me... :-( I hope arrangements have been worked out for the foal...poor little thing.

I hope you can find some answers to Will's headshaking. What an awful thing for you to have to go through.

HoC, some of the behaviours definitely make me think of neurological issues. No difference whether it's night or day though.

Jason - it sure is easy to feel for them. The next mare to foal also had complications and ended up being shipped with foal to St. Hye. Fortunately she is doing well now.

The orphan is doing very well and drinking her foal-lac like a champion (she hoovers it out of a bucket, would have nothing to do with a bottle). They have tried 2 different nurse mares and the one they got today seems to be working out great - an older Clyde mare :) Honestly, I don't even feel too sorry for her anymore - she clearly isn't feeling sorry for herself! The biggest concern right now is not turning her into a brat with all the human contact!