I've been trying to update all week but I've been super tired and have been battling sinus headaches on and off all week. I suspect it's partly due to the lovely flowers Alex gave me for our anniversary a couple weeks ago but I'm keeping them around as long as possible anyway - 5 years married, 13 together! The flowers stay.

So, the good news is Willy's back has not been reactive since last Sunday (Apr 29th) and he is completely undisturbed when I poke around. I suspect he'd been playing extra hard since he hadn't been getting the normal amount of exercise and likely torqued something back there that took a couple days to resolve.


In the meantime, we walked. A lot.
Willy is still a little rough with some winter coat in these pics.
Why does the camera add 10lbs to me and not the horse?!? 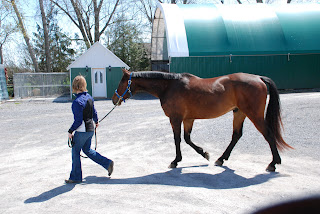 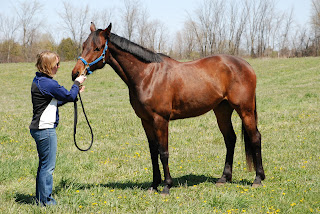 We had two good rides Monday and Tuesday. They were what I consider conditioning rides where my goal was just to make him move a lot over varied terrain and also have some fun riding outside. Willy hasn't lost any of his enthusiasm for exploring and asks to go into the trails/fields every time we pass a path leading out. It felt like "old" times for the first time in awhile.  Yes, he still did some headshaking but I've decided to basically ignore it for now since it's no worse and he doesn't seem especially bothered by it.

Thursday and Friday I asked for more - lots of transitions (within and between gait), figures, paying attention to me even with yellow school bus of doom screeching past, etc. He's been really good.

We are putting more pressure on my vet and St. Hy to get back to us with the radiologists report. It's been 26 days, which has to be considered ridiculous by anyone's standard. I just don't get it. I know my vet has been calling himself this week but I've still had no word.

I had a long talk with Willy's owners last Friday (Apr 27) night as I thought it was time to touch base on the way forward and to check in that we are on the same page. Of course, this was in the middle of his back issue and without my rides this week, so things were looking extra dire.  I am very, very fortunate to have such a good relationship with them. I can't imagine it working this well in any other situation. I've given them a heads up that I might not continue the lease past May, if the situation isn't showing any signs of improvement. They agree that makes sense and is in my best interest. We discussed many details but the basic idea is that we are putting a limit on further diagnostics because we are at the point of diminishing returns.

There are still plenty of "ifs" so I'm trying to live each day as it comes and to clear my mind of it all when I'm with Will. I've sometimes wondered if my worried/occupied thoughts about his physical state are actually making them worse. At the very least, we know they sense our tension and respond to it. So I'm trying to remember to live simply in the moment with him. Fortunately I have lots of practice at this, with all the puppy training I've done!

I've scheduled a chiropractor appointment for Monday (tomorrow), so we'll see if that leads to any new information. It's pretty much the last reasonable option I have at the moment. It's certainly not an exceptional measure and something that has a reasonable chance of helping. I'm prepared either way, at least as much as I can be.

I'm also trying another new bit. It's similar to a Happy Mouth but not quite. I was never able to find a double-jointed rubber or copper bit. Will doesn't seem to like a full copper bit anyway and I wondered if the difference I felt with the rubber (negative) was due to the rubber or to the style. I know the rubber is super gentle but I suspect that my feel and his response were better with a double jointed bit. I suspect he has a fairly small mouth internally and therefore the rubber bit takes up a lot of space. I also think (again, based on nothing better than my thoughts/feelings/observations) that this is why he was happy in the double-jointed bit for so long (it conforms better) and perhaps the single joints have been extra irritating. I don't think this is going to lead to the answer to his headshaking, but it's still worth making him comfortable otherwise. I also have a Happy Mouth on special order, just in case.

So it's chiro Monday and then the month of May to see where things stand. I'm also relieved, if not happy, to report that we discussed what would happen to Willy if I stop leasing him because his issues do not resolve and/or get worse. We agree that no matter what he will not come to poor treatment or harm and, if it came to it, we would euthanise him.

But we aren't there yet! He might just remember he's a riding pony after all ;-)  It just feels good having all our cards on the table.


More photo attempts.
Not too happy to be in a hay field without eating! 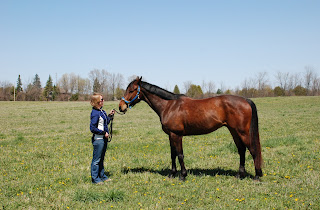 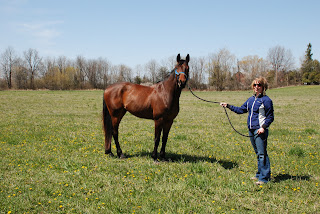 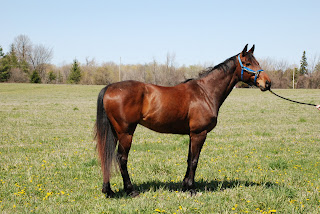 Hastily scribbled by RuckusButt at 8:38 PM

Well, a plan is a good place to start. I'm looking forward to the chiro appt. tonight as well. I hope she can give you some guidance... Do you have a way to show her the x-ray? Maybe bring a laptop to the barn or email the files to her ahead of time? (You probably already thought of that!) lol

I like the pictures - I think he looks really good. You can see some dapples coming out in his coat as well. The picture of him with his ears back made me chuckle a bit... :-)

I did think about it and I will have them on hand but honestly I don't think she'd be better than my vet at assessing them. We'll see!

Thanks for saying that! It's been a lot of work getting him looking like this :) The last little tweak to his feed the Shur Gain rep recommended made a difference too. I love the dapples, they stand out even more in person. I suspect they will be gone once he's fully shed out though.