We had a follow-up appointment with the chiropractor today. I’ve been trying to write an interim post but never quite managed to finish it, so this is a bit of everything. For simplicity I’ll add a few updates in [square brackets]. Then I need to do a garden post!!

Dr. J saw a lot of improvement today, both in his demeanor and how everything felt. She could tell that I was diligent in doing the prescribed work and seemed pleasantly surprised by just how much he’s improved. It must be an awesome thing, to help horses and people like she does.

My usual approach is to do all the soft-tissue work before I ride but not as deep or strong as I need to for full benefit. My idea with this is I want to relax the TMJ and atlas areas before I ride but I don’t want to do the deep work in case it’s still making him a bit sore. With that in mind, I work deeper after the ride and do carrot and leg stretches, followed by some hand grazing and then he’s in his stall for the night or back out until bedtime (depending on time of day). I don’t know if this approach is necessary but it makes sense to me and is working very well for us. [I described this to Dr. J and she thought it was a great approach].

Willy is one happy horse these days. He’s still playful and mischievous but he is a much more content version of himself. It’s hard to articulate. The obvious difference is he no longer constantly tosses his head while on cross-ties. Picture the sounds that head tossing would make in the ties. Now imagine that for 30+ minutes at a time. The barn is a much quieter, peaceful place! I honestly think I forgot what things were like “before” and now it seems so novel to have him standing quietly, often so relaxed he has droopy eyelids and lips. 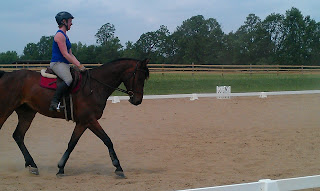 One ride, I didn’t do the muscle work before I rode. I wanted to ride with someone who was already mostly ready and it was mid-morning and I had done a full work-up the night before, so I figured it wouldn’t make much difference if I did the work after the ride. I noticed the difference right away. Although he was overall still much better than he has been for months, he did some headshaking on the crossties and a bit under saddle while walking. Considering I hadn’t seen ANY of it since our chiro appointment, except while actively working the atlas and TMJ areas, it was telling.

Last week, I didn’t go out 2 days in a row. I am there at least 5 days a week and never skip 2 days in a row except for the few times I’ve been out of town for work. This time it was because Alex was going out of town for 13 days and I decided to spend the nights with him. The difference was clear the next morning. He was still better than he was pre-chiro, on average, but he was tossin’ that noggin around a fair bit and not very relaxed. Probably akin to his “good” days during this whole ordeal. Since we were seeing the vet for vaccinations that morning, I took my time doing his muscle work and really got some good reactions from him (dropping his head, yawning)

Dr. J asked, during an email exchange last week, if she could use parts of my update email on her testimonial page. Um, hell ya! I am happy to help her spread the word about the work she does. She offers a more complete service than the status quo chiropractor around here, so I’m all for promoting her. I offered to write something specific for a testimonial, too. Laura and I laughed about what a sob story it would sound like, “I was on the verge of putting my gelding down and Jen saved his life” or some other dramatic summary. Although we laughed and I’m not the drama type, it has to be said that it’s not far off the mark.

I had been preparing myself for weeks that it was something BAD. The worst of the bad was the lack of diagnosis despite trying. We were quickly realising that reality. Chiropractic work was my last gasp. I’m SO glad I had done a ton of research on practitioners in my area prior to this AND so glad I didn’t go with the status quo chiro for our area. I suspect that particular practitioner, good as she is, would not have identified Willy’s problems. They are pretty simple but could be easily missed by someone who doesn’t look beyond the vertebrae.

My vet is one of the most respected in our area and still he missed the TMJ/atlas issues. He might have even been a causal or contributing factor.  I didn’t see anything during the float that would indicate it was poorly or harshly done, not that I’ve seen all that many.  So, I don’t really know what to think on that front. Personally, I think the vet exacerbated some pre-existing issues in both areas but he didn’t cause the scar tissue or tightness in the ligaments at Willy’s atlas/pole. Regardless, the float was obviously the tipping point.

I’m having the time of my life again, with a renewed appreciation for how awesome it is to ride through the fields or do some schooling on a happy horse. I have also gained a healthy respect for how fast things can go wrong and how deeply it affects me.
Hastily scribbled by RuckusButt at 9:00 PM

That is such good news! TMJ issues can be devastating, and you're right that most vets and many chiropractors can miss these issues - don't know why they aren't more informed. I've had very good experience with chiro, once I found a good one.

I had no idea how problematic the TMJ can be! I'd heard of it only vaguely before this. And it's so simple to work on. I think I will always do a bit of massage in that area from now on, on any horse!

I like the picture - his head and eye look pretty relaxed! I'm soooooo happy that this chiro was able to find the problem and help you both.

I cringed a little when I read about how we were joking about the testimonial...but I also chuckled a bit. Things were pretty grim there for a while and now he has done a 180 and it looks like you are good to go for a summer of riding!

Hi-popped over from Laura's blog because she said you were dealing with some TMJ problems. I was wondering if you would share the exercises your chiro prescribed?

I have 2 geldings who are experiencing some significant poll tightness problems. I have been working on deep massages, but would certainly love to learn more.

I am also scheduling floats with a different dentist this year, as I have started to wonder if the last guy messed up the grinding action and contributed to the TMJ problem. I like to think I know what I am looking at when the dentist works on my horses, but sure seem to have problems with the 2 horses he worked on last. :(

Welcome, BrownEyed Cowgirl, thanks for stopping by! I would be happy to go into more detail, I will post in detail about this tonight or tomorrow for sure. I'm sorry to hear you are dealing with some similar issues but it's definitely possible that you can help both of them.

I had a different vet do vaccinations (by chance) and I asked her to look at his teeth for me and was relived she didn't see any problems. I might get someone new next time, too.

RB; We have been out of the loop for a bit but TMJ = GOOD NEWS in our world ! Sorry for the delay in our response.