An Incredible Offer I Have to Refuse. I think.

First, I "came down" off my first horse shopping venture and realized I definitely don't want to chance the hind end on that first mare. I watched the video again after a couple days and the weirdness stood out to me afresh.

The chestnut gelding ended up being a horse I know. The current owner changed his name so I didn't put it together since there are a million chestnut geldings. As we talked, I exclaimed "I know this horse!"  Turns out he was my coach's re-sale project when I first joined my current barn 3 years ago and didn't know her all that well. Honestly, I didn't ride him all that well. I think I could learn to ride him well in a couple months but then would be ready to move on...and would then be trying to re-sell a 10-11yo TB in a super-saturated market. Even though he's well-schooled, he might be too well schooled for the novice-low intermediate rider. Horses that only have advance riders on them tend to not do as well in the masses or with riders new to him (likely why I didn't ride him well and why he was so quick in the video I linked to). The plus side is my coach now wants to buy him so that he doesn't bounce around any more.

The buckskin warmblood by Yeager was so, so cute. He was a bit of a pest with mouthiness but not too bad and owner was very forthcoming with his history. He went well w/t/c and his movement felt great. Of course he's very green but he was very sensible and I even took him for a short hack after. The owner contacted me a couple days ago because she has someone vetting him next week but she would rather he go to me. Unfortunately, I don't feel comfortable rushing my decision. 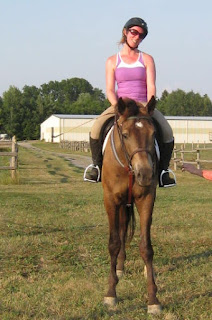 Plus my coach ("V") has made it that much harder.

The deal is, she has a few very talented young horses that she has brought along. She has sold a couple but the market is so bad right now, they aren't moving like they should. The mare in question is her favorite and she most of all wants it to have a good home. She knows what I'm like with horse care and would give me an incredible deal on her just because then she knows the mare is in good hands. Plus since she's my coach she will get to keep tabs on her and help me bring her along. She would get right of first refusal if I were to ever sell, which is not a problem for me. But she would also maintain a partial share in the horse to show jump at an international level "if you and I decide to take her there."

Obviously there are many details to be discussed. For me, issue #1 is price. While she is offering me the deal of a lifetime, the fact remains it is a LOT more than I planned to spend. I mean, who am I to own a horse like that?  While it is amazingly flattering that someone of my coach's calibre thinks enough of me to want me to be the one to get this deal - she could sell her for this amount to almost anyone, but won't - the fact remains that I earn what I earn and neither my husband or I have wealthy family backgrounds. I have made it clear that I won't over-extend myself because I never want to feel that I'm lacking in horse care because I can't afford it. We could make it work but it would be more stressful than what I had in mind.

Aside from the cost issue, there is the issue of simply wanting a horse to love and enjoy, not a business venture. I have no interest in being a passive owner of a horse the trainer shows. Here again, V says that's exactly why she is offering me this opportunity. I know there are a lot of shady people who would do this for their own gain. I don't belive V is one of those. I've known her for years and there is a reason I finally broke with my other coach to ride with her.

I'm trying this mare and a couple others tomorrow. I expect we will answer some of my questions and work out details then. I'm glad my husband wants to come see her too because buying a horse, any horse, is a household venture, this prospect even more so. I really don't see it happening but I can't help but be a little excited at the prospect!

Hastily scribbled by RuckusButt at 12:47 AM

Can you try the buckskin again? Or you just don't want to decide that quickly...

Ooh - the prospects from your coach sound really interesting. I'm looking forward to hearing some in-person details there!

I get you on the first mare - she had a nice temperament, but why risk the back end if there are other options out there..?

The buckskin looks cute and I could see you enjoying bringing him along.

Funny that you are looking at 17hh+ horse and I can barely get my legs on anything over 15hh. lol

Mostly I didn't want to decide too quickly. She couldn't turn down a potential sale and I wasn't ready to have my vet out to beat the other person's vet!

Truthfully, I find 17hh a bit tall. Although it felt fine being on him, I think I would still prefer 16.3 and under.