I am not doing a year in review post. First, I didn't blog very much and what I did blog wasn't exactly the kind of stuff I want to be filling my head with right now. It can basically be summed up by months of trying to figure out what was wrong with Willy, followed by months of horse shopping. I found my dream horse in November, so I would rather focus on the good things to come.

My goals are also going to be fairly loosely-defined. January is going to be a very hectic month with starting another round of French courses, Alex traveling, a major final project at work, and then starting a new job. So basically my goal for January is to survive!

My horse is just coming four, so my goals for him are simply to work with my coach to start filling in some of the gaps in his training and solidifying his basics (a lifelong project, I know). My view is that I have all the time in the world to develop him but, at the same time, I believe a consistent training schedule is best especially at his age and if you want to show. The idea is low intensity but consistent and structured. I have a lot I want to work on in my own riding too, so I'm looking into picking up a couple of lessons with someone who has a schoolmaster type horse. It will probably be a dressage focus, which is pretty much perfect for what I feel I'm lacking at the moment.

This will not get or keep me fit, so I need to develop a plan for exercise because I’ve been too idle for too long. When I was conditioning Willy and I lost 12lbs, I felt better than I had in a very long time and I want that feeling back. It will improve my riding too, of course, but I am most looking forward to the energy, better sleep, and stress-reduction.


In the spring, I plan to slowly build up Armani’s conditioning with some longer rides over varied terrain.  He’s not in terrible shape but I wouldn’t call him fit, either. While I prefer where he is to being over-worked, he would find a lot of our under-saddle work easier if he were in better shape.  A fit horse is also more likely to stay sound and less likely to have other issues, like back pain. Obviously the work we’re doing now will help but it’s not the same as getting outside! I figure by the time the ground is good for riding, he will be more than ready to step it up a little. The best part is that it’ll give us both a break from schooling and will help put general miles and experience on him outside of an arena.

I am going to show this year if it’s the last thing I do!  I might have to trot over every freaking 18” fence but I am going to a show.

Now, because y’all were so demanding, I give you pictures!!

New Year’s Day was bright and beautiful. It was a little chilly but there was no wind. Alex said he wanted to come to the barn with me…an idea was brewing in my head. As we pulled onto the road to the barn, I mentioned that I was thinking of riding outside since I had him on the ground in case something happened. As we approached the barn, I saw another boarder riding through the snow at the front of the property. That did it!

My friend was there, just finishing morning chores, and I recruited her to join me for a ride through the snow.

This. This is what it’s all about.

When we first "broke trail" he stared
at the snow and pawed a bit. 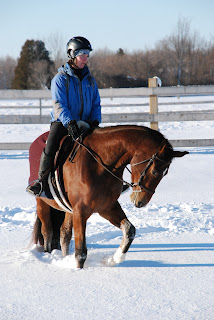 It felt like riding a super fancy dressage horse!
It was a difficult trot to post, being so big,
my friend and I both gave up trying eventually. 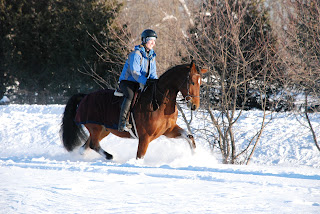 Armani wanted to run so bad, so after a few rounds when we had a good track, I let him go. 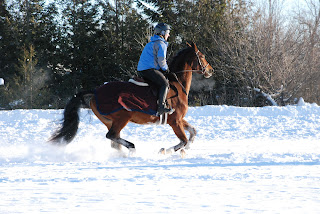 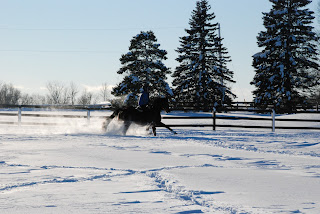 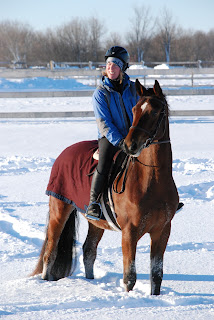 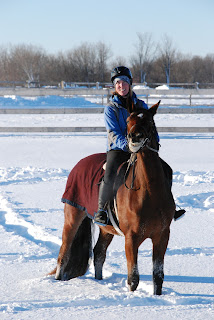 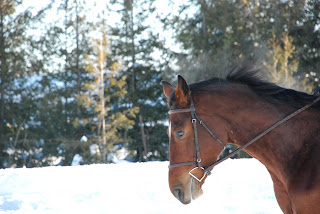 Heading for home, nice and relaxed. 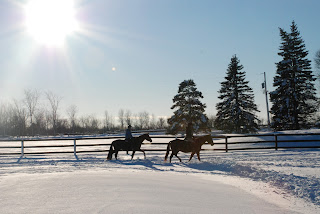 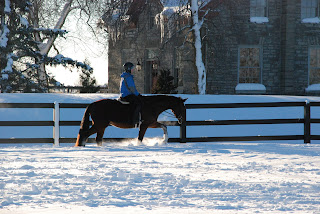 Happy New Year everyone! May 2013 be your best yet.
Hastily scribbled by RuckusButt at 7:42 AM

January sounds like it will be a tad busy...lol Hopefully everything goes smoothly.

Love the pics!! Great that Alex came out to get some photos of you guys. The footing in the snow has been pretty good so far, so it was nice that you got out to enjoy it.

He looks like such a good egg, you have to be so thrilled!!

He's great and it's sometimes hard to believe he's mine, even though it mostly feels very normal. He still has plenty of baby stuff going on and we have lots of work to do but it's a rewarding process, albeit rather challenging!