Boot Camp and the "S" Word.

I had surgery yesterday so I won't be back in the saddle for at least 5 days. Armani has been going very well though and I feel like I'm becoming more effective with each ride. Mostly it's because I am applying what my coach V is telling me with more consistency and confidence, so I don't lose her schooling as quickly throughout the week.

I told V on Saturday that she makes my horse so fun to ride. Although I tried to avoid buying a baby, one clear advantage is you have a pretty clean slate to work with. Of course the other benefit is I could afford a fancier 3 year old than a more finished 6-10 year old horse. Yes, the money still gets put into the horse in the form of training but at least then it's training of my choice. But I digress.

So Mr. Manners is in bootcamp with my coach this week, so to speak. I'm not able to ride but I didn't want him to have the whole week off, plus it was a great opportunity to get some focused training rides on him.

Oh, and V mentioned the S word. Not just in the general sense as in "at our first show...blah, blah" but in the "I think you should enter the show on April 27th. End of APRIL?? We still have 4 feet of snow on the ground! I don't see how there is any way the grounds will be in good enough condition but I guess we'll see.

My immediate reaction was to think there is no way we will be ready. V promptly dismissed this thought by reminding me this is about giving Armani good experiences, getting me to my first show in 20+ years, and just giving him a good ride. While I completely agree with all of this, I also couldn't help but think surely that could happen closer to the end of May instead! She also mentioned I should show in equitation, which made me literally laugh out loud. But I was flattered because V has excellent equitation (think Mclain Ward) and was fairly accomplished in jumper eq and she wouldn't suggest it if she thought I didn't have good equitation. We'll see how that goes!

Also, my new juicer is coming in handy since I haven't been able to eat very much. This is going to be awesome with all the fresh produce soon (?) to come out of the garden. 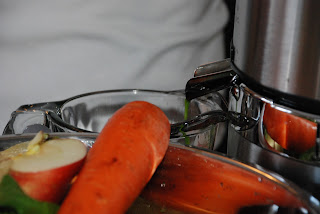 Hastily scribbled by RuckusButt at 10:42 AM

I agree with V, as long as you go to the show with the right set of goals you can get a lot out of it. I think the sooner a horse starts being exposed to the horse show environment the better. In fact I have often taken my babies to shows to just hack around and hang out but not actually show.

I absolutely agree, I'm just nervous for myself. Armani has more show experience than I do since he attended 4 shows late last season in the hack division.

We did the same thing with Willie a couple years ago - brought him to the show grounds and just walked him around.

It's all about good experiences. But as an adult who isn't show-saavy, I struggle with wondering how I'm going to control my nerves so Mani doesn't pick up on it!

Hope you recover from your surgery ok! The fresh juice sounds good!

It's great to hear that you are doing so well with Mani. Why not try a show in a month? ;-) If your coach thinks you can do it you'll be ok.

I hear you on the nerves from not being at a show in 20+ years though. Luckily my first one isn't until mid-June!!! :-)

Good luck with your recovery. Hope you are up and riding soon. What great progress you are making with your new boy. Well done you!

Thank you for the kind comment on my blog about Zoe.