If you are showing and, say, over the age of 14ish, the inevitable question becomes what to do with the ribbons. You can't just throw them out, can you? After all, even if I only enter one division (4 classes) and place in every class, I've probably "paid" about $100 per ribbon ;-) if you total coaching at the show, trailering, braiding, and show fees. And that is a conservative amount, depending on your level.  Not that you should total it that way...but it is one metric ;-)

Yet I also can't (and don't want to) put them on my bedroom wall like I did as a child.

I envy those with a barn of their own to put them in, like Littlekeebler: 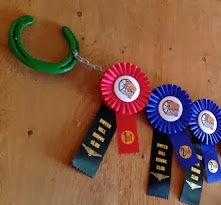 It seems so appropriate and not cheesy at all in that context!

My ribbons collected with each show and I did display them on my locker in the tack room for a few days after each show but then they came home and sat on top of my wardrobe of riding clothes...in the basement.

Ok, so my basement is nicely finished and my riding wardrobe area is not exactly basemet-like. Still, they sat up there, on top of the wardrobe, unseen.

I had idly mentioned to my husband that I should do something with those ribbons but didn't know what, since it seemed superficial and juvenile. He agreed that I couldn't just dispose of them and we mentioned some possibilities but it was extremely non-commital as we were doing other things at the time.

And then one day I came home from the barn, brought my stuff downstairs, and saw this: 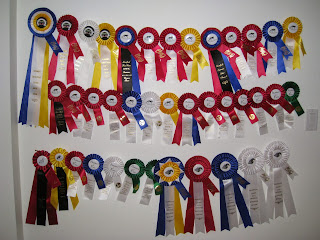 Doing laundry is just a little sweeter now that I get a reminder of what a great season we had in educating both Armani and me to the show world. We realized success that I never thought I would be capable of - we finished the season as Reserve Champion Green Hunters (7 shows) and fourth in the Hack Division with only 3 shows entered in that division. I will remind my American friends that in Canada red is 1st place.

In the Greens we were beat by a 10 year old school horse and they happened to attend a few shows that had a ton of entries (hence more points) that we did not attend. I will come second to that combo of experience from horse and rider any day. The fact my 4 yr old with me as his rider who hasn't shown since a child and never in hunters, did so well is amazing to me. He is number one no matter what as far as I'm concerned. What a horse.

On another note, now that I've seen this, I think one of my h/j pet peeves might be tiny ribbons by some shows and huge ribbons by others. While I love the massive ribbons and "hate" the tiny ones (really, most of those champion ribbons don't look like anything much especially when they use black!), I would be happier if they were at least consistent.

Told you it was a shallow post! Heehee.
Hastily scribbled by RuckusButt at 9:48 PM

Your husband is so sweet! Those are beautiful ribbons and a good spot for them :)

That display looks great! You did get a nice collection this summer. Congrats on the res.champ!!

I agree with you on the tiny ribbons - the DHRC ones are tiny. I might actually donate a few back to the club next year - they use the same style each year, or so it seems. I'm hoping to add a few to my collection from some different shows next year though. ;-)

And I seriously think some of my ribbon 'ho tendencies come from childhood - I won a few as a kid, but didn't really have the opportunity to do much...blah blah. I'm sure a therapist would have a ball with me! ;-)

Laura, it's probably healthier blaming childhood lack of ribbons for the ribbon 'ho tendancies but I doubt it'll fly with this crowd. Seems there is an open acceptance of ribbon love among us adult amateurs. I'm not feeling apologetic about coveting them anymore!

Fuck therapists, we have horses!

Laura, you can bitch about me to your therapist, haha!! As an adult I have kept virtually none of my ribbons. I had such a massive collection from my junior days that it seemed kind of pointless to keep adding to them.

I will admit that since I haven't shown in a few years that now I kinda wish I had kept some of them, especially the zone and year end ribbons.

RB that is a ribbon collection to be proud of! And I do agree that some of those ribbons are ridiculously tiny. My inner ribbon 'ho says "that's what those show organizers call a PRIZE?!"

If I had that many, Melissa, I guess they'd be disposable to me too. But that will probably never happen! I suppose I can do a 3-year rule or something.

Just found your blog and I LOVE ribbons (I guess i"m shallow or I love shiny things don't know.) but I like your ribbons so interesting! I'm going to get my ribbons made into a quilt one day :)