We have a new foster puppy who will be with us for the next 3 to 4 weeks. I got the call asking if we could take her yesterday morning and we picked her up in the evening.

This is Mattie. She is very
happy in her crate. 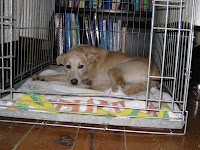 She is a four-month old lab cross...I was thinking Greyhound yesterday and after watching her run off leash today I am quite positive I'm right on that. Mattie is an extremely timid dog and is in serious need of socialization. Hazel is the right dog for the job on the canine front and since we don't have children it's a good environment to slowly ease her into normal noises etc. She has been extremely quiet so far and barely shows interest in Tonka (cat). Tonka actually approached her right away and gave her a good sniffing-over so he must have sensed that she was no threat.

When we first brought her home, she was terrified of pretty much everything. She would look at the wall as if trying to figure out how to disappear into it. It was very, very sad to see. I've never seen a dog try to make itself so tiny.

She figured out she could wedge
herself between Hazel on her bed
and my little laptop table. 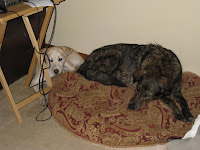 Today Mattie was starting to relax a fair bit. I let her run off leash during the evening walk and after the first few minutes she really started to enjoy herself. The tail started coming up, she was sniffing around and following Hazel's every move. She is very clumsy! She bombed through the bush without much regard for branches and tripped a fair bit. She also doesn't watch where she's going and often stops by running into Hazel's butt. Well, Hazel's butt IS where all the Ruckus happens, after all, hee hee. I will have to get some video of her running to show the racing dog gait.

Here she is, starting to relax
and enjoy herself outside. 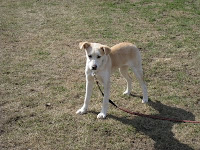 Hastily scribbled by RuckusButt at 8:15 PM

What a super cute addition to the family!
Yes, a video please!!!

She really is adorable! It is so bitter-sweet, fostering dogs. I was so heartbroken when it was time for the last dog to go back for adoption. On the other hand, she was adopted within 3 days to a really good home, so it's worth it.

I suspect it will be the same with Matty. I WILL cry. I WILL look for her everywhere. And that's ok, it's not about me, really.

I'll try to get video soon!

You get then during the best time, puppydom!! Our blueheeler was super shy (is still a teeny bit reserved around strange dogs/people) and she hid so far under the back seat in our truck, we couldn't see her! She hid behind a took box type thing (where the tire jack was) that hubby and I both had to reach from each side to feel her. It was the stranges thing ever. A dog who doesn't like car rides. She still doesn't. You are brave, I don't think I could foster. I'd have a 100 dogs!