I can't really think of a good internet name for my leased horse, so I'm going to call him Brumby on here...he looks about as far from  an Australian Brumby while still being a horse as it gets. But he may act like one. I was going to ask the owner how she feels about me blogging about him...but honestly, it feels weird, so I'll wait until we know each other better.

I had my first real ride (second actual ride) on Brumby Friday evening. It went well. I obviously still need to get used to him before I feel like I'm riding him well. His shape is very different from what I'm used to and I can feel the muscle memory is just not there like it is on my usual mount. I find it okay going down in size, but going up - especially width, is harder. Suddenly, I feel like I'm pinching with my knees. Overall, the ride was pretty good and I got a sense of just how nice he will be to ride once we find our groove.  Some really amazing canter. We took it really easy since he had only been to his new barn for 4 days. I felt good.

Sunday was my next ride. I decided to ride outside since the weather was not too bad. I thought it would give him a chance to look around areas he probably hadn't been yet. I was in the mood for an easy hack.  There is a nicely groomed 1/2 mile track so it was perfect for my goals for the day.

I expected Brumby to be very interested in his surroundings, since it was all new to him. He was actually very spooky at a few points. I tried to just keep him moving while also letting him look around a little.  Once, he grew roots at one of the 2 scary spots. Since he was already stopped I let him look around while I made sure to relax even more. I asked for forward and got it, although tentatively.  After several steps he spooked again and reared. I'm not talking a little hop, I could see my brand new polo wraps at eye level! Pretty :-/

I brought him down like I've read about 100 times but never had to do. All is well and somehow we are walking forward again. I thought perhaps I pulled on his mouth when he spooked, thereby encouraging a rear. I really didn't think so but was willing to give the horse the benefit of the doubt at first. Then it happened again. This time, I was SURE I didn't pull. I brought him down again. I wasn't really sure how to balance not letting him get away with this behaviour with not being in danger. This was my third time on his back and I didn't want to push him too much in case he really exploded.

I stayed calm throughout, that is one thing I know I'm good at, but disappointment was in the background. We did some nice forward trot and transitions to more collected trot, walk and halt. Mostly okay.  I finished the ride on a good note. As soon as I untacked, I hand-walked him to the "spooky spots" and gave him some carrot pieces when he relaxed.

Perhaps I should have hand-walked before riding? I thought I was taking it pretty easy on him while also trying to just get forward movement. I spoke to the owner and she didn't seem to think it was weird, she said she wasn't surprised. Um, I was!! This is what worries me most of all. Combined with his poor ground manners, I think this horse is spoiled.

I am fine with a challenge but I'm not dealing with a rearing habit (I would if it were my own horse but not if I'm paying to ride it!!). I felt secure the whole time and was not afraid. Although I did kinda say "Wholy shit" to myself on the way home, lol. We'll see how it goes.

I hope to get new pictures soon. This is from the test ride. 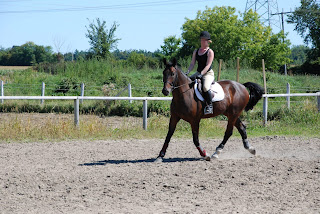 Hastily scribbled by RuckusButt at 9:46 PM

Crap! That sucks. I'd be worried too if the owner wasnt shocked by his rearing...makes you wonder?

It's probably his way of saying he doesn't want to/fears going forward - you apply energy from behind and he takes the energy up instead of forward. My mare Maisie used to do this. We nipped it in the bud - don't know if what we did will help you. Every time she started to feel "sticky", instead of pushing her forward I would turn to the side, and then to the other side - sometimes it would almost be a zigzag in place. But no leg or forward aids, just directing the head, making sure that she never felt "trapped" by tight reins. She had the choice of doing that forever, or moving forward. Forward would win, eventually at first and quicker and quicker as time goes on. Of course I also had to be careful not to overface her. I'm a big fan of keeping the feet moving when a horse wants to get stuck, but not simply pushing the horse into the "stuckness" with forward aids - that's when you'll get a rear.

But be careful - rearing can be very dangerous - and can also be caused by pain issues - saddle fit, chiro, bitting etc. Good luck!

He was probably just uncertain of his new surroundings. I will say though that rearing is something that I don't take lightly or let go unreprimanded. It is WAY too dangerous of a behavior. If I had a crop he would have gotten a smack on the poll pretty firm the 2nd time he went up. Probably not the first time because I simply would not have been expecting it.

I agree with Kate's suggestions as well, I would also try to keep the horse's feet moving if I could, either forward or side to side without tight reins. But I personally would never let it go without a reprimand. I will say it is way too dangerous of a behavior to just ignore and try to aviod again, but that is my opinion. If one of my horses reared, either on the ground or under saddle, it would be a bad day for them.

If the owner wasn't suprised you may be right and he is spoiled and this is not the first time. Or he could have pain, but just from the circumstances with hacking him in a new place it may just be spoiled horse not getting his way. Maybe some ground driving would be a good idea to get him used to new areas of the facility? Sounds like you handled it well but obviously you want to avoid that again if you can!

Great comments and you are all letting me know I was on the right track. The 1st time was really an all-in-one motion of spook and go up so I wasn't pushing forward more than you would be at a walk, so not much at all.

After that, I did a variation of what Kate suggested any time he got sticky - i.e., turning sideways, tried to zig-zag, and super light contact on one rein at a time. I probably am guilty of too much forward aid though. We made progress and I got him past both scary spots several times without major incident, so it was not a complete failure.

I also agree it could be residual issues from long-term use of the ill-fitting saddle. Although he is much better now with the new saddle, I have a feeling this might be part of the behaviour.

Melissa - my one regret is that I didn't reprimand him enough. I knew it at the time even! Being my third ride on him, I was worried about having an even bigger explosion. The only solution I could think was to be persistent and not let him get his way.

I still believe it's a hard balance since I think the real issue is a combination of new environment and old saddle fit issues. It doesn't seem fully fair to punish that, you know what I mean?

That being said, I fully expect him to never, ever do that again. And if he does, he'll learn that I am more scary than the horse-eating bushes.

Don't make excuses, and don't take it lightly, RB.
He might have been insecure or whatever, but there are many ways a horse can protest and to me it sounds as if he needed very little excuse to rear.
If you go on riding him, there will be moments where you have to ask him to work.
What will happen then?

And from the reaction of his owner it seems as if it was not a single episode.

Personally I would look around for another horse.
There are so many horses in the world. Don't risk your health over this one.
Rearing is a nasty habit.

I'm not making excuses, just trying to understand the cause. I had worked him on two previous occasions without incident. The owner's attitude (or my interpretation of it) is actually what concerns me most.

Don't get me wrong, I am not under-estimating the seriousness of this. A blog entry is not life and not every element gets recorded. The next day I told my instructor flat out that if it happens again I'm done with him.

I just got back from the barn and had a nice ride. No problems, although I still don't like his ground manners much. I'm tired and off to bed.

Sorry RB, I was also tired yesterday when posting.
I just got worried when I read your post.
I have seen some accidents over the years, but the two worst ones involved rearing horses, so maybe I am a bit oversensitive.
Please take care, that's what I wanted to say.

HoC - I know, no worries. I appreciate your concern and didn't mean to suggest otherwise. I think it's pretty neat that someone I've never met cares enough to warn me :) For all you know, I could have more bravery than brains...we've all seen plenty of that, I think. And I DID just turn 31 this week so I've still got a lot to learn about mortality ;)

I fully agree that it's just not worth the risk. It's not my horse and I feel no obligation or desire to work with a horse that rears. I just felt this was worth sticking out long enough to see if it's situational. My instructor already has another horse in mind for me, if this doesn't work out.

Oh goodness RuckusButt. This is troubling. Sounds like you know what you are doing, but I'm glad you are ready to send him back to his owner if the rearing continues. You shouldn't be paying the owner to fix her problem horse - she should be paying you! If his ground manners are bad, maybe it would help to spend some time just with ground training before riding again. I think you mentioned that. Good luck, be careful, and don't hesitate to walk away from this one. He's shown you he can buck and rear. 2 red flags. I'm sorry.