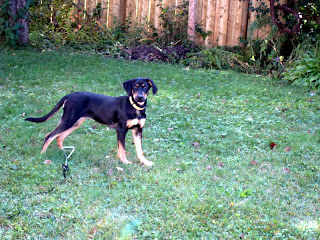 Since she was a stray and didn't respond at all to the name the shelter staff gave her, we were told we could re-name her if we wanted. My husband, being a geologist, was throwing out various rock and mineral names. While "Trondjhemite" is unique, it doesn't exactly roll off the tongue, lol. Besides, you just KNOW that it would be shortened to Mite. No thanks.

Then he said "Ruby" and the little pup tilted her head a little. Not so much that I think she was named that before or anything, but she liked the sound of the word. That's good enough for me! Well, almost. I have named her "Ruby Tuesday" after the Rolling Stones song and of course we call her Ruby mostly. In 24 hrs she already responds to it well and we don't even use it very much.

Ruby is probably a Doberman mix but I think it's entirely possible that she is a black and tan coonhound mix, especially given her size. She is only 4-5 months and her paws are twice the size of Hazel's. So far, she is very sweet and learns extremely fast. She is eager to please and likes treats but isn't so food-motivated that she's nuts about it.  Overall, I think she has a very calm demeanor wrapped in puppy energy. Reminds me a lot of Hazel at that age, actually. 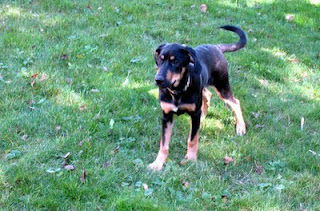 It's fall and all Hazel cares about are the squirrels and

rabbits that are everywhere preparing for winter.

Ruby is trying to decide if it's safe to go for the ball, I think. 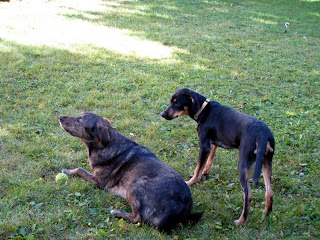 She is really cute!

Ruby is adorable and Hazel looks like a sweetheart. Cute how Ruby is looking to Hazel for approval to go after the ball.

She is very cute, and sounds sensible too.
I really loved your last picture where she is casually looking for the ball.