I used to be a pretty avid baker even though I don't have much of a sweet tooth myself. These days, with fewer people around to feed the results to, I don't bake that often.  It has to be something that really speaks to me. The rum raisin apple cake posted on alpineberry seemed like just the kind of thing I would love and actually eat more than one piece of.

It's not the greatest picture 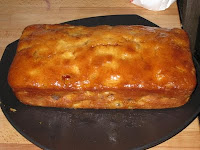 This recipe is very simple and the cake comes together quickly. I would recommend making it exactly as written on that blog. I did, however, make two modifications you may or may not consider. First, the original recipe says to boil the raisins in water first, then pour rum over the warm raisins. Instead, I put the rum and raisins in a small bowl and microwaved for about 40 seconds.  Then I let them rest while getting everything else together.  The raisins plumped up and absorbed almost all of the rum. It is possible the cake would have been even more moist if I had followed the first steps as indicated.

Second, I didn't have apricot preserves so I used homemade Gooseberry jam instead (I strained out the whole berries). I think you could use just about any jam/preserves successfully. An excellent and easy recipe.

I first discovered the alpineberry blog when looking for the "right" lemon square recipe. I read the description Mary gave and knew I found it. I was right!
Hastily scribbled by RuckusButt at 9:40 PM

Lol, I do have a weakness for hard candy. My real weaknesses are in the savory world, which can be just as dangerous!

Mmmm, looks delicious! I love apple cakes. This one sounds more yummy than most...