Progress: In riding and living.

It has been a glorious weekend! I’m not sure why but no one in my family organized an Easter dinner this year. I didn't since we had everyone over for Thanksgiving and Christmas. With everything that has happened since then, I just wasn’t up for hosting. Well, neither was anyone else, which was just perfect because it meant we got a of stuff done around the house. I mean that literally since most of it was outside.
Riding
First, and most importantly, Brumby is back in work full-force. We seem to be progressing even faster than before, almost like the time off was good for either one or both of us. My two recurrent issues are the lack of good canter-to-trot transitions and Brumby curling in when first asking for a canter. I am so thrilled that in the last week I seem to have made some real progress on both these issues. For the curling, I have been focusing on driving him forward for those first few canter strides, really getting him between my leg and hand. I can worry about the pace and rhythm later. That, so far, has seemed to really help and my instructor agrees it’s much better. He will still curl, especially to the left, but by the second or third stride he is nicely vertical. I will also assist this with raised hands but it’s hard to describe when and how, it’s a ‘feel’ thing for me at this point.

With the down transitions from canter to trot, where I was occasionally having issues, I realized I am not relaxed enough in my seat (still!) for my seat signals to be clear.  I haven’t felt tense in my seat but I think I have been and that is why it’s unclear to Brumby when I ask for the down transition. The major “reason” for this is he is a huge, powerful warmblood and it is simply harder to stay with him than other horses. This results in me being more tense in my seat to stay with him than I intend to be. It’s funny because I actually don’t need to do it to stay with him, it just happens unless I pay attention to relaxing my seat. It doesn’t help if my back is sore, of course. Once I am cantering with a truly following seat I can ask for the down transition and get it almost right away with just my seat. This is a HUGE breakthrough for me.


I need new riding pictures
but until then, Brumby says “Hi” 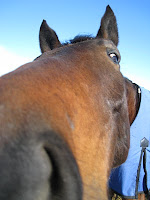 Garden/house work
I’m thinking this blog might turn into “food, life, garden” for a few months. But then I guess that is still just food and life…
My husband also worked hard to build a new foundation for our backyard shed and move it about 5 feet from it’s previous location. You may remember that I painted it last fall. Well, I finally finished the sides you couldn’t see and gave it a second coat of red, too. Much better! The base was new, so we had to paint that also.
Demolition of the original, rotten, base. 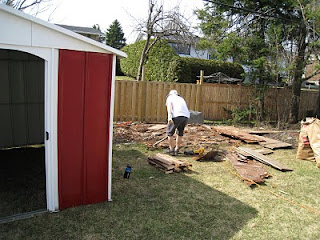 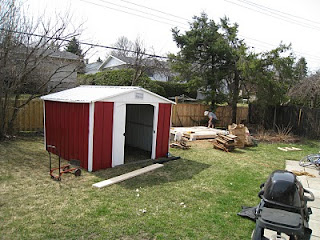 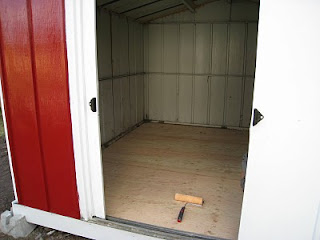 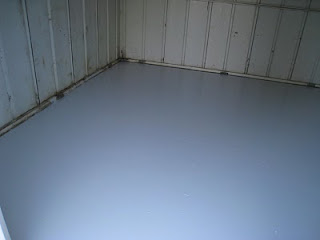 Meanwhile, I built the first of the raised beds for our vegetable garden! We moved into this house in mid-July last year, so there was not enough time for a vegetable garden. Well, this year we are changing all that! More on this to come.
Hastily scribbled by RuckusButt at 10:15 PM

Amazing how time off seems to solve so many problems isn't it? I always worry about but 99% of theh time both the horse(s) and myself come back to work better than ever. Sounds like you are getting a handle on the curling and the transitions. It also sounds like it can partly be a strength issue for Brumby as well. The first few strides after any transition are the hardest for the horse as they have to establish a new gait and rhythm. So you might be doing more right than you realize, and Brumby is doing his best to fulfill the requests to the best of his ability. They'll keep getting better! My canter-trot transitions on Sky have come a long way but the first 2-3 strides are not exactly beautiful at this point! Given that when I bought her literally the first 15-20 strides from a canter-trot were with hollowed back and lifted head she has come a long way. Of course I want perfect, not just to come a long way . . . !

Sounds like good progress all around. Something that sometimes helps me in transitions is thinking the new rhythm as/before I ask for it - sometimes all that is needed is to think it and the horse just does it!

Melissa, you are totally right, it is also a strength issue. There are so many elements to just about every problem that I inevitably only mention a couple in my post. It's a lot, really - unlearning previous behaviour, developing the right muscles, me correcting him appropriately and/or giving him the opportunity to hit his stride (pun intended!), having the right amount of contact and softness at the right times... It all plays a role in one seemingly tiny issue, no wonder its hard!

I'm not sure when it happened but I'm a perfectionist in my riding too. Maybe because I know I can never actually be perfect. My instructor thinks I'm too hard on myself sometimes but I figure as long as it motivates me and doesn't discourage me very often, then it's ok.

Kate- this works for me in every other transition except canter to trot. I will pay extra attention to focusing on the new rhythm and see if that helps. I'm sure it will help once I stop blocking with my seat, lol.

Oh, and the font wasn't purposely super large! I copy and pasted from a Word doc and that's how it publilshed!