Webster's dictionary has this to say about lameness:

Lame. 1 a : having a body part and especially a limb so disabled as to impair freedom of movement b : marked by stiffness and soreness
...or...
4 a : inferior b : contemptible, nasty

Both of these definitions are relevant to my life at the moment. Brumby is lame again and I feel completely lame (i.e., inferior) as a rider and just in general. I was working through some thoughts from my last riding post and was seeing where the improvements were going. I admit, things have not been going well and I've been debating all weekend whether to stop my lease. I am just getting tired of the up and down roller-coaster ride this horse is. Just when I post about making progress, we are back to curling in worse than ever and a canter that is like riding a freight train. For no apparent reason. On the other hand, I hear his owner is having a lot of success jumping him and they are doing very well. I just don't know whether that makes me hopeful, or more discouraged than ever. Actually, I do. It makes me feel really, really bad. There. I said it.

So I was going to wait until after my lesson today to post about the last little while. I didn' t want to post all these problems if it was really just a couple bad rides, you know? Then yesterday I got a message from Brumby's owner that he had lost a shoe and the clamp dug into the outside of his hoof but not deep and he was fine. She had her lesson on him yesterday with no problem, apparently.

Today when bringing him in from turnout, I could tell he wasn't walking completely normally. I wasn't very surprised since he just lost a shoe and I hoped that he was just a little short on uneven ground. Unfortunately, he was not sound at the trot. I had half a hope he would get better with extended warm-up, I knew it wasn't likely to help but my instructor was on her way so I figured I might as well get eyes on the ground confirmation.

So now I'm back to the place I was in during the winter - contemplating whether I want to continue this lease but now that the horse is lame I'm kinda stuck with him because otherwise I look like a jerk.

On a more postitive note, some progress was made in the garden.

We have some neat tulips in bloom. 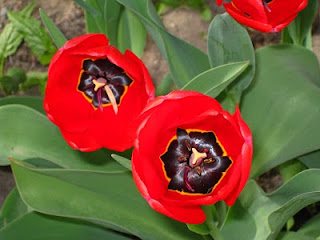 I rubbed linseed oil into the wood for my vegetable beds and we set them down over the areas my husband cleared. 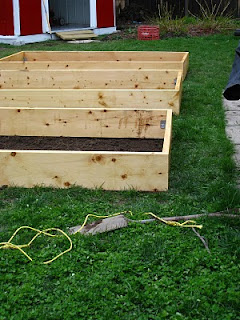 I couldn't stand the wonky angles of the beds, so I made Sasha help me straighten them. I hated to mention it, he had done so much work already...but it turns out he knew I would want them straightened.

I guess he knows me well, and so he should! This weekend marks our 3rd wedding anniversary and our 11th year together! I guess if he didn't know and love my crazy aspects we wouldn't have made it this long. 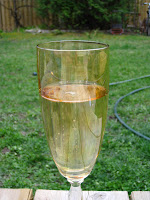 There was a little champagne flowing today
and I admit it went straight to my head! Oops :)


So we moved the beds ever so slightly so the tops would align a little better. It's so nice to have someone who understands your quirks, even though I still think it's probably silly of me to care about a slight difference either way.

But see, I don't need it to be perfect.
They are still a little off, lol! 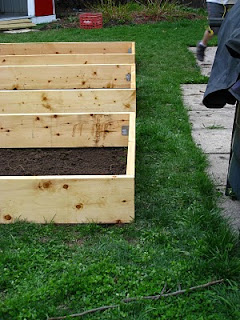 Then, of course, they just looked too fun. So I made use of them to jump Hazel! Probably not a good idea considering our veggies are going in there soon!
Check out the bounces! The video might
appear black, just click the play button.

Hastily scribbled by RuckusButt at 7:50 PM

Sounds like you're having some of the same issues I've been having. I've discovered it's not about the head, or neck, or any of the parts in front of my leg - it's about the hindquarters. I need to keep my horse in front of my leg, and if I do, the hindquarters engage and she's no longer doing the curl up or leaning on my hands. Hope you can solve your issues - do you have someone to look at what you're doing and offer useful advice?

I don't know much leasing horses. I have only leased one horse and it was through my instructor. I do know though how not having good rides on a horse can sometimes make you feel rotten especially when others may have more success. Maybe it is just a funk. Hopefully your next lesson will illuminate things for you. I know from personal experience that I just don't mix well with every horse. Bottom line though if you are not having fun and not feeling like you are learning then maybe another horse would be better for you? I don't think it is a "jerk" thing to do. :)
Another note. Your dog is so cute. I see agility talent! I have been having fun with my dog taking agility classes.

I give Hazel a 10 for planter bed jumping. How cute!

Sorry that things are discouraging with Brumby. If I were in your shoes, I'd be considering dropping the lease too. I do hope his lameness issues aren't chronic.

I am sorry, RB.
I did not quite get if he was lame when missing one shoe, or whether the shoe was replaced and he still was unsound?

I believe there are ups and downs with every horse. And health issues. Maybe it's more a question of how happy we are with the horse in general?
Go with your gut feeling.

Re. your comment about how he's working with the owner.
If the owner (or previous owners) have been using a sharper bit when jumping he might have problems to take a correct contact in the dressage work, even if the jumping is going "well". Just a thought.

Kate - I hear you! It's what I've been saying needs to happen all along. I plan on discussing this again in a post as soon as I can. I have my instructor once a week but no riding buddies, sadly.

Golden - It could just be a funk, for sure, I just find it really hard to deal with the constant ups and downs. It's like riding a different horse every time.

Yeah, it's sometimes hard to know that it's going better for his owner, that was just my honest feeling. At the same time, she has been riding him for about 4 years, compared to the 6 months I've been leasing him (with almost 2 months off in the middle), so it's natural she is progressing faster. I also think we don't "click" well, overall.

Thanks Once Upon! Isn't she the cutest dog? Unfortunately she is having some very uncharacteristic issues this week, hopefully just temporary! And thanks for the support about my lease. I wish I had enough time without soundness issues to make an informed decision!

Brumby has very nice hooves. I don't think the lameness is chronic in the sense of an underlying issue. Just a string of bad luck, I hope.

HoC - thanks. He has lost shoes before and been perfectly sound. This time he was quite lame. I am fairly sure it is simply because day 1, he lost a shoe in a "messy" way. Day 2, he had a fairly tough jumping lesson. Day 3, I show up for my lesson and he's off. So not too surprising, just very disappointing.

You are, of course, right about the ups and downs. I'm good with that (I think!). After 6 months lease with 2 months off, I don't think I have my head in the clouds. But if he had been sound the whole time, I probably would have canceled the lease long ago. Or felt a lot better about things, instead of having ups and downs like in the beginning. I can't do anything while he's off because that's not fair to his owner.

His owner and I use the same bit, a D-ring snaffle. It was a good thought. I am still testing things out - your last comment actually seems to be helping me a lot - I hope to provide details this weekend.

I just re-read that last part and it sounds cold - I don't mean it that way, I just need to get off to bed ;)