Back to the Garden.

It's time to talk about life. Garden life!  Our garden is going strong, most things have been in the ground for at least two weeks, the seeds were put in several weeks ago. I've also been planting a fair number of flowers. Many of them were ordered in the dead of winter and I'd half forgotten about them. I also ordered some transplants and they arrived several weeks ago. It makes for a pleasant surprise when you get home to a box labeled "live plants - open immediately" hee hee. I've had 5 of those in the last few weeks.

I tested both the native soil and the garden soil we ordered for pH, nitrogen, potassium, and phosphorus. The results were pretty good. Unfortunately I left the final reading on the purchased soil to my husband so that I could get to the barn instead of waiting for the soil to settle out of the water. He accidentally over-wrote the new soil results where I had the native soil results recorded. In any case, I know the new soil has a surplus of potassium and is slightly deficient in nitrogen. One of these days I'll retest.

Now, the list!
I lost track of how many plants of each variety were planted since many of the decisions were made last minute based on plant health. I try to be a good record keeper but don't always succeed!


Peppers
-2 large varieties, one globe, one long type that is early maturing
- several hot varieties: jalapeno, cherry bomb, and a really neat type called "burning ember". They have purple leaves and the peppers are purple and mature red.


**You click on the pictures for better, larger versions.** 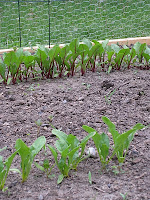 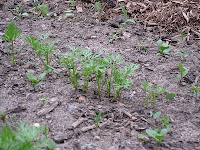 Swiss Chard - kaleidescope (multi-coloured)
Cucumber - small, pickle type
Beans - these were given to me by a neighbour. He is a lovely old Italian gentleman whose English isn't strong and I have a hard time understanding him, so I don't really know what kind of beans they are. Pretty sad since I grew up being close with my Italian grandparents and could understand Italian no problem as a kid. Bah!
Garlic - I planted some last fall and spring garlic recently. I have never grown it so this is an experimental year (ha, what isn't!).

I also have corn which has not been planted. I don't know if it's too late, if not I might plant it this weekend. Oh, and some strawberries arrived today. No idea where I'm going to put them.

You might have seen the beds when they were empty and serving as jumps for Hazel. After that, my DH ripped up the grass (which we used elsewhere) and loaded the beds with the new garden soil.  We looped a soaker hose through each bed to make watering easy and to eliminate loss to evaporation. That was then topped with garden cloth that is permeable to water.

One bed, marked out for planting. 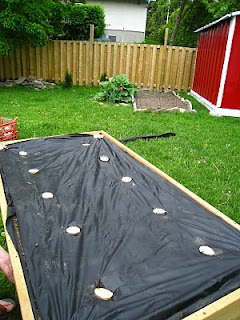 Then planted & layered with cedar mulch. 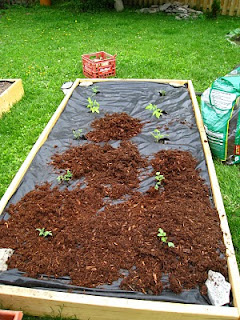 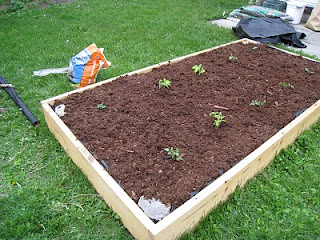 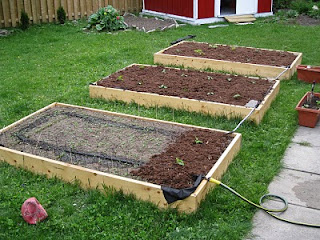 Some of you might remember that when I moved in last year we had a bit of an earwig problem. Well, I haven't seen a single one this year but we have ants. Make that ANTS!!!!!  Like nothing I've ever seen. And there are a few different types. I joked to friends last year that we killed the earwigs and the ants took over. I thought I was kidding, but it's true.


We've been trying the boiled water routine with one particularly large nest that isn't near plants. There are still plenty of live ants, only now they are busy removing carcasses from the nest. I did another round of ant drops today (boric acid solution) in several places and it appears to be successful in that the ants are going for it.

One type of ant eating their last supper (I hope!). 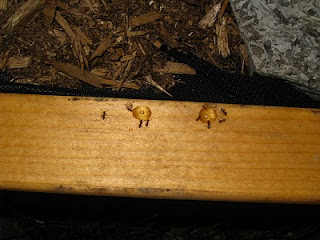 Found this plant almost buried in some false sunflowers
(which are very tall and pretty late summer).
It is called 'Mountain bluet' and it is just gorgeous. 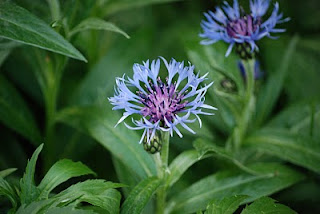 Hastily scribbled by RuckusButt at 11:04 PM

I am so jealous! Looks great. I can't wait to start a garden when I get up to Manitoba. Is there anything you can start growing as late as July?

Thanks! Hmm, Manitoba in July...that's a tough one! Well, for sure some herbs and lettuces/greens. It will probably be quite hot for most lettuce so they would need shade in the afternoon. I usually do some arugula (rocket) in the fall as it grows fast and prefers cooler weather. I'm tempted to say you could try some beets and chard from seed. Ours is growing very fast and we are eating the greens as we thin the rows. So you would at least get tasty greens and possibly baby beets. Seed packets are pretty cheap so you don't have much to lost by trying!

RuckusButt,
I am so bad at keeping on track of how many I plants I have sown too :D Ants! eeek. I had some in the compost bin at the allotment.

Your garden beds are looking wonderful. I am particularly envious of your pepper plants. I have never been good at growing them. I did a bit of catching up in my garden today. surprising how much things grow when you've been away for two weeks.

PS Thank you so much for your last couple of comments, the last one really made me smile and Humbled.

Thank you mangocheeks! It remains to be seen whether those pepper plants will produce for me. The last place I had where I tried them (several years ago) did not work out so well. These beds get sun ALL day and I have the soaker hoses buried and a moisture meter...so fingers crossed!

I like to walk around the garden with my morning coffee and I'm often surprised how much things grow overnight...you must have a jungle after 2 weeks! (But well worth the vacation, I'm sure!)

We need rain badly. Watering just does not equal a good rain.

Saw your comment over on my blog - looks like we might be seeing more of each other out on hacks! I have to say that I didn't really expect to see someone in our city that knew me from the blog! I'll be ready for it next time you see me! Make sure to introduce yourself... :-)

Your raised beds look great... I keep meaning to try a bit more gardening beyond the basics, but always chicken out. :-)

I dont know what it is with ants but here in BC I found a HUGE ant hill for the first time (and I've lived here for a decade!) I've been meaning to do some reading on how to take care of it... though I have to say there is something that feels just wrong about taking out such a impressive work of engineering!

Laura - welcome! I too felt it was a little strange to cross paths with another blogger. I've read your blog off and on for quite awhile and knew you were nearby, but still. I lease a horse across the street from you. That was my first time hacking out on your side - isn't it great they all have arrangements to use each others property? I think the people at the barns along there are exceptional - I've never been anywhere so nice, helpful, and with so little barn drama!

Thanks for the garden comments! It is a labour of love. If you have a very sunny location, tomatoes are pretty easy to grow around here, if you're interested in something to start with.

Chelsi - I know what you mean! They are rather genius...I find it kinda scary. I try to leave them alone where they aren't causing damage to anything important but some areas have clearly been going unchecked for way too long.

Yes the garden is a little overgrow, but nothing like it was when I had an allotment plot. The main casualy was the demise of my chilli plants. They are managing to hang on, but I don't know if they will actually produce chillies.

Once again, Thank you.