I was going to post about my wonderful garden, riding - including a meet up with a fellow blogger that I've been meaning to blog about for weeks. I planned to post photos of the dinner I made from the fresh goodness that I picked today. And the frustration of a horse with a missing shoe for the umpteenth time. I will still do that, but what is really on my mind is loneliness.
I'm kinda lonely. Not always, but often enough. I want to have a ton of fun and live up the summer. But I have a hard time actually doing it. Part of this is because you can't be as spontaneous when you have animals that rely on you. I find few people truly understand this. Those with children think I don't know what it really means to have responsibility and scoff at me. Other people just generally don't understand why I would be so lame "just because of a dog."  After all, half of them have dogs and they don't worry about a walking schedule etc. Occasionally, I will meet someone who 'gets it' and it is like finding an oasis in the desert.
Another aspect is that I have a hard time socializing, sometimes. I can be very social. In fact, those who know me well find it hard to believe that I am ever introverted at all. But I am. I'm pretty comfortable by myself most of the time and this makes it harder to reach out when I am without my other half. I don't tend to realize I am aching for a friend and/or bored until I am in the thick of it. I don't tend to come out of it unless I have to (e.g., new situation) or I am around people I know well. I know, I sound like a loner freak :
~~~~~~~~
In other news...I haven't had much to say about the riding mostly because Brumby was missing a shoe for 2 weeks. Still, some interesting things traspired just before and during, so I'd like to share.
Just before Mr.Shoeless pulled his latest shoe, I met up with a fellow blogger! One afternoon while hacking with my instructor we met another rider on the path. I recognized them but wasn't fully sure, so I didn't say anything. Plus I was a little concerned about it being a touch creepy to be addressed by your blogger name, lol.
I came home, double checked and sure enough the woman we had passed was none other than little keebler.  I had been stopping in to her blog for quite awhile but didn't comment much. I knew she was in my area but didn't realize until I saw her that she was actually boarding across the way from where my Brumby is boarded. We made contact and went for a hack and I thoroughly enjoyed myself. It was also like validation that the connections you make while blogging are real. It IS possible you will end up knowing someone from the blogosphere. I do get weird looks when I say I met her on the internet, while keeping both our blogs confidential, lol. Ah, whatever, it's 2010! The internet is like the subway or bus, you can meet all kinds of people, even normal ones! Not that I claim to be normal...
So, two weeks later, Brumby finally had his feet done. Can I just say that I think a $260 farrier bill is freakin' crazy! I'm used to my half being $80-$90, so $160-$180, which is bad enough! Ouch! Why can't I have a passion for something cheap? Or at least a little less expensive? I started knitting once and made a couple hats and some mittens...maybe I should take that up seriously instead. Mind you, based on my last attempt, I have very expensive taste in yarn ;)  Might as well stick with horses.
So, while Brumby was on light-duty due to being unbalanced with only 3 shod feet, I got to ride a couple other horses.
Last weekend I rode a 4 year old TB/Hanoverian who I've posted about before.  I was the first person to ride him other than my coach.  I wasn't sure how he'd react since I was only the second person on him. He was awesome!!  He's still quite green, he was just started this winter/spring, and started lightly, but he's come a long way since then. I was surprised by how much he knows, especially the lateral work.
Mostly I was impressed with his positive attitude to under saddle work - he seems to think it's all interesting and fun, even though he can be sensitive. What a great attitude to work with! I attribute this to my coach taking her time and introducing new things as he was ready, combined with just a touch of challenge. At one point she said "I'm so proud" and I asked her whether she was proud of me or the horse. Ever the diplomat, she responded, "both of you!" And so she should be, she's trained us both! Though I think the horse is learning faster, lol.
Here's a picture of him, last week.
Looking a little more like a real horse.
Still not a conformation shot, I know. 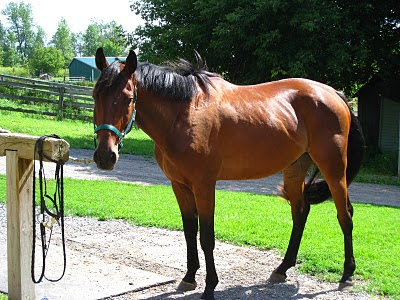 This week,  I rode another horse, a Canadian (yes, it's a breed), in my lesson so I could actually jump a few courses before I lose the little bit of training I've had in this area. The horse I rode is pretty good but still much heavier in the hand than I'm used to. The Canadian rides much like a Fjord, as both are excellent driving horses used for multi-disciplinary activities.

He is a good little jumper but a polar opposite to Brumby in terms of feel, much heavier in the hand. My weak side tends to be my right, though it depends what we are doing. If my back is particularly crooked then I carry my right hip a touch higher. This leads to me not being as strong in my right lower leg. Guess what happens...

One stride before an oxer that was 2'6" or 2'9", I lost my right stirrup. I knew at that point there is nothing we could do but go forward. The sequence was a combination of a similarly sized vertical, followed by the oxer. The vertical rode well but he was "looky" at the oxer and, as is his tendency, he started to drift right. Being my weaker side, it was hard to keep him straight. Plus my stirrups were set for flat work and I was having a crooked day.

Like I said, there was nothing for it but to hope for the best. You can't pull up one stride before a jump like that! So over we went and as we landed I picked up the stirrup. The jump itself wasn't the prettiest because I wasn't balanced, having one foot in a stirrup and the other not. Still, I think I get a few points for staying on and picking up the stirrup right away on the other side and continuing the course. Lol. Good staying on, as my coach said, but I'd prefer not to lose stirrups in the first place!

This happens to me once and awhile and although I'm happy I can adjust my balance enough to ride through it, I would much prefer it didn't happen in the first place. I'm pretty sure my fitness is the main issue. I want to do more cross-training, I just find it hard to have the time, energy, and motivation these days.

Um, I don't have a nice conclusion for this post and I am sleepy, so it'll have to stand as is.
Thanks, as always, for reading!
Hastily scribbled by RuckusButt at 12:58 AM

Melissa and I get it. We're all a little bit that way. If I'm in the mood, I've never met a stranger, but I'm not always in the mood. More often than not, Melissa is the loner bitch...er...loner freak, in our house. :)

I get it too! Because I'm very much that way myself.

Thanks for the support guys! It really IS nice to know others experience the same thing(s).

The para. you wrote about being an introvert and social but not very social at the same time? I'm like that too - it was kind of interesting to see someone else's words write out how I feel most of the time! My sis-in-law is a total extrovert and doesn't understand why I would rather be at home doing stuff instead of at her house with her 4 kids... :-)

Glad you had a good ride with Rusty and I - we'll have to do it again soon. Also - maybe when your hubby is back in town - you could bring Hazel and go for a walk over on our side - dogs are welcome as long as they stay out of trouble... :-)