Brumby went to his first horse show of the year this weekend! It was also his first show over fences.  Our coach rode him in the baby green hunters and his owner rode him in the hack division. I didn't ride...I don't have show clothes and determined that I couldn't (i.e., shouldn't) afford the expense this year. Just too many things demanding large amounts of money with the new house. And this ol'laptop has been telling me it is going for the big sleep soon. Plus, I haven't been to a horse show since I was a kid so I thought it would be enough to groom for the day and get used to the chaos :-) 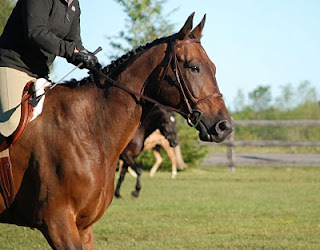 He did really well! Between missing shoes and the excruciating heat we had a few weeks ago, our coach has only ridden and jumped him a handful of times. Still, they took 4th in both their classes. I don't know exactly how many riders were in each class...it's confusing. They do these sets of doubles and triples where a pair rides one course, then someone else goes, and then they ride their second course. I think. I'm assuming this is so you don't have to keep the horse warmed-up for an eternity. I haven't had the chance to debrief with my coach on all these questions. I'm totally green! And I was taking photos, so my attention was divided. Anyway, I think there were at least 15 riders or so in each class. 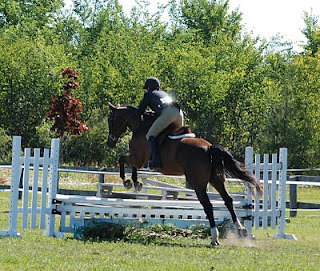 It was a great learning experience for me. My coach had me go study the course diagram and come back and tell her the course, including the striding. I'm quite sure she knew it and was just asking so that I could get the practice. It was definitely good for me and I was somewhat surprised that I was able to do it. I think I will have issues remembering multiple courses when it comes my time to ride them though. Hopefully I'll get more practice before then!

The only thing I didn't like was the underlying assumption that I would be slave for a day, so to speak. I mean, I was there to help, of course. But sometimes I felt like I was being treated (not by my coach) as a paid groom, as opposed to a paying leaser who was helping out. Oh, and getting up at 4am after 4 hours sleep...why do we do this?? And why are we so keen to do it all again???

******
Hazel has had another bout of diarrhea lately. This time I thought for sure it was the treats she had at daycare because it was the only change - she had been fine, then at daycare all day and with me all night. The next morning I could tell she wasn't right. I came home at lunch and she seemed fine and didn't want to "go". When I got home from work she met me at the door, panting. That means only one thing.

I let her out right away and she started the pacing, squating, and stretching that I was afraid of. It was horrid, like someone turned on a hose. Sorry for the graphic description but I think everyone that reads here are animal owners and therefore can take these things! Then, later, what she produced was more solid but had blood. It was obvious it originated in the large/lower intestine because it was bright red. This can be caused by anything from simple digestive upset to more serious issues.

Thinking of daycare and the upcoming show, which I planned to bring her to, I took her to see our vet. She told me she's seen a lot of this type of thing this year, more so than other years. Given our history though, recent and past, she felt it was most likely a food-related upset. Nothing probative showed up in her fecal sample, either. Plus, our monthly heartworm prevention includes many other types of deworming and parasite control, something I choose for a reason. So, I got a cautious "ok" to take her to the show - the concern being that people love to give dogs treats which could exacerbate her issues. I did have her put some meds on standby, just in case. I didn't want to just medicate without just cause and I can pick them up anytime, 24-7.

If I had a choice, I wouldn't have brought her, just to be safe and responsible. But my hands were kind of tied, without my husband here to look after her. She had been fine Friday and (early!) Saturday, the morning of the show. I felt pretty confident that her guts were recovering from the treats. We enjoyed a great day and no one gave her any treats at the show. Her poop was better than ever after that - I attribute this to her sneaking morsels of horse poop. She always has nice poops after eating horse poop *sigh*

But Sunday morning we were back to non-normal. And this continued throughout the day, though her eating habits and energy remained at it's normal, high, level. Then, Monday morning, she woke up with one eye completely crusty. It took me awhile with a warm wash cloth to remove the gunk. Hmmm. It could be related and it could be something else entirely, like a bug bite near the eye, debris, or a corneal scratch.  So, I picked up the metronidazole and started treatment. I also flushed the affected eye with an eye irrigation for dogs. Fortunately, I had some of this on-hand.

I suspect a low-grade giardia infection. It can be hard to detect in analyses. At this point, I felt the pros out-weighed the cons of medicating without knowing for sure what's up. Worst case is she does a course of antibiotics for nothing. It's not ideal but it's not the end of the world either. Given her similar issues a month ago, I am now comfortable trying this route and I really want to do everything I can to prevent spread if it is something infectious like giardia. Things seem to have stabilized in the last day but I've canceled her day care for tomorrow, just in case. This means I probably won't be able to go to the barn after work.

I'm sad for my poor pooch. And for me because I constantly worry, drive home at lunch, can't ride tomorrow. Oh, and tomorrow is my last day in my job, I start the new one on Thursday. August 20th, the day my husband comes home AND the start to one week off, can't come soon enough!
Hastily scribbled by RuckusButt at 11:02 PM

Most likely at the show you attended they had two over fences classes per division plus an undersaddle. Most people do their first course, someone else goes in the ring and does their course, then you go right back in and do your 2nd course. This keeps things flowing a lot more smoothly (at least that is the idea!) especially if someone is riding more than one horse in the division, and as you said you don't have to keep warming up the horse over and over.

H/J shows kinda confuse me... Glad you had a chance to go and learn the ropes a bit, even if you were an overworked groom!

Poor Hazel! Hope she is feeling better soon - the medications should help, I hope! Dealing with dog "digestive issues" might not be the most fun way to spend your week off!

Melissa - I thought you would know! I figured it was something like that, except it seems like some people had 2 courses and others did 3? I'm sure I'll find it all less confusing by fall!

Laura, I agree they are confusing. And everyone else seems to know exactly what is going on, lol. I'm semi-grooming for my coach at the Richmond Fair this Sunday. She's not riding in any classes but we are taking that baby (4 yr old) I posted about before to get him exposed to the show atmosphere.

I felt bad complaining about my role last weekend. I think it was mostly just different expectations, you know? I'm new to the life and I guess the inner diva comes out of riders during a show, lol.

Hazel is doing awesome! Even better than the month between "episodes". You know how sometimes you have a feeling things aren't right but there is nothing you can put your finger on? That's how I've felt this last month with her...nothing was really wrong, but still. Now, that feeling is going away and I couldn't be happier about it!

I should be at the Richmond show on Sunday - some girls from my old barn should be there. Hopefully this nice weather holds!

RB there was probably a schooling round that you could do as well, so if you entered that you would do 3 courses. After a few more shows it will all make sense!

Ah ha! I forgot about that. Yes, there was a paid schooling round option.

Laura, I'm guessing you didn't end up going either? I was up at 5 and got to the barn minutes before the show was cancelled. I rode 2 horses (well, the first one was lame, so it was only 10 min) and was still home before 10am! I don't know about where you are but we had thunderstorms on and off (mostly on) all day.