As you've seen, most of my garden is growing amazingly well. Especially so are the cucumbers! I only have 2 cucumber plants and they are a small, pickle-type variety that are also tasty if you just want to eat them raw and are known for being prolific producers. I thought this would be a perfect variety for maximum flexibility, and it is.

Despite all this picking, I somehow missed one and ended up with a monster.

The smaller pickle is actually one
that is already on the large size. 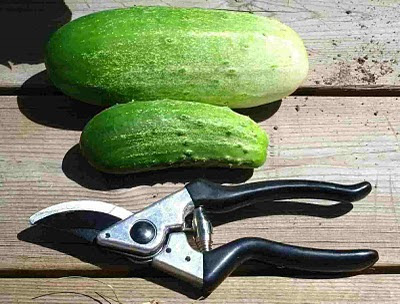 It was hard to capture the size of this sucker, so I placed it in my hand, for reference. 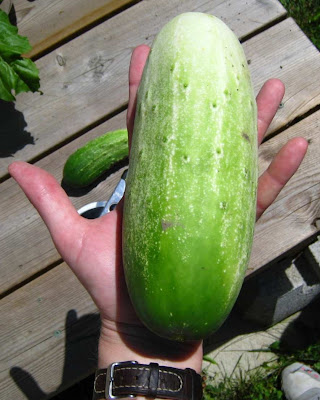 I figure I'll put that one in a gazpacho since I also have no shortage of tomatoes. 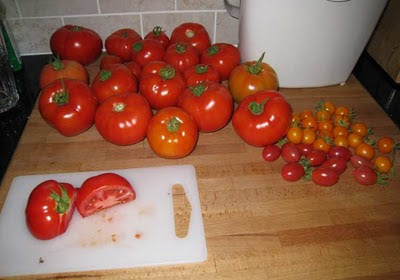 By Saturday, I had gathered everything I needed to make pickles. There was no way I could eat that many and I had given away a lot already. It was time to "put up" as they call the act of preserving summer's bounty.  I've never made my own pickles but have always wanted to, so I was excited. Ha ha, yes...this kind of thing makes me very happy! I've made a ton of different salsas, chutneys, hot pepper jelly, fruit jams & jellies, pickled beets, turnips, and mixed vegetables...I'm probably missing something. This is all stuff I've learned as a late teen or adult. My mother thinks it's amazing and doesn't understand where I get it from, but is happy to reap the rewards  ;-)

Weighing out the cucumbers. I only had about half the amount most recipes call for. No matter, 4 lbs would be plenty. 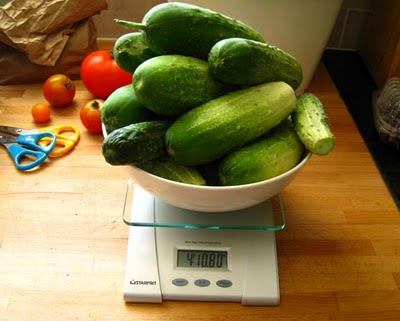 The "gear" all set out and ready to go. The pickling brine with pickling spices were already on the stove. 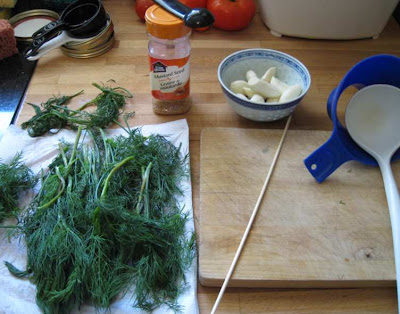 I fully intended to take pictures of each step but once I started there was no way to stop for a photo. 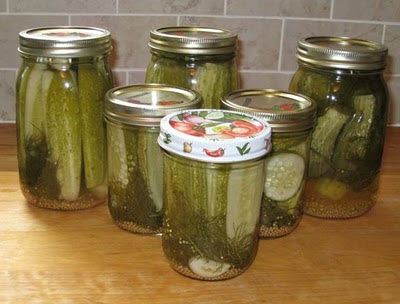 I have learned the benefit to harvesting while the cucumbers are still small. It is hard to fit them in the jar when they are that big! So, I did two jars in spears, one jar of "slicers", and two of whole, smaller cukes. I was left with some odds and ends and one whole cuke, so I sliced the cuke in coins, added the other, um, remnants, to a jar and pickled them too. No point in wasting anything after having them in brine all night!

Since I had an extra long weekend, I took the opportunity to spend more time in the garden today. The carrots have needed some attention for awhile, so I pulled more of them. It seems today was the "ugly" carrot day. I've been impressed so far with the shape of the carrots I've harvested. They have all been well-formed and straight, I expected more misshapen carrots. Today, I got them. I also pulled something else...the top looked almost like a carrot but was noticeably different from the others. I think maybe a wild parsnip?


One of these things is not like the other. 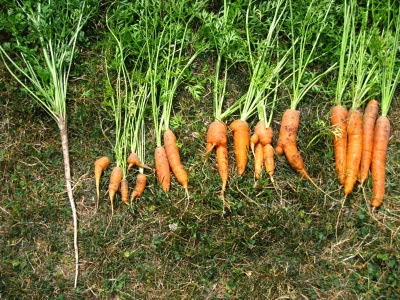 You know how carrots that have grown funny sometimes look like a pair of legs? Well, I had one that looked kinda cute.


Looks like a lovely [carrot] lady from behind, doesn't it? 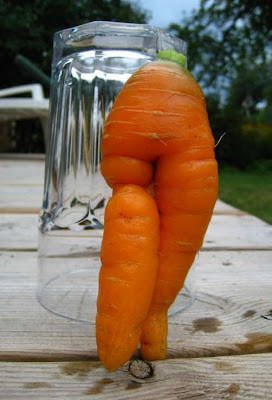 That is, until you turn it around! 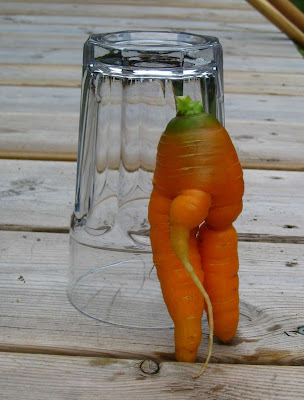 Equally scandalous, at least to me, is the number of apples I have to clean up. My apple trees were left alone for far too long and therefore are not good trees. I appreciate having large trees out back and also the privacy they provide. However, I don't appreciate the large number of apples I have to rake up every week. I can't even eat any of them since the tree is way too tall to harvest from and the ones that hit the ground are not really edible.

I rake them into piles that I can then shovel (delicately) into a bucket, which I then transfer into a variety of places - our backyard compost bin, the city compost bin, and the city yard waste bags. You see, there are too many for any one place!  I should find someone with goats and ask if I can borrow them for an afternoon!!


I wish I could get a photo that captured just how many apples there are.
Keep in mind I cleared the ground only a week ago! 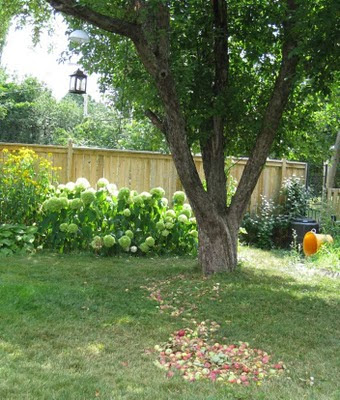 The raking is annoying, at best, and stressful since there are so many wasps and other bugs around. Naturally, they love the rotting apples. To add insult to injury...or rather add (potential) injury to insult (having to clean so many rotten apples), more apples are falling as I work. Many narrowly miss hitting me. I had an arbourist out last week to look at a few trees and he confirmed these apple trees aren't worth trying to rehab.

Ok, so I don't love cleaning up rotten apples. But at least it smells nice while you're doing it. Apple aromatherapy, lol.  And this space is mine. I try to remember that just a year ago I was in an apartment with no yard at all and trying to grow things on my balcony!  Makes me want to hug an apple tree. Almost.
Hastily scribbled by RuckusButt at 9:07 PM

I hear ya about the apple tree. We had a small apple orchard in our yard when I was young - I had apple cleanup flashbacks seeing your pile of apples!

My grandfather used to pay us a dollar to pick up the apples and chuck them in the corn field. (he may have encouraged us to sharpen a stick, put the apples on the stick and see how far we could toss them...fun times)Kinda hard to do that in the city!!

Your carrot pictures were hysterical - thanks for the laugh!

I thought you guys might get a kick out of the carrot :-)

Laura, I've actually thought about paying the neighbour's kid. He will help out but he charges a fair bit, lol. Kids these days! Yeah, I don't think my neighbours would appreciate me chucking the apples in their yard!

I got your other comments too. I'm glad you can relate. I'm not surprised though, since it was so easy to feel comfortable around you! Easy conversations and also easy silences, which are usually more telling.

As for bringing Hazel, it sounds like a plan! I was actually thinking of bringing her on our next ride, since it was so quiet on my side that early. The BO said it wasn't a problem for me to bring her, since we talked dog training, as long as she's with me obviously. I just don't want other boarders to wonder why I got permission, so I've been reluctant. It would be even easier once hubby is in town, you're right.

Very interesting! Found your blog via Laura a few days ago, but Blogger isn't liking my wordpress identity.

You can always donate those apples to a boarding stable. I'm sure they'd be appreciated. As for goats, well... Goats are as likely to founder from too much of a good thing as horses, only it takes less since they're smaller. So, goats can have them too, in moderation.

Also, there are these apple picker fork things (not the ones we clean stalls with) that have a basket so you can reach up into the tree to harvest apples. My husband's grandparents had an orchard when he was growing up so he has lots of experience with these kinds of things.

Welcome Oregon Sunshine. Good suggestions...but I could barely bag the apples and get them to the curb, let alone the barn! Plus they are mostly rotten and full of ants, earwigs and I'm sure other bugs, so not only would the boarders probably not like them but there is no way I'm putting them in my car :)

I'm aware of a few apple pickers like the one you mention. Unfortunately my tree is far too tall and only one small branch would be in reach.

Re goats - my comment was meant as a joke. I guess that wasn't as obvious as I thought. Founder isn't funny...but the thought of a couple goats hopping around my yard sure is!