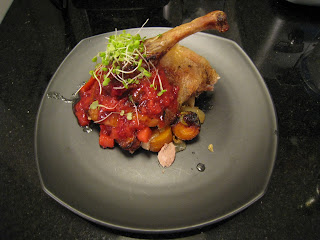 This recipe comes from Jamie Oliver's book "Cook with Jamie" and, like everything I've tried in this book, it is spot-on.

Preheat over to 350F (I have a convection oven and so I roasted at 325, raising to 350 for the hour). Put 5-6 sage leaves in mortar & pestle and bash together with salt. I only had dried sage and skipped this step. I'm sure it's worth having fresh sage but it is still absolutely delicious with dried. Rub sage and sea salt all over skin of duck. Place the rest of your sage and the orange halves inside the duck cavity.

For the vegetables, our carrots were not peeled. They were carrots that we had frozen very soon after harvesting from our own garden, so we prefer to leave the peel on. It's your choice. I DO remove the skins from the garlic.

Choose a roasting tray that will fit the vegetables and duck snugly. Put the veg and garlic into the pan and put the duck on top, breast side down. Roast for 2 hours, turning over a couple times during cooking. You will probably need to drain the fat halfway through. Jamie says not to throw the fat away. Separate the fat from any meat juices, strain through a sieve, and it will keep a couple of months. Use to roast potatoes. Well, if he insists, right?

These steps happened while I was at the barn, so no photos, but you can imagine my excitement when I came home (hungry!) to find a duck in the oven! I was soon put to work making the chutney. 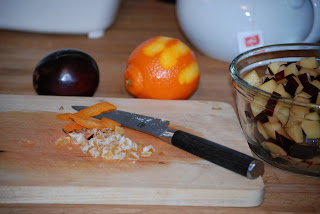 Add sugar to saucepan and add just enough water to dissolve it. Place on heat, drop in cinnamon and star anise and bring to a boil. Simmer until the syrup reduces right down and the bubbles get bigger. 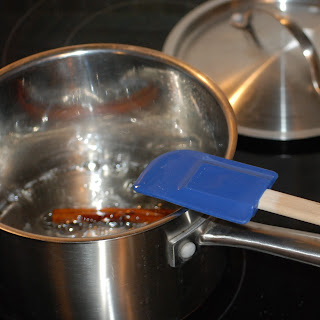 As soon as the syrup just starts to turn golden, add the chopped plums, orange zest, and cumin. I had 2 slices of candied ginger which I also chopped up and added in. The plums will release their juices and begin to cook down after awhile, into a thicker consistency. Take pan off the heat, season with salt and pepper and set aside. 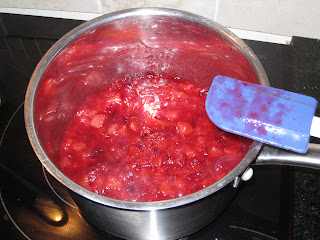 For the last half hour, make sure the duck is breast-side up so the skin can get crispy. Leg meat should come easily off the bone when the duck is ready. 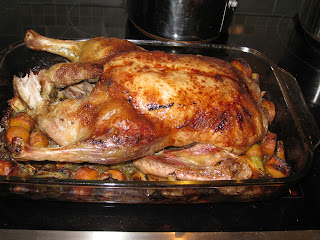 Serve atop the lovely roasted veg with the plum chutney and some watercress (we used micro greens) on top to garnish. 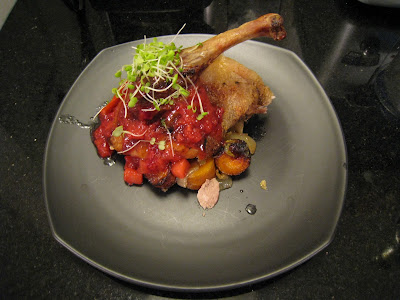 Hastily scribbled by RuckusButt at 8:17 PM

I SO wish you would come to our house and make dinner!!

Word verfication: brumba; they almost got the name right!

NOW I know what to do with the duck in the freezer!
Looks absolutely delicious...

Hope you find out about Brumby. I get worried about the rearing part. Take care of yourself!

Melissa, I could be persuaded, lol.

Go for it Maria! I recommend giving the plum sauce a taste, mine was too tart. I didn't want it too sweet but went too far the other way.