I received an incredibly nice offer from Laura over at Little Keebler when I posted about my difficulty in getting Brumby to hack out alone in this post. She told me I could ride her horse Rusty, if I ever wanted a nice trail ride without the theatrics I had battled with Brumby. Isn't that incredibly nice? I think so!

I like the work and progress part of riding, but now and then just really want to putter around on horseback, take my time exploring with a horse, relax, etc. I love to trail ride! So it's tough that I can't do it consistently with Brumby, I never know what he will be like. I have some ideas for helping this, but that's another story.

This time of year is touch and go with weather and footing but I thought it would be a good idea to get to know Rusty and the barn before an opportunity comes up to actually ride him. It happened that Laura and I were both off work for the day, so we arranged to meet at her barn in the afternoon.

It was a nice day but somewhat windy. I had a good ride on Brumby and made it across the road, only a little late. Well within "barn-time" expectations, I'd say!

You know, Laura and I haven't met up many time before...maybe once or twice (?) and otherwise our communications have been via email or blog. I have to say, it's really nice to meet someone who is so easy to be around, even when you don't know each other all that well. I do regret not having the chance to talk about some other topics we have in common. Oh well, there's always next time!

So I got the tour of her barn and we groomed and tacked up Rusty. I felt a bit like I had two left arms when it came to cinching a western girth. I've ridden in western tack before, but it's been awhile and cinching is just one of those things I'm not fully comfortable with. Laura showed me how and I think I'm feeling more confident about getting it right. Rusty was, of course, a perfect gentleman.

I climbed on the mounting block and had to smile at how high above Rusty's back I was. That's fine by me! Off we went, and Rusty felt like he was pretty forward and happy to move out.

I have no idea why I look so unimpressed!
I must have been just pre-or-post smile, I certainly wasn't as sour as I look!
Look at Rusty's adorable ears, doesn't he look ready to head out? 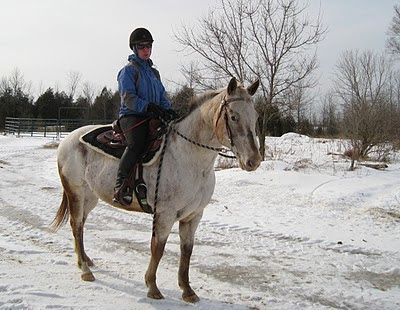 We went along a little way, Laura and I chatting about this, that, and the other thing. I was relaxed and enjoying myself. Suddenly, Rusty did a little spook/spin/buck/bolt like thing. None of these were very severe or anything, it's mostly that I didn't really realize what was happening until we were in the middle of it.

We had a couple other instances of "Are you sure you want to go that way?? I really think you'll find the barn much nicer"so we just went a short way up the trail and called it good. I didn't want to force the issue if he wasn't comfortable and I guess I don't know him well enough yet to push him past it. If the footing was better I might have been more firm, and he did go forward when I insisted. I was happy to call it a day on my terms and have a nice intro ride.

We really are lucky to have nice areas to hack.
It's beautiful even with the winter starkness.
I got tired just watching Gypsy the border collie
run around. She is tireless! 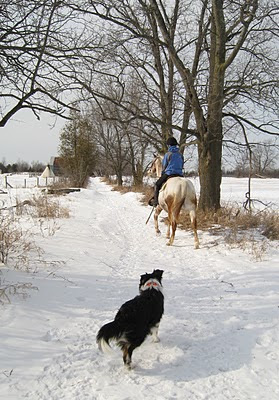 In our area, winter riding outside is sporadic at best, so he might just have been reluctant to head down the trail. It was also pretty windy and the footing ranged from quite good, to deep snow, to crunchy snow, to icy. I joked that maybe it was me making the horses bonkers on the trail. Laura laughed that she offered her nice quiet boy for me to trail ride and I got a little drama off the top, lol.
Personally, I think Rusty heard all this talk about him being so reliable, calm, and enjoyable, that he thought he'd better show us he has some spunk! 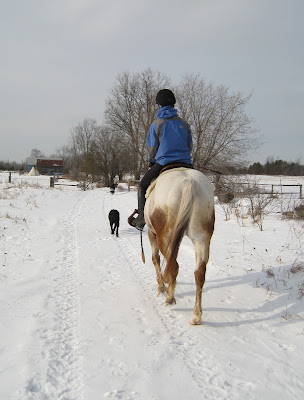 All-in-all a great day off filled with dogs and horses, finished off with friends and wine. A good day indeed!
Hastily scribbled by RuckusButt at 1:01 PM

How awesome is that! Laura is so nice to let you have a "day off" so to speak! I wish folks I have met in the blogosphere were close enough to me and Bodhi to do the same! What a cool experience!

What fun! Glad you were close enough to take advantage of her offer - looks like fun for all concerned.

It IS pretty awesome! I had been reading Laura's blog before I knew that she boarded literally right across the road from my barn. One day I rode past her while out for a hack with my coach. I recognized them right away but was a little doubtful. Plus I didn't want to be creepy, lol. I mean really, what are the odds? So I sent her a message later and sure enough, the world really IS small. We share the same employer, to boot!

Golden - if you're ever heading to Ottawa, let me know ;) Not quite as cold as Winterpeg and LOTS of barns.

I can't wait until spring is here full force, can you??

Well, thanks for the nice post... It wasn't quite the nice relaxing ride that I offered, but I guess it could have been worse. lol

Animals have a way of making us look bad sometimes, it seems. :-) The footing was pretty crappy and I was wondering if he would've been better without me walking alongside? Who knows...

In the spring, we will get you out on a relaxed hack, whether it be on Brumby or Rusty.

Speaking of employers, (now I'm the one that gets to be creepy) - if all goes as planned, we'll be working in the same building by the late summer! I'll probably need a tour, since I'm used to a smaller building!

Lol, it's so true! Hazel is a master at making me look bad sometimes when someone talks about how good she is! Murphy's law.

That will be great if you're in the same building! I still don't know my way around everywhere, just the important places like cafeteria and where to bring expense claims ;) It's a nice place and only about 20 min to the barn. This is one of the topics I meant to ask you about!

Well, we'll have to meet up again sometime to discuss those other topics! I could come over and take some pics of you riding Brumby or something...? I'll try and do a bit better and get one of you smiling!?!

It's been my experience that horses are just like kids, the minute you say something about them, they make a liar out of you. Sounds like that's what Rusty did. LOL

Glad it all went well and you too are building a relationship outside of the blogosphere. That's very cool!

How very nice to meet a blog friend "live" and it sounds like you had a good time too!

That's wonderful that you got to meet Laura and take Rusty for a ride. They always surprise us don't they?