Well, not quite just yet...but after a shopping spree yesterday, my wardrobe is secured. 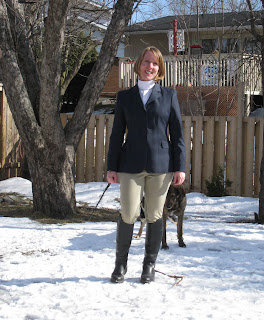 I purchased a new jacket, shirt and breeches.  I got some seriously good deals but the total still made me cringe a little!  I believe it's almost never a good idea to go with low-end products. They either don't last or are uncomfortable or don't work like they should. I felt pretty strongly about this with respect to a jacket especially. I figure I will have enough to worry about on show day without having a poorly fitting jacket to fuss with. So I ended up going for a beautiful R.J. Classics jacket that I had been drooling over last year. Only last year it was full price at $525 (aka ridiculous) and this year it was $199. In my size!! It's still a good bit of money but I think it will be well worth it.

I love the Grand Prix breeches I got so much I'm tempted to go back and get another pair for "everyday" riding. But I think I'll let the bank account recover a bit. The only pair I liked better were Pikeur and I just can't justify that. Maybe after a few show seasons, but not now.

I am SUPER excited. But also terrified because now I am committed to show :)
Hastily scribbled by RuckusButt at 9:48 PM

Well whistle me Dixie and shuck my corn ! Looking good in your new duds, RB ! :)

Lookin' snazzy!!! Good job getting the jacket on sale too... Hopefully it'll last a few seasons.

Hope your finger/hand is feeling better too!

Aw, thanks guys! At least I'll look the part, regardless of how the show goes! I think the coat will wear well, it's 100% wool which I understand to be far superior in terms of wear. I guess time will tell!

The hand is doing better. I think it'll be slow to come back fully but I'm thinking of doing a couple sessions of physio to help it heal properly.

Did not realize you had another show planned - good for you! Love all the brands you bought, RJ Classics and Grand Prix are good ones. I also like Ariat and Tailored Sportsmen breeches as well. Why do breeches and jackets and tall boots have to be SO expensive?? Their price tags seriously limit my ability to fill my closet with good horse clothes.

Wow, you look really good there RB!!
The riding jacket had a very nice fit. How lucky you were to get it at a reduced price, even if it still was expensive.

Yeah, that schooling show I did was partly in prep for this summer's show season. Truthfully, until a couple months ago I didn't think we'd be ready but it's all coming together. It looks like I will be doing training hunter (2'6").

Ny blouse is a Tailored Sportsman and I think it's quite lovely as well. Yes, I treated myself well ;)

Thanks Maria! I feel very lucky to do as well as I did/

I'm with you on buying quality. I did the same thing years ago and my jacket still looks awesome and fits great. It's a great investment and I think it adds to confidence too when your clothes fit right and feel good.

Good for you. You look awesome!

Thanks Rainbow, that's good to hear. My jacket fits pretty well with just enough extra room not to split if I get jumped out of the tack ;)

I'm like a kid and have to go look at and gently touch my show clothes once in awhile, lol.