Tonight I asked my husband Alex what title he would give to our dinner. He instantly responded, "Snappy Anniversary."  My original title was going to be something like "Wild Red Snapper Bathed in Herb Butter"...I went with his suggestion. Today is our 4-year wedding anniversary and it's also been 12 years since we first started dating!
It sounds like such a long time but really doesn't feel that long. While it feels like I've always known him - we met at 18 because we both rock climbed at the same gym. It wasn't until 2 years later that we got to know each other a little more and went on our first date. Timing was right and so was the fact that neither one of us were into the game-playing that was typical of our age group and past relationships.
So here we are, at 32, celebrating an adult life together that has undergone many changes. From undergraduates, to Masters and PhD students, to professionals. From living in 2 rooms of my Mom's house, to our first tiny apartment, to living in different cities, and finally buying our first (dream) house. It's been a good progression but you know what?? It still seems like we are in our early 20's. Sure, now we can afford to do many of the things we want to do but not much else has changed. We have more responsibilities but we are just as fun-loving and silly as ever. At least I like to think so!
The only down side is running into my husband's students in places like the liquor store while buying wine, or the retail store while I try on new work suits. I shop away from downtown just to avoid this!

Ok, so the business at hand --- dinner!  I am SO behind on food posts!! Tonight was simple fare because we had to pick up our locally-made rain barrel after work and it was a little ways away from us. I decided we should stop at a good fish monger that I know which is in between our rain barrel location and home.


So, we walked Hazel at a dog park closer to where we heading for the rain barrel. There, we ran into friends (canine and human) that I knew from my time in Guelph. I had just finished saying to Alex that the dog looked like so-and-so...when the dog's owner and I made eye contact! So cool! Hazel and her friend definitely recognized each other, even though it has been about 3 years!
After our reunion, we went to the fish monger and picked out some wild BC red snapper.
I mixed some softened butter with dill, lemon zest, salt, pepper, and a homemade dried blend of hot peppers, onions, garlic, and parsley (we call it "Sasha's blend" because Alex came up with it and "Sasha" is the nickname for Alexandre in Russian, so that's what I call him. I spread this over both fillets before baking. It wasn't much butter but made it like it was poached in herb-butter.
I also made a mayonnaise with lemon zest, dill, lemon juice, pepper, and our special blend of spices. Served with rice and steamed snap peas. Simple and delicious! 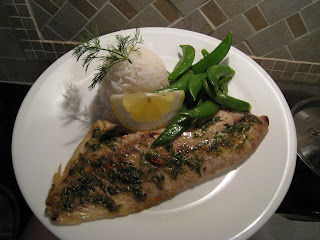 Hastily scribbled by RuckusButt at 1:16 PM

Happy Anniversary ! And congrats on your fantastic rain barrel and good dinner !! :)

snappy anniversary to you guys! I don't like fish, but I'm sure your dinner was great...!

PS - we need to get out for a hack together sometime soon!

Laura, I think I actually conquered the boogey men for Brumby! I'm definitely up for a hack if the weather cooperates any time soon :)

I missed this post somehow - Snappy Anniversary to both of you!!

And the fish looks delicious...you got me inspired there. Maybe for tomorrow? Hm.