There is a horse I am interested in. I am not at the place where I would buy him just yet, but I have been keeping my eye on this guy for over a year and have ridden him several times. I want my first horse purchase to be as educated as I can, so I'm trying to get to know some potentials. It's a hard thing to do when you aren't sure exactly when you want to buy. Also, I don't have the time I would like to ride Brumby, let alone other horses (although I always convince myself that I will!). For the last few months, I have been really consistent in riding, except for missing 2 rides after surgery and one due to inclement weather (a combination of over 43 humidex plus a later thunderstorm). I have been very, very happy with this and I really hope I can keep it up once Alex leaves in a week.

When Brumby pulled a shoe and the backup farriers were apparently incapable of keeping it on for more than a day I thought we would be set back quite a bit without being able to jump the grass course. It was a hidden blessing though because it gave me another opportunity to ride this particular horse. It got me thinking again about his potential for purchase.

You've met this guy before, if you've been reading for awhile. He is TB/Hannoverian, about 16hh. Not the best conformation but not too bad either and when he's in good weight and muscle he looks much improved. 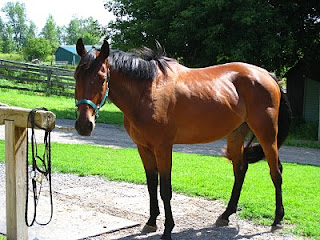 Around here, show-ready but perhaps a touch green or inexperienced horses can still go for $15-$20,000. It's hard to say exactly what that type of horse actually sells for, versus listing price, but I know a few talented, very seasoned, show horses that sold for around $8,000. This guy's asking price is in the 8k region but I'm guessing I could do even better than that for him. And he is nicely trained, started slowly, and is really coming along well. I love riding him and most of our hiccups are simply because I only hop on him once or twice every few months and he is such a different horse from Brumby.

In so many ways, he is the perfect horse for me. Yes, I would still consider him pretty green, but he's more mentally mature than Brumby, despite being 3 years younger. His training and rideability are also more advanced than Brumby's were when I started leasing him almost 2 years ago. In fact, he might be more advanced even now, especially since this guy has never had the bad training that Brumby had. Plus he's in a training program with someone I trust.

All things to love. Except...

Except he seems to have an issue with keeping weight on. He seemed pretty slow to mature and didn't even begin to look like a horse until the late spring/summer of his 4th year. He wasn't started under saddle until then, which I think was a very good decision. He did have some handling and basic groundwork before then and is good with everything but still has some minor greenie issues.

It's not like he has ever looked like a starving horse, he just looks a little thin and underdeveloped at times. He can also look quite good, when he is being fed extra grain and in regular work. Even then, he stays slim. Perhaps it's the TB blood? I'm told his dam, who they knew well, was very light in build.

I don't mind a horse that is naturally lean, in fact I prefer it to over-muscled or over-weight. But this past winter the horse was put out 24/7 for a couple weeks and stopped getting any grain because my coach/his trainer thought he was still coming in at night at which time he'd be fed. . He dropped weight shockingly fast. Now, this was also Canadian winter and he has never worn a blanket in his life. He also lived outdoors until he started training at which point he was in from about 8pm to 6am, so he's well acclimatized. He is fed free-choice hay of good quality (I doubt it's great but all the horses do well on it) and although I don't know exactly how much, he has recently been switched to Shur Gain Xplosuion plus gets something else (a vit/min balancer, I think) and vegetable oil. It might seem weird that I don't know the details but again, this isn't my horse.

I guess what it comes down to is if there is some kind of screening I could/should ask for during a vet check and if so, what?  As with all things horse, it could be so many things, so if there's a blood test or something that could eliminate a problem I won't be able to fix/manage than I'd like to know.

I've already spoken to his owner about getting his teeth done, so that should happen soon. He is on a regular worming program along with the rest of the horses boarded there. I feel pretty sure that if I *ahem* I mean someone, were to really put their time and love into his care, he would flourish. I would start with teeth, re-evaluate his feed (also known as asking Jason tons of questions!), and probably blanket during the winter (although he will honestly shred them to pieces within days).

My idea so far is to lease him in the fall if he hasn't sold yet. I'm ready to move on from Brumby, regardless of how our show season goes. I've talked to the barn owners (they own him) and they are happy with that idea. Well, they would rather me purchase him, I'm sure! The entire barn is pretty much convinced that he should be mine; I am trying to be a little rational about the decision. Famous last words!
Hastily scribbled by RuckusButt at 10:11 PM

It can take six years for a horse of that type to be fully grown out and at a stable adult weight. On the other hand, I'd be curious to know what his diet consists of and how much grain he's getting in addition to his worming schedule.

I wanted to come by and say Thank you so much for your encouraging and kind comment on my blog.

Your right I should try and enjoy the 'time out' and not stress too much, a job will come up eventually :0) I will certainly try. Re the cookbook, its a kind thought and one i am now seriously starting to think about. Thank you so much for your faith in me. Really means a lot. Thank you. Kindest of wishes.

Oops, that wasn't supposed to post! I will edit and finish it later - still having computer issues.

Also sending you an email about some other stuff.

Jason - I will look into quantities this week and give you something more specific.

Shaheen, I meant every word. I'll comment over at your place.

Laura, on to read my email. You saw me riding this guy Friday, I rode Brumby later. I don't think you caught our finest moments as the lawnmower guy was giving us a horse-eating moment!

Seems as if this little guy has captured your heart, RB?

I believe your plan with keeping him a year before purchase sounds like a super decision, if that is a possiblity. If there is anything more than the TB genes you'll find out.
You will also find out how he will behave with some more muscles and strength. Often the teenager awakes a bit ;-)

Good luck, this will be fun! (for that anyone that goes for this option, I mean)

As Jason pointed out, a lot of those warmblood crosses don't fill out all the way until 7 or 8. Keep in mind, he may still be growing (not necessarily upward), which burns more calories.

He might have a mild issue with ulcers, or need some probiotics, or a more comprehensive deworming program. None of these is a deal breaker if you like him =)

I admire your thoughtful approach to buying a horse. Sounds like this fellow may be the right one. You'll know. I hope you get to try him out for awhile. He's pretty. His face and coloring remind me of my beloved TB gelding of 25 year ago.